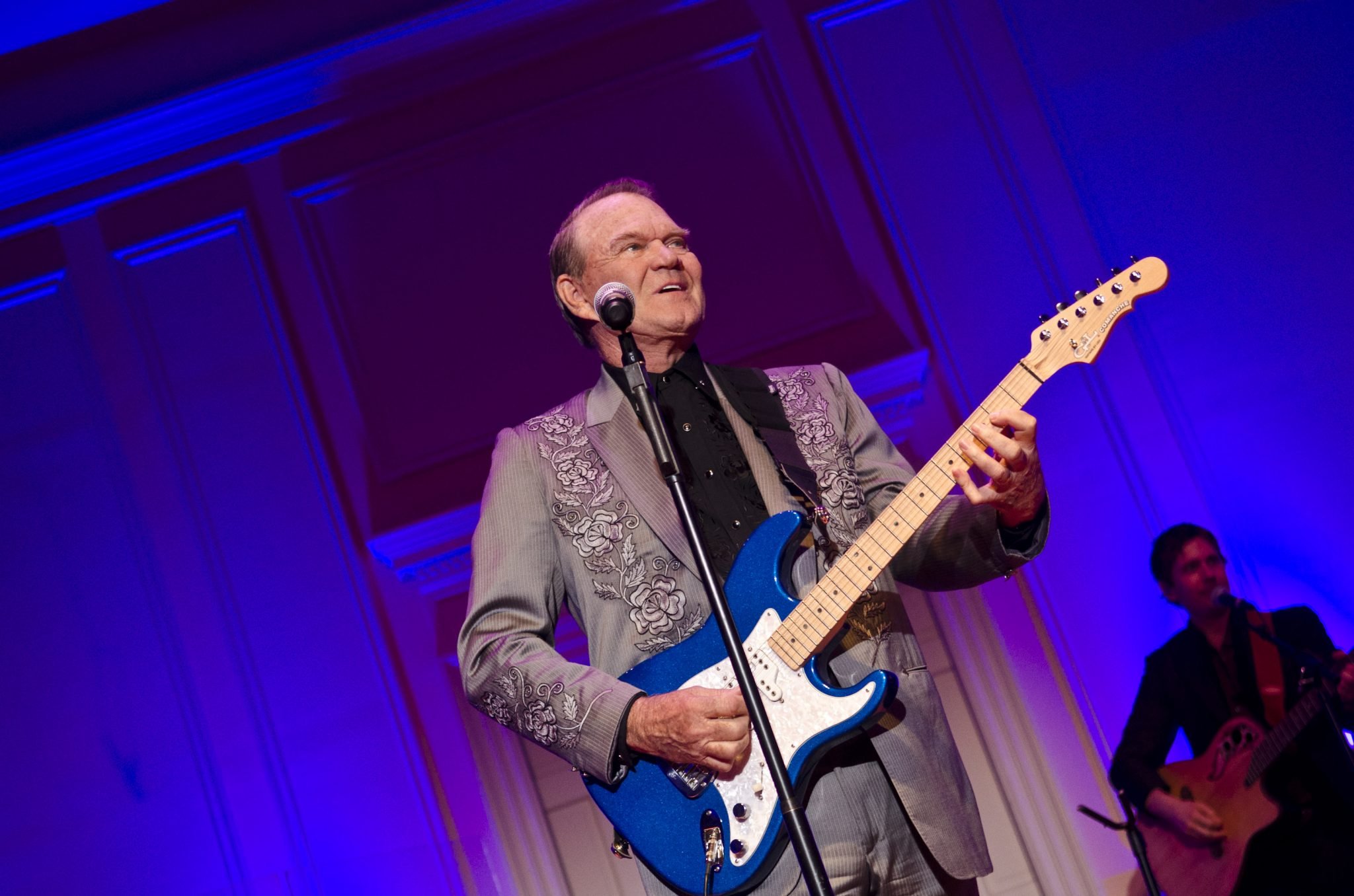 Glen Campbell, an iconic country musician, passed away yesterday (August 8). He’s famous for hits like “Rhinestone Cowboy,” “By the Time I Get to Phoenix,” and “I Wanna Live,” as well as his romantic escapades.

From his guitar-playing prowess to his meteoric rise in the ‘70s, Glen Campbell was one of the greatest stars in country music. Campbell passed away on Tuesday, August 8 after a long illness. He actively advocated Alzheimer’s education until his final days. To know more about Glen Campbell’s cause of death and his record-breaking success, take a look at our Glen Campbell wiki, right here.

Born in Arkansas, Glen Campbell was the seventh son of eight boys and four girls born to John Wesley and Carrie Dell Campbell. When he was young, Glen worked on the family farm with his sharecropper parents. He bought his first guitar from a Sears catalog for $5.00 and learned how to play it from his uncle Boo.

He displayed a natural talent for the guitar, which led him to perform professionally. Soon, he dropped out of high school to travel to Albuquerque, New Mexico, where he performed in his uncle’s band, as well as with Dick Bills and Sandia Mountain Boys. He worked on radio and TV until he formed his own band, the Western Wranglers. He performed in clubs, honing his talent and gaining more experience.

He soon moved to L.A. where he found a day job writing songs and recording demos at American Music. He became an in-demand sessions musician who performed with Nat King Cole, Frank Sinatra, Elvis Presley, Dean Martin, and many more. Soon, a professional singing career came calling. He signed with Capitol Records, but his initial songs didn’t find success.

With a string of unsuccessful songs, Capitol was considering dropping Campbell as an artist. But he teamed up with producer, Al De Lory to release “Burning Bridges,” which became a top 20 country hit. They collaborated again for “Gentle on My Mind,” which made Campbell a star overnight. He followed it with the even more successful, “By the Time I Get to Phoenix” and “I Wanna Live.” His first hits won him four Grammys.

There was no stopping Campbell with his later songs charting on Billboard and he even earned Oscar and Golden Globe nominations. From music, he went on to make a mark on TV with The Glen Campbell Goodtime Hour, which featured guests like The Beatles, Johnny Cash, Neil Diamond, and more. After the show was canceled, he continued to appear on other shows. He even performed for President Nixon in the White House, and Queen Elizabeth in London.

He later released his greatest hit, “Rhinestone Cowboy,” which became his largest-selling single with over two million copies sold. By the time he retired in 2010, he completed over 50 years in music with 70 albums recorded ─12 gold, four platinum, and one double-platinum album. At the time of his death, he had a net worth of $50.0 million.

When Campbell moved to Albuquerque, he met and fell in love with Diane Kirk. They married in 1955 when she was pregnant with their first child who unfortunately didn’t survive. She later gave birth to Campbell’s  child, Debby. Two years after Debby was born, the couple divorced, and in 1959, he married Billie Jean Nunley. Together, they went to Los Angeles for Campbell’s music career. Nunley gave birth to Kelli, Travis, and Kane before their divorce in 1976.

A few weeks after his divorce from Nunley was finalized, he married Sarah Barg, who was newly-divorced from Campbell’s friend and fellow musician, Mac Davis. Barg and Campbell’s son, Dillon was born three weeks before their divorce in 1980.

Though his career was at its peak, thanks to hits like “Rhinestone Cowboy,” Campbell’s personal life was a mess. He declined to go on tour and turned to drugs and alcohol. Around this time, he had a very public tumultuous relationship with Tanya Tucker, who was more than 20 years his junior.

Their relationship came to an end when he nearly suffered a drug overdose. He soon met Kimberley Woollen on a blind date and the attraction was instant. Woollen helped him overcome his drug addiction. They married in 1982 and have three children, Cal, Shannon and Ashley, who eventually joined their father’s touring band. Campbell and Woollen were together until his death.

How Did Glen Campbell Die?

In 2011, Campbell announced he was diagnosed with Alzheimer’s disease. Since then, he began a long process of retirement, cutting his tours short, performing at awards nights for the final time, and recording his final album, Adios. His health declined considerably, and by 2013, he was completely overrun by his illness. He and his wife sold their Malibu home and moved to Nashville where he was a patient at a long-term care facility.

For as long as he could, Glen Campbell and his family did their bit to raise awareness about Alzheimer’s. The documentary, Glen Campbell: I’ll Be Me showed how they coped with his deteriorating health and also featured an appearance from Bill Clinton.

As of 2016, it was reported that his disease was in its final stages. On August 8, 2017, Campbell’s family announced in a statement on his website that the singer has passed away. He was 81 years old. The official cause of death hasn’t been revealed but according to reports, he died of Alzheimer’s complications.

Campbell is survived by his wife Kim Woollen, his children (Cal, Shannon, Ashley, Debby, Kelli, Travis, Kane, and Dillon), his ten grandchildren, great-and great-great-grandchildren, his sisters (Barbara, Sandra, and Jane) and his brothers (John Wallace ‘Shorty’ and Gerald.) Instead of flowers, the family has asked for donations to be made to the Glen Campbell Memorial Fund.

It is with the heaviest of hearts that we announce the passing of our beloved husband, father, grandfather, and legendary singer and guitarist, Glen Travis Campbell, at the age of 81, following his long and courageous battle with Alzheimer’s disease. Glen is survived by his wife, Kim Campbell of Nashville, TN; their three children, Cal, Shannon and Ashley; his children from previous marriages, Debby, Kelli, Travis, Kane, and Dillon; ten grandchildren, great- and great-great-grandchildren; sisters Barbara, Sandra, and Jane; and brothers John Wallace “Shorty” and Gerald. In lieu of flowers, donations for Alzheimer’s research may be made to the Glen Campbell Memorial Fund at BrightFocus Foundation through the donation page at Careliving.org. A personal statement from Kim Campbell will follow. The family appreciates your prayers and respect for their privacy at this time.