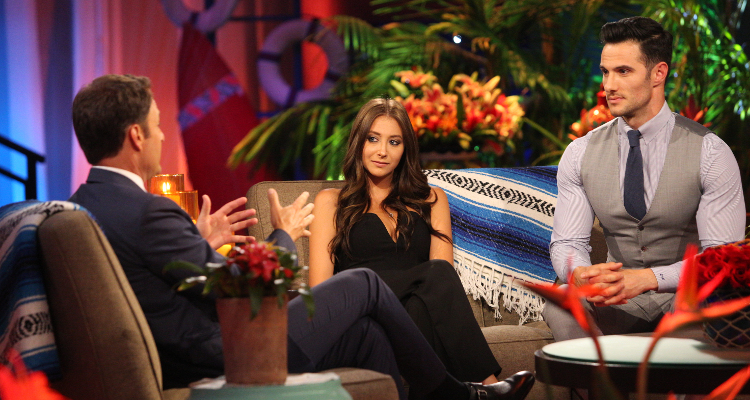 Bachelor in Paradise season 4 has wrapped up as one of the shortest seasons of the franchise. Some couples worked out while others were a train wreck waiting to happen. Lacey Mark and Daniel Maguire looked like they would work out. So, what happened between them in the BiP finale?

At the end of the Bachelor in Paradise season finale, we saw Derek and Taylor get engaged while Raven and Adam worked on their relationship. Dean ruined everything with Danielle and Kristina, and Amanda is so done with Robby after giving him so many chances.

Started on a Bad Note

Lacey will forever be known as the girl who arrived at the Bachelor mansion on a camel. Nick sent her home soon afterwards, but she left an impression on Bachelor Nation, which warranted a ticket to Paradise. However, when Lacey arrived at Sayulita, Mexico, she had no luck with the guys.

She was trying her luck with Iggy Rodriguez, who was more focussed on his bromance with Dean. But she couldn’t even finish her first drink in Paradise and had to leave when she was informed of her grandfather’s unfortunate passing. We feared she wouldn’t be back.

But the production-halting moment between Corinne and DeMario benefited Lacey the most. She gave her grandfather a proper farewell and returned to Paradise determined to make it work.

She still struggled to find someone she could connect with and was almost sent home during the Rose Ceremony. Then Daniel swooped in when three ladies needed roses to stay in Paradise. Lacey and a few of the other ladies were crushing on Daniel and his silly jokes.

After getting shrugged off by Jasmine and Christen, he gave Lacey his date card. Their lucha libre wrestling date was interesting, to say the least. They became pretty comfortable with each other for Daniel to discuss the advantages of having a sex tape with her. But the more we watched them, the more we felt that Lacey and Daniel weren’t going to work.

this relationship didn't have a prayer. a reminder that Daniel first identified Lacey as "scraps" when he first arrived. #BachelorInParadise

Cat’s Out of the Bag

With their Mexican vacation coming to a close, our castaways had three options: Work on a relationship after Paradise, go their separate ways, or do either after a Fantasy Suite date.

Lacey, who was totally invested in her relationship with Daniel, was all for the Fantasy Suite. Daniel started making jokes again, and she laughed a little too hard.

They spend the night together in the Fantasy Suite, and we assume it went well between them. Lacey and Daniel decided to pursue a relationship, and even made it official on social media once they left Paradise together.

Stop saying Daniel and Lacey are the new Evan and Carly. Daniel will say anything for that fantasy suite!! #BachelorInParadise pic.twitter.com/6BUd86pIAK

At the reunion special which was taped almost two months after filming in Mexico wrapped up, Chris Harrison sat down with the couples that made it to the end. Raven and Adam are progressing as normally as you would expect from a couple in this franchise, Amanda dumped Robby, and Derek proposed to Taylor.

As for Lacey and Daniel, things look frigid between them. Lacey actually admitted that their Fantasy Suite experience was a nightmare!

According to Lacey, when the cameras stopped rolling, Daniel confessed he had been lying about his feelings and was not really into her at all. He was pretty much putting on a performance for reality TV. Oh, the horror!

And Daniel, who suffers from foot-in-mouth syndrome, lies some more. He tries to make it sound that nothing of the sort happened and things are fine between them.

Then Chris Harrison plays video evidence that can rival Trump’s “locker room” talk. It was recorded the morning after the Fantasy Suite where Daniel tells a producer that “Lacey might like me a little bit more than I like her.” He continued, “I could never change my Facebook status to ‘in a relationship with Lacey,’” even though he told her he would.

After the second most-awkward moment of the night (the first being Dean’s triangular mess), Bachelor Nation was quick to point out that Daniel can’t love Lacey because Daniel loves Daniel. He recently appeared on Millionaire Matchmaker, so he’s clearly into himself.

Upon his arrival in Mexico, he didn’t have much luck with the ladies and settled for Lacey. He hooked up with the only woman who was interested in him and laughed at his dumb jokes. Basically, Daniel used her to ensure some screen time for himself.

So, Lacey and Daniel aren’t together. But after what Daniel did to her, he better watch out. Bachelor Nation is sharpening their claws.

Daniel, my brother you are less truthful than me. Do you still feel the same? #BachelorInParadise pic.twitter.com/cHdy6MDyk6