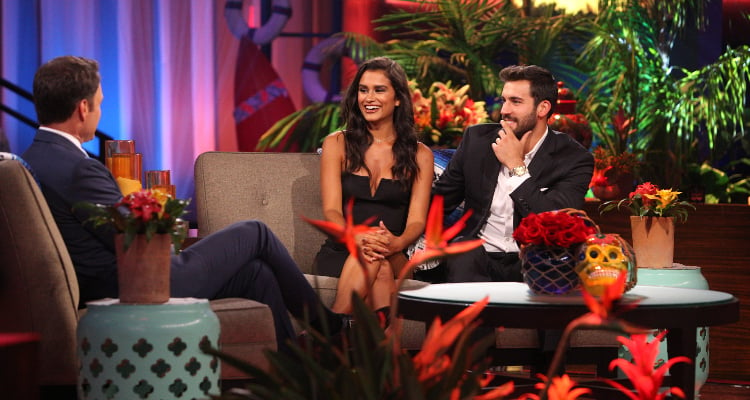 After what felt like the shortest season of Bachelor in Paradise ever, the head-spinning drama came to an end at the finale last night (September 11). Couples made up and broke up and things blew up. But let’s focus on the sweetest moment of the season, shall we? Derek Peth proposed to Taylor Nolan! Hurray! At least BiP worked out for someone! Bachelor Nation has their fingers crossed that these two will have a wedding special soon. But does that mean Taylor will move to Derek’s place in Iowa? Or will Derek relocate for Taylor? Where is Derek Peth’s hometown? Here’s what you need to know.

BiP season 4 came to a close and even though it was a pretty short season, it felt like months. To summarize the drama: we saw tortured two-timer Dean losing points with Bachelor Nation (he’s now known as the ultimate “F***Boy”), we saw Robby losing points with Amanda, Jack Stone’s weirdness, not enough Alexis, and the highly-hyped Corinne-DeMario scandal. Reality Steve predicted that this season would end with none of the couples working out, and it felt like it. At least we saw one engagement!

Peth and Nolan were attached by the hip and lips from day one in Paradise. Some of the castaways this season were rooting for this couple more than focusing on their own relationship. They kept in touch in the interim when production was halted, and continued where they left off in BiP round 2. They even sorted out their differences with remarkable maturity you rarely see in this franchise.

Also Read:“Bachelor in Paradise” Spoilers: Are Dean and Kristina Dating?

When Chris Harrison announced that the romantic vacationers have only one night left in Sayulita, Mexico, they had decisions to make. They could either part ways with their romantic partner, or leave with them to pursue their relationship after Paradise. Or they could take the keys to the Fantasy Suite and see where they stand the next morning.

Taylor was all for the Fantasy Suite, and explains oh-so-rationally how the physical aspect is necessary for a relationship to progress, and she won’t outline her feelings for him until they test out their bedroom compatibility. It’s “another piece of falling in love,” as she put it. And do you think Derek Peth is stupid enough to ignore this opportunity? He pretty much says that he’s hoping to wake up next to Taylor professing her love for him. Now that’s a confident man!

Needless to say, their Fantasy Suite date must have been very successful! They stayed together during the two months after Paradise ended and during the reunion special that was filmed on August 30, the two looked incredibly in love! Our eyes weren’t fooling us, and Derek got down on one knee and popped the question to Taylor who “lit a fire in [his] heart.” Awww! We don’t know if Taylor was unable to speak because she was overwhelmed by the surprise proposal or the blinded by the Neil Lane classic engagement ring! But she manages to nod a “yes” between sobs! We guess BiP worked out for this couple! Who doesn’t love a happy ending?

I love you, Tay

Where Is Derek Peth From?

The 30-year-old commercial banker has been all over the country since his return from Mexico. He is originally from the small town of Waverly in Iowa, but made the journey to Nashville to attend Evan and Carly’s wedding, and traveled to Chicago and California. Latest reports say that he works in Fort Lauderdale, Florida.

Also Read: Corinne Olympios from “Bachelor in Paradise:” Wiki & Everything You Need to Know

Taylor Nolan is a mental health counselor based in Seattle, Washington. Bachelor Nation is wondering if distance will come in the way of these two. But the newly-engaged couple is working hard to make their relationship work. Peth and Nolan sat down for an interview and spoke about their future plans.

Earlier, moving in together was not on the table for the couple at that time, but they agreed they would love to be in the same city, should they get engaged. Well, they’re engaged now! According to reports, Derek and Taylor are house-hunting in Los Angeles, New York, and Seattle! Judging from Nolan and Peth’s latest Instagram posts, they may have zeroed in on L.A.

Derek did say he’d go wherever love takes him. And it looks like it’s taking him to the City of Angels!