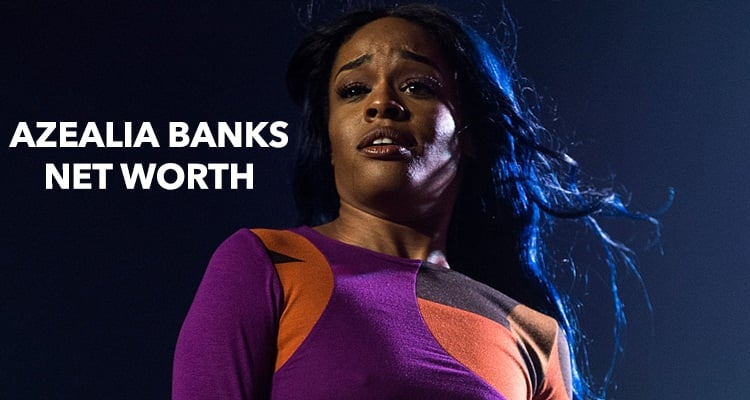 Azealia Banks is in the limelight again for all the wrong reasons. On Saturday night, she was in Russell Crowe’s Beverly Hills hotel suite. She had an argument with him and claims that Russell called her a n****r, choked her and spat at her. However, other guests present in his suite have something else to say about the situation.

For those of you who don’t know about Azealia Banks, then you should know that she is an American singer and a rapper.

Banks is famous not just for her songs, but also for the controversies that seem to surround her. Earlier, when Beyonce’s album, Lemonade was released, she was quick to state her opinions, criticizing it and claiming how the album was bad for all black women.

But she is not the first celebrity who did not like Beyonce’s album, Lemonade. Other celebrities who snubbed Bey’s album were Piers Morgan and Iggy Azalea. Now that you know a little bit about Banks and the controversies, let’s get to know a little bit more about her net worth, house, and endorsements.

How Rich Is Azealia Banks?

Azealia Bank’s Earnings According to Years Are given Below:

How Old Is Azealia Banks? Where Did She Grow up?

She was born as Azealia Amanda Banks on May 31, 1991 in Manhattan. She is 25 years-old and was raised by her mother in Harlem. Banks has two older sisters and her father passed away due to pancreatic cancer when she was just two years old. Banks claims that she had a difficult childhood, and in one of the interviews she states that after her father’s death, her mother became very violent and physically abusive. When Banks turned 14, she moved out of her mother’s house and moved in with her older sister.

From the time she was very young, Azealia was interested in musical theater and singing. At the age of 10, she performed in off-Broadway musicals with TADA! Youth Theater in Lower Manhattan. She tried her hand in acting by giving several auditions, but unfortunately, she had no success. That is when Banks decided to put an end to her pursuit for an acting career.

Banks started writing rap songs and decided to drop out of high school to follow her dreams of becoming a recording artist. In 2008, she made her first debut recording called “Gimme a Chance” and sent the tape to American DJ, Diplo.

When she was offered to sign a deal with XL Recordings, she used the name Miss Bank$. However, she left the recording company due to conflicting ideas later that year and she changed her artists name to her real name, Azealia Banks.

She then did some demo tracks while moving to Montreal. Her first single, titled “212” off her EP called 1991 became a chart-topping hit around Europe. Banks released her first mixtape, Fantasea in 2012.

In April 2014, Banks released her first studio album, Broke with Expensive Taste. Then, her second mixtape called Fantasea II: The Second Wave was released in July.

She has worked with several artists such as Kanye West and Scissor Sisters. Collaborations with these famous artists have certainly helped her to grow as an artist. However, she has also been in the limelight for engaging in famous feuds with celebrity blogger, Perez Hilton and rapper, T.I.

Even though she has only been in the music industry for a short time, her net worth is a whopping $3.0 million. She also has received attention because of her language (and profanity), which she uses in interviews and on social media sites like Twitter. Many times, she has used homophobic words to insult her critics, even though she is bisexual, and has received backlash from LGBT groups like GLAAD.

However, music industry insiders feel that her harsh words and cutting edge style is one of the reasons why she is able to sell more albums and gain more fans. Her latest album, Slay-Z was released in 2016.

Is Azealia Dating Somebody? Or Is She Single?

Banks is bisexual, however, in one interview she stated, “I’m not trying to be, like, the bisexual, lesbian rapper. I don’t live on other people’s terms.” Though she identifies as bisexual, she does not want to be defined by her sexuality in any way. She was never open about her relationship status or who she is dating. Last year there were rumors that Banks was dating Jesse Bradford. The pair did not confirm the news, but many sources did.

Azealia Banks is never shy to say what’s on her mind, and maybe this is one of the reasons why in such a short amount of time, she has earned so many followers. She is talented and her music speaks for itself.