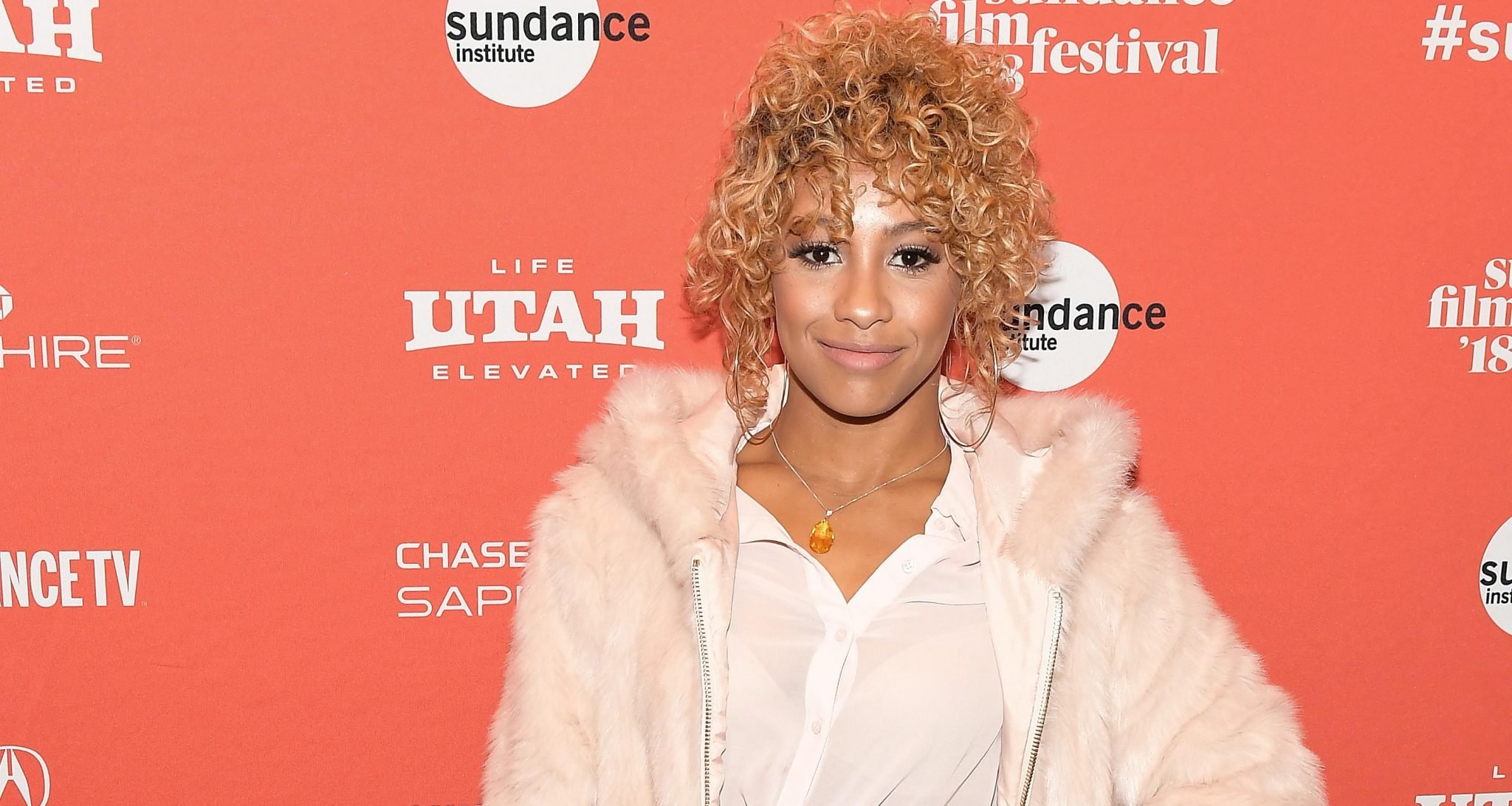 After Tiny filed for divorce from T.I. following his alleged infidelity, reports claimed that the couple was working things out. But a video that has surfaced online tells a different story, as it alleges T.I. was cheating on Tiny again. T.I. a.k.a. Tip is reportedly seen slapping the butt of a woman who is identified as Asia’h Epperson. Sound familiar? It’s not the first time she’s made headlines, as we’ll elaborate further, along with details from Asia’h Epperson’s wiki.

She Loves Her Father and Stepfather

Asia’h Sharrell Epperson was born on August 20, 1988, making her 29 years old. She hails from Joplin, Missouri and has mixed ethnicity through her biological parents.

Epperson grew up alongside her two brothers and had the love of two dads. She gushed about her dad and stepfather this Father’s Day and made no secret of how much she admires them.

Her father was a rather buff, strong man. She also had a close bond with her stepfather. Both her fathers are deceased.

Epperson also wished her brothers, Stratton and Donovan, a Happy Father’s Day. She appears to be an adoring aunt to her nieces and nephews.

Asia’h Epperson has multiple Facebook pages. She mentions she’s a widow in one of her old accounts.

She Was a Top 16 Finalist on American Idol

Epperson is a singer and songwriter. She auditioned for season 7 of American Idol in 2008 and showcased her talents on TV’s biggest stage for musicians. 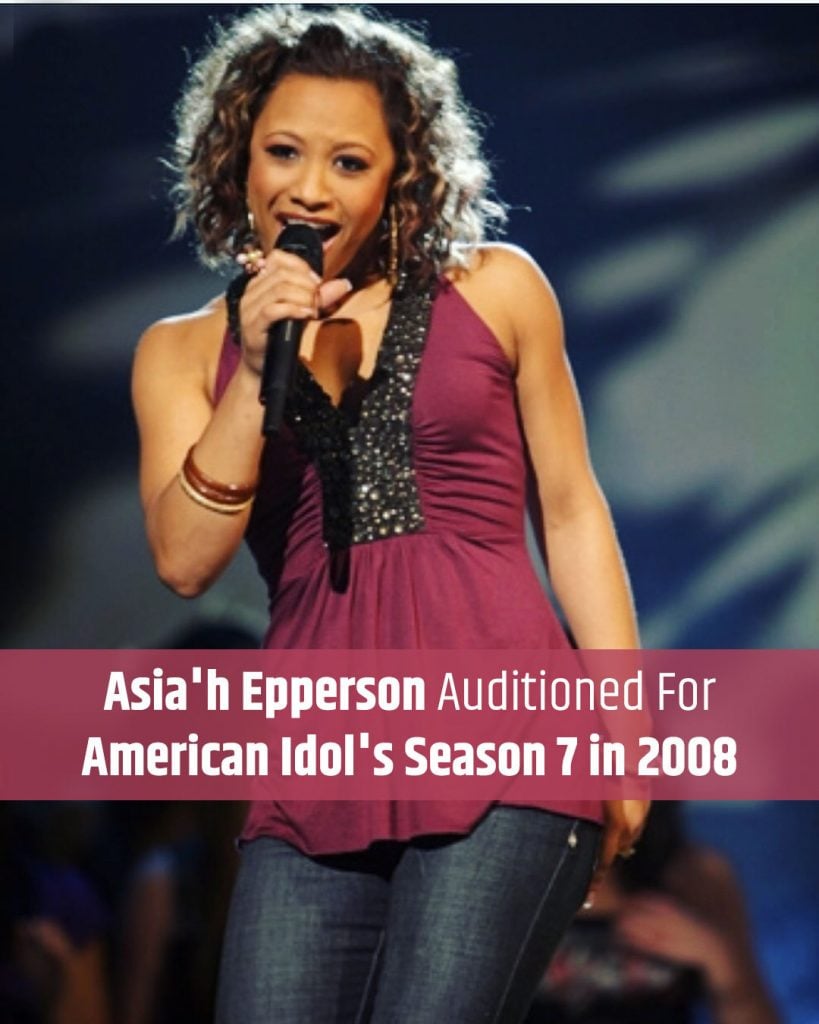 Two days before she auditioned for judges Simon Cowell, Paula Abdul, and Randy Jackson, Epperson’s father passed away in a car accident. She dedicated her audition performance of “How Do I Live” by LeAnn Rimes to her dad.

She made it to the Top 16 before she was eliminated, but her music career was far from over. Her song covers are a hit on YouTube, and she even signed a record deal with Island Def Jam.

She Is Famous for Her Role on Greenleaf

American Idol didn’t just boost Epperson’s music career, it also helped her venture into acting. She’s got an extensive resume of acting credits including a few roles in pilot episodes.

One of her biggest credits includes playing a groupie named Felicia in Straight Outta Compton. We see her character get kicked out of a room by the crew in the movie.

Epperson had a recurring role as Tasha Skanks on the OWN show, Greenleaf. She also had minor roles in shows like My Crazy Ex and Murder in the First.

Her talents also include dancing, gymnastics, cheerleading, poetry, and playing sports like basketball, baseball, and volleyball.

She Has a Legal History Involving Bathrooms

In addition to her stellar career achievements, Epperson has had a rather eventful public life. She’s had more than one run-in with the law, and they have been less than pleasant.

In one such incident, she was arrested and charged with misdemeanor battery in 2010. Epperson and the group she was with reportedly assaulted a woman in the bathroom of a Hollywood nightclub.

After the toilet rage episode, Epperson got into trouble again in 2018. You might recall the racial profiling and police brutality controversy at Houston’s eatery in Atlanta back in May.

Epperson, along with Erica Walker and Brittany Marie Lucio, was meeting friends at Houston’s. Although the kitchen was closed, the trio was allowed to use the bathroom after closing hours.

Restaurant staff asked them to leave the establishment several times. And when they allegedly refused, the staff called the cops on them.

An officer dragged Walker and Lucio out of the restaurant’s back door. Epperson followed while recording the events on her phone and later posted them on social media. The video also showed the officer accusing one of the women of assaulting him.

The ladies were reportedly injured during the arrest. They were also allegedly wrongfully arrested after the restaurant racially profiled them.

There are different versions of the events. But Epperson and her friends claim that they were painted as aggressors when it was the Atlanta PD officer who used excessive force.

In an attempt to boycott Houston’s, T.I. publicly slammed the restaurant and the police officer for manhandling Epperson and the other women.

And now hot on the heels of the Houston’s incident, Epperson is the star in yet another viral drama. This time, it allegedly involved the celeb who defended her, T.I., and his estranged wife, Tiny.

T.I. and Tiny separated when she served him divorce papers in December 2016. She was reportedly done with his infidelity when she found out about his multiple side chicks.

But soon after, there was talk that they were trying to make it work as a family and haven’t finalized their divorce. Tiny had squashed the reconciliation rumors by saying that they are seeing where their relationship goes.

And just when we thought that things were looking up for the hustlin’ king and queen duo of T.I. & Tiny: The Family Hustle, they took to Instagram to post their opposing views of marriage. And then a video surfaces with someone who looks like T.I. cuddling with Epperson.

In the video recorded backstage of a performance, Tip is caught smacking Epperson’s butt just as she sits on the couch beside him. The rapper is then cuddling her while someone is heard in the video saying, “That ain’t Tiny.”

#PressPlay: #TI spotted backstage last night at his show in Indiana by a fan who posted it on Snapchat ?

Since T.I.’s cheating video hit cyberspace, Tiny has been receiving love and support from social media users. The same can’t be said about the alleged stars of the video.

T.I. has yet to officially comment on the cheating scandal. And Epperson has turned off the comments on her Instagram page and made a statement in Instagram Stories.

“People always want to put a 10 on a 2 and make something out of nothing! Ain’t no body got time for that!” she said in the story adding that she has better things to do than reading comments from “strangers that know nothing about me. [sic]”

She then proceeded to elaborate that she’s making better use of her time reading the scripts from her three new shows. And she even shared snaps of her scripts.

Obviously, there’s no such thing as bad publicity for Asia’h Epperson.