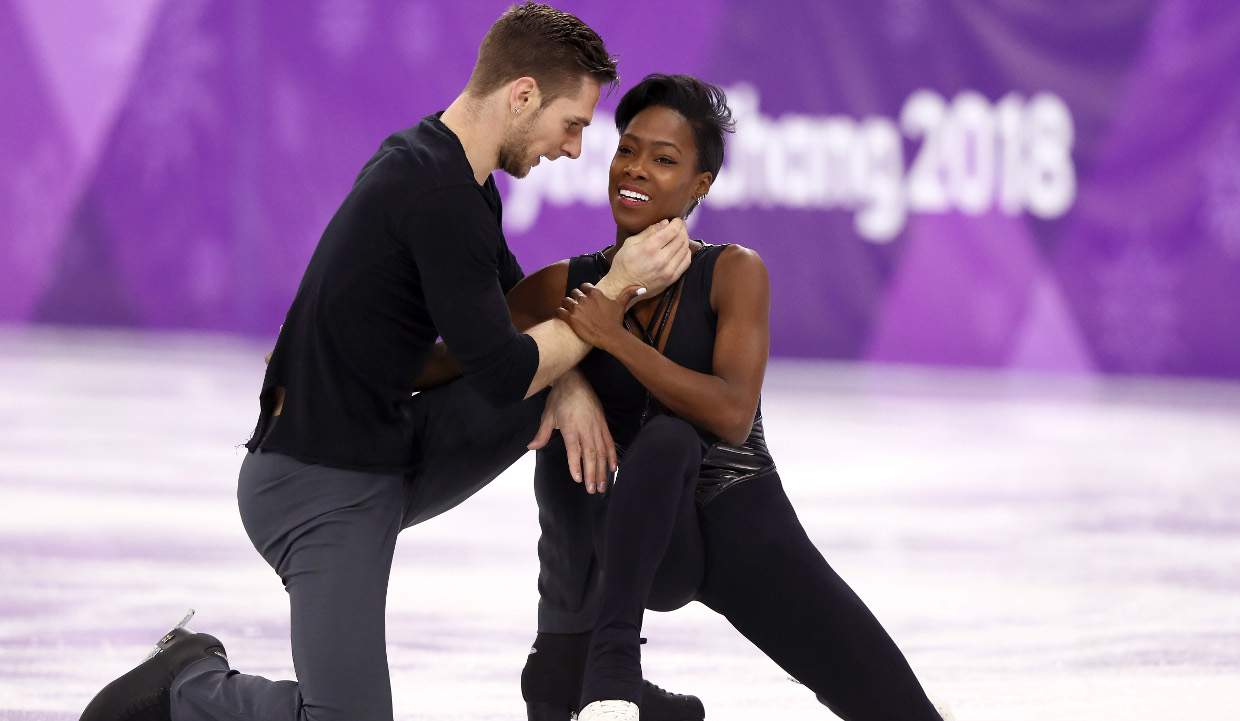 Pairs figure skating at the Winter Olympics 2018 has been in the spotlight for their amazing chemistry together. After their stunning performance on Valentine’s Day, all eyes are on French skaters Vanessa James and Morgan Ciprès. Their sizzling chemistry on the ice floor has got everyone wondering if their relationship is more than professional. Are Vanessa James and Morgan Ciprès married? Keep reading to find out!

In Pyeongchang, love was in the air on Valentine’s Day! From the Norwegian curling team’s pants with pink hearts to Team USA’s figure skating couple, Chris and Alexa Knierim’s loved-up performance, the day of love was celebrated in all its glory.

Vanessa James and Morgan Ciprès showcased their excellent chemistry in Wednesday’s performance. And the fact that they chose Ed Sheeran’s “Make It Rain” as their song to perform to has got social media buzzing!

Watching the two of them work together so effortlessly is making fans wonder about their relationship status. Are Vanessa James and Morgan Ciprès engaged or married? Or, are they just two beautiful dancers in perfect sync?

Get the scoop on the dynamic duo on ice, right here!

Vanessa James began skating when she was living in America with her family. She then moved to the United Kingdom, and later to France. The 30-year-old was previously paired with Yannick Bonheur for two years.

Morgan Ciprès, 26, was a singles skater before pairing with James. The couple paired up in 2010 and began to compete together. They made their debut in 2011.

James and Ciprès have gone on to compete in many figure skating competitions over the years and have won several medals together. More recently, the couple won a bronze medal at the 2017 European Figure Skating Championships in Ostrava, Czech Republic.

As for their relationship status, no reports are confirming if Ciprès and James are engaged or married. But it’s worth checking out their perfect chemistry on ice and what Twitter thinks of their performance!

Bringing Sexy Back on the Ice!

The couple not only have some incredible moves, but they are also pushing the limits when it comes to song choices!

In previous competitions, the two of them have skated to The Weeknd’s “Earned It,” a song also part of Fifty Shades of Grey. With outfits matching the movie’s theme, James and Ciprès delivered a stunning performance.

Their beautiful skating style was also on full display at a skating competition in 2017, where they performed to heavy metal band Disturbed’s version of the Simon & Garfunkel song, “The Sound of Silence.”

Also Read: 12 Couples at the Winter Olympics 2018 Who Captured Our Hearts with Their Moves and Love

James and Ciprès continued their streak of fiery figure skating performances at the 2018 Winter Olympics. They were one of the most memorable couples performing in the competition this year.

Their Valentine’s Day’s performance to Ed Sheeran’s “Make It Rain” may not have won them a medal, but the couple has won hearts on Twitter!

I've fallen in love with this French ice skating couple, James/Cipres. I can't take my eyes off of them when they skate. They might not be the best technically, but they definitely have the best taste. WHY DO I LOVE THE #OLYMPICS SO MUCH?!?!?

Anyone skating to one of my favorite @edsheeran songs is my pick to win. #Olympics #Olympics2018

I approve of this skating couple using Ed Sheeran’s “Make It Rain” as their song to perform to. #Olympics

5th at 2018 Olympic game … so proud of us . Thank you everyone for your support your faith your passion and your cheers for us . We love you . Thank you our coaches our Familly and our federation . ❤??