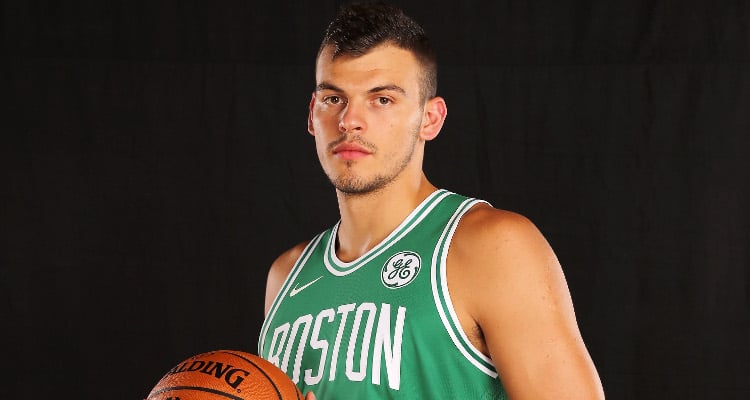 What do Ante Zizic and Kyrie Irving have in common? Zizic was traded to the Cleveland Cavaliers in exchange for Kyrie Irving! How does Ante Zizic play a part in the Kyrie Irving trade? We’ve got all the details you need to know, right here!

Ante Zizic entered the NBA relatively unknown. Before he could suit up for his season in the NBA, he was traded to the Cleveland Cavaliers yesterday (August 22) by the Boston Celtics. He was part of a four-player deal for the Kyrie Irving trade. If you’re one of those wondering who Ante Zizic is, you’re not alone. After the trade, many are curious to learn more about this unknown player. Here’s everything you need to know about the young player in our Ante Zizic wiki.

Ante Toni Zizic was born in the Croatian city of Split, where he played basketball. His first team was the KK Split (a team within the Croatian Premier League) during the 2013-14 season. He played three games on the junior team before playing five games for the KK Cedevita team of Zagreb.

In Croatia, he played for Team Gorica, as well as the national team in the U-16, U-18 and U-19 FIBA Championships. Then, he joined Cibona Zagreb, a professional basketball club in the Adriatic League. During that season, he played 25 games, and had an average of 7.4 points, 0.3 assists, 0.3 steals, and 0.9 blocks in 15.5 minutes per game. With a breakout 2015-16 season, he was named a top prospect in the Adriatic League. He was also named to the Starting Five team of the European-wide FIBA Europe Cup. He has bronze and silver medals from his last two FIBA Championships.

#2. His Drafting was Controversial

The 20-year-old was selected by the Boston Celtics in the 2016 NBA Draft. He was the 23rd overall pick, but his selection was not welcomed by Celtics fans. Followers of NBA didn’t know who this young European was and they actually booed him during the selection process!

But Fran Fraschilla, an ESPN correspondent who covers basketball internationally, claimed that he’s a player to be reckoned with. “[Zizic] is one of my favorite kids in this draft,” he said. “He’s 6-11, 240. He has a mean streak.” The Adriatic League is one of the 10 best leagues in the world and being a part of it is no small feat. The young Zizic stepped up a level when he joined the Darussafaka Dogus in the Turkish League.

Now, with a wingspan that’s an inch more than his 7′ tall frame, the center has been gaining attention within the NBA. Dave Blatt was eager to see him in the NBA when he was the Cavaliers’ coach. Blatt is now coaching Darussafaka Dogus and knows Zizic’s potential. He barely had the chance to show his skills in the NBA, but Zizic has earned the moniker “Baby Shaq” in Europe, and is considered at the level of former Adriatic League players-turned-NBA players, Nikola Pekovic, Nikola Jokic, and Jusuf Nurkic.

#3. He Followed His Brother on the Court

Ante has a brother, Andrija Zizic, who is 17 years older than him. By the time Ante was born, Andrija was already a professional basketball player. He played for Cibona Zagreb among other teams in the Croatian League, the Adriatic League, and the Greek League. He also has silver and bronze medals playing in the FIBA Championships years before his brother would repeat history.

Ante grew up watching his brother play and that was all he wanted to do, too. “He was my role model. I only wanted to be like him,” he said. The 37-year-old is now retired, but hasn’t left basketball. He is now the sporting director for Cibona Zagreb.

#4. He Joined the Cleveland Cavaliers

Zizic signed with the Celtics on July 1, 2017 to play the next season. But that won’t be happening. Instead, Zizic will start his first NBA season playing for the Cleveland Cavaliers! Cleveland acquired Zizic, Isaiah Thomas, Jae Crowder, and the Nets’ unprotected 2018 first-round pick in exchange for trading Kyrie Irving to the Celtics.

His favorite coach, Blatt, isn’t with the Cavaliers anymore, but Zizic is finally set to make Blatt proud. His salary hasn’t been disclosed but he’s said to be a new asset to the Cavaliers. According to analysts, LeBron James might not play for the Cavaliers next season. So, the team may have hit the jackpot with Isaiah Thomas on the roster, while also grooming the rough-around-the-edges Zizic to be the most promising player in the league.