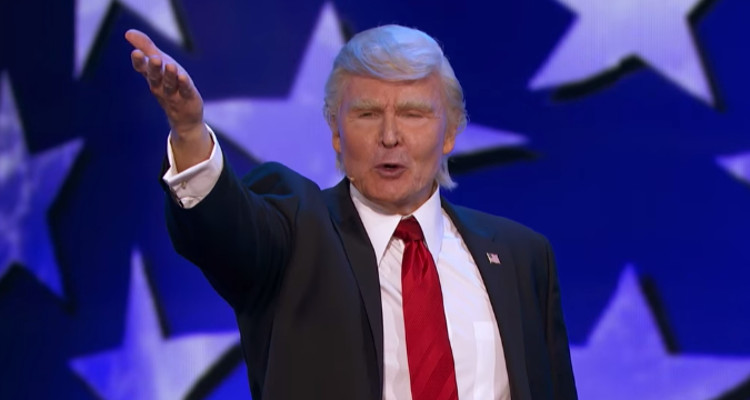 Jeff Trachta has made a career (and a lot of money) by impersonating famous people and making audiences collapse with laughter. Now he has taken on a really big challenge: Being the singing Donald Trump on America’s Got Talent 2017. His audition and Judge Cut performances have been terrific, and the audience is rooting for him every step of the way.

America’s Got Talent’s Donald Trump impersonator continued to bring down the house with his hilarious act. The “singing Trump” first blew everyone, including three of the judges, away with his impersonation and then belted out a medley of Backstreet Boys songs as he danced on stage to the cheers and applause of the audience and judges. Who is Donald Trump on America’s Got Talent? It’s none other than Jeff Trachta who is having a ball with his Donald Trump impression and making audiences hysterical with laughter. Trachta is an actor, recording artist, comedian, and Las Vegas headliner. We will tell you everything we know about Jeff Trachta’s wiki right here.

Born on October 6, 1960, in Staten Island, New York, Jeff Trachta’s age is 56. He is the son of a Sears television salesman and, always finding something funny in everything, has often remarked: “Dad sold TVs for a living but never lived long enough to see me on one.” Trachta’s parents were against him going into show business as a career, but he felt impelled to do so. His big break came when he was chosen to play Thorne Forrester on the CBS soap opera The Bold and the Beautiful for eight years. While on the show, he also released three music albums based on the series, which became popular in Europe.

Trachta made his Broadway debut by playing Danny Zuko in the musical Grease. He discovered his talent for acting, impersonations, singing, and keeping the audience in splits. He acted in plays like Agency, Three Guys Naked from the Waist Down, The Phantom of the Opera, Cinderella, The Little Shop of Horrors, and The Education of Randy Newman. Trachta has also had roles in some films, namely Interlocked, Poison, Night Eyes 4: Fatal Passion, and Do it Up. He continued to appear on TV in shows like VIP, Here Come the Munsters, Strip Mall, Loving, and One Life to Live.

Hitting it out of the Park

Right now, Trachta is where the action is: On America’s Got Talent. And boy is he rocking it1 His Donald Trump mannerisms may have turned off judge Mel B. during his audition, but she was the first one to stand up and applaud after he did his Backstreet Boys medley. There are a lot of Donald Trump impersonations out there, but Trachta is surely one of the best and funniest. So tune into America’s Got Talent to catch Jeff Trachta’s act!