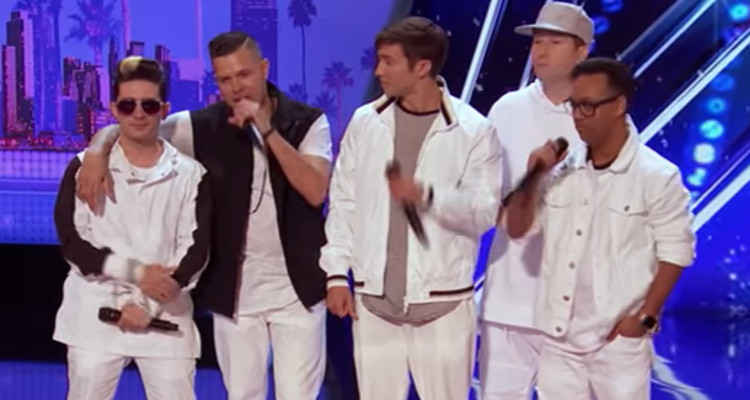 July 11 will be the last episode of auditions on America’s Got Talent. Starting next week, the Judge Cuts will begin, which will lead into the Quarterfinals in August. This will be the last chance to see all the potential talent this year, and get one step closer to finding out who will win this season.

The group is from Miami, Florida and their band’s name is 5 Alive. Each of the five members have been best friends since childhood. Two of them are cousins, one works for a private limo company, and another one is best friends with the sister of his bandmate. Each of their ages range between 18 and 20.

5 Alive on America’s Got Talent

When Simon asked the guys about their dream, one said, “With everything going on in the world today, I think what America really needs is a boy band.” Before starting heir performance, judge Heidi Klum said that she hoped they were good.

The band sang and performed a choreographed dance to their cover of Bel Biv Devoe’s “Poison” and Ginuwine’s “Pony.” One judge who seemed to have really enjoyed their performance was none other than Mel B. In the middle of their performance, she screamed, “They are like the Backstreet Boys.” She eventually jumped to her feet and applauded for the band. Even Heidi Klum and Howie Mandel seemed to be into the boy band’s performance. But not all of the judges were impressed because Simon Cowell looked bored.

Also Read: Johnny Manuel on “America’s Got Talent:” Singing Whitney Houston’s, “I Have Nothing.”

Because it was only a sneak peak, we will not know if 5 Alive make it to the next round, until later tonight when America’s Got Talent airs. To see if the boy band makes it past the audition rounds, make sure to watch America’s Got Talent at 8:00 p.m. EST on NBC. Take a look at what you can expect below: