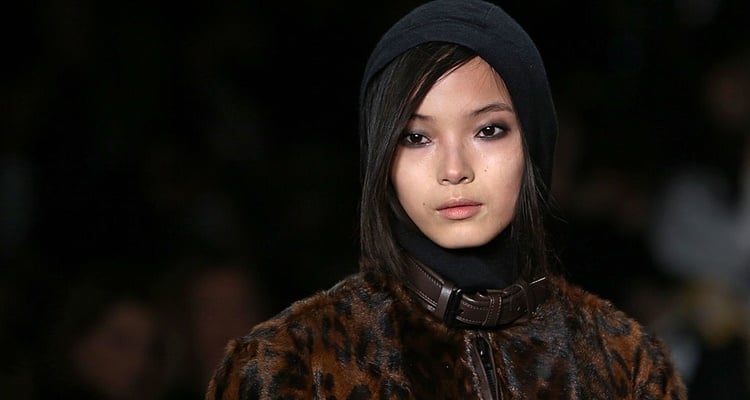 Very few knew about Xiao Wen Ju when she first started. Now she’s making a name for herself as one of the few top ranked Chinese supermodels in the world!

Xiao Wen Ju is a Chinese supermodel who will walk in the Victoria’s Secret Fashion Show 2016! She has graced the covers of major magazines, and is one of the most successful Asian models of her generation. Victoria’s Secret will be Xiao Wen Ju’s biggest global stage in her fashion career to date, so many want to know more about this up-and-coming model. For that, we’ve compiled all facts known about her in Xiao Wen Ju’s wiki, and we’re sharing it with you.

What is Xiao Wen Ju’s Net Worth?

Xiao Wen Ju’s career has definitely picked up in the past two years, and she’s been gaining recognition in the global high fashion scene. Currently, her net worth is estimated to be $500,000, but it’s expected to spike now that she was chosen to walk as a Victoria’s Secret Angel for the big show. Being associated with Victoria’s Secret is sure to open up new avenues for Ju.

Ju’s big break came when she was signed for a Marc Jacob’s ad campaign in 2012. She was the first Chinese model to head a Marc Jacob campaign in the brand’s 25-year long history. Since becoming the face of Marc Jacobs, Ju’s career picked up and she went on to walk for Louis Vuitton, Christian Dior, Adidas, Dior, Kenzo, Lane Crawford, and Sephora, as well as Coach, DKNY, Samsung, and the Chanel Chance fragrance.

She was Discovered While Running Errands

Xiao Wen Ju was born in the city of Xi’an in the Shaanxi province of China. According to her profile on the IMG Models web site, she was discovered when she was running errands in her hometown. The 27-year-old’s modeling career was launched in 2010, when she signed with IMG Models. She’s signed with the London, Milan, Sydney, New York, and Paris agencies of IMG, Style International Management in Hong Kong, and Bravo Models in Tokyo.

She first caught the fashion world’s eye when she appeared on the cover of Harper’s Bazaar China in May 2010, which centered around Chinese models. She made her runway debut in New York City at the Fall Honor Show. In 2011, she walked for major labels like Shiatzy Chen, 3.1 Phillip Lim, Calvin Klein Jeans, DKNY, Emanuel Ungaro, Hermès, Louis Vuitton, Prada, Rochas, and Thierry Mugler. That same year, she appeared alongside top Chinese models Ming Xi and Shu Pei, in Lane Crawford’s fall/winter campaign.

By 2012, her popularity rose, and aside from being the first Chinese model as the face of Marc Jacobs, she walked for other big labels and was even featured on the cover of Vogue China and Numero China, twice. Her only blunder to date was while walking down the 2012/2013 Tibi FW11 fashion show, Ju mistakenly walked down the wrong direction on the runway. What would be mortifying to most didn’t seem to phase Ju, and she handled the situation with grace.

Ju’s IMG Models profile states that she’s five-foot-nine, and weighs around 121 pounds. You’ll be surprised to know that Ju has no specific diet for her slim build. She eats whatever she likes whenever she likes. “If I want to eat something, I just go eat it. If I want French fries, I eat French fries—it makes me happy,” she told Vogue. Ju does have a long beauty regimen though, with specific eye-lash curlers, lip care products, moisturizers, and hair maintenance. Her fitness regime includes short and long-distance running.

Ju’s known for her ideal body to model street-style fashion. She takes it to another level with her upright and regal posture, making many believe that she’s had ballet training. She credits her mother for her perfectly straight posture. To this day, Ju’s mother tells her to sit “like a [grandfather] clock and stand like a tree.”

She Lives in New York

Not much is known about Xiao Wen Ju’s family, aside from the fact that she visits them in China once or twice a year. Despite her busy schedule, she says that her favorite thing to do is spend quality time with her family and her “future husband.” As she is currently single, there are many theories of what she meant by “future husband.” Some reports state that she has a child, but as of now, not much is known about her personal life.

Xiao Wen Ju enjoys swimming, listening to music while getting her hair and makeup done, and watching films. Her favorite movie is The Dark Side of The Sun. One of her best pastimes (and her self-proclaimed assets) is the fact that she can fall asleep no matter where she is. It must come handy with her jet-setting lifestyle! She’s also a big selfie enthusiast, posting backstage pictures of her shows on Instagram, where she’s followed by more than 200,000 people.

She’s also actively involved in New York Cares, an organization whose goal is equal educational opportunities for children and adults, and she assists in neighborhood beautification projects.