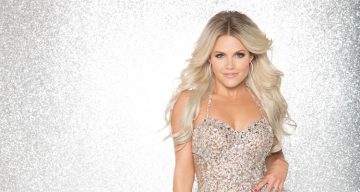 Never having missed a season of Dancing with the Stars in the last four years, the stage is Witney Carson’s second home. This year, she is paired with actor, writer, and race car driver, Frankie Muniz. We can’t wait to watch them, can you?

Witney Carson joined Dancing with the Stars in 2013 as a troupe dancer. She quickly climbed the ladder and in season 18, she was promoted to a professional partner on the show. In season 19, she and her partner Alfonso Ribeiro took home the trophy. Since then, Witney has been a hot favorite! This year, in season 25, she is paired with actor Frankie Muniz. So far for Witney Carson, Dancing with the Stars has been an incredible platform and we’ve seen her get better each season. Here are a few interesting facts about her in our Witney Carson wiki.

Born in American Fork, Utah to Tyler and Jill Carson, Witney Carson is the oldest of four children. She has a sister, Camry and two brothers, Jaxon and Cade. Her love for dancing was evident to her parents and at the meager age of three, she was trained in different dance styles, including ballet, hip-hop, jazz, ballroom, and tap. Carson auditioned for the season nine of Fox network’s So You Think You Can Dance and she made it through to the top twenty finalists. Initially, her partner was ballet dancer (and eventual season winner), Chehon Wespi-Tschopp. Later, when only ten dancers remained, the contestants began to switch partners each week. Witney was partnered with Nick Lazzarini, Stephen “Twitch” Boss and finally Marko Germar, before she was eliminated after the week-seven round. She returned in season ten, partnering with top six dancer Paul Karmiyan and season winner, Du-shaunt “Fik-shun” Stegall.

How Old is Witney Carson?

Currently, in season 25 of Dancing with the Stars, she is paired with Frankie Muniz. As we all know, Frankie is an actor, writer, musician, and race car driver. He’s multi-talented and has found a partner in Witney Carson, who is just as talented in the field of dance. We’re certain that this duo will put up some jaw-dropping performances.

On October 3, 2015, Witney Carson’s Instagram confirmed her engagement to her boyfriend, Carson McAllister. On January 1, 2016, the couple got married in a private Mormon ceremony at the Salt Lake temple in Salt Lake City. Among her bridesmaids were fellow Dancing with the Stars dancers Jenna Johnson, Brittany Cherry, and Emma Slater, with Lindsay Arnold serving as her maid of honor.

Missing this one rn @carson.mcallister

Witney Carson’s net worth is estimated at $300k. She has appeared on Dancing with the Stars from 2013-2017 and has acquired quite a fans base from the show alone, not to mention her name was already garnering attention from her time on So, You Think You Can Dance.

Witney Carson’s DWTS performances have always managed to have audiences glued to their seats. We aren’t expecting any less of her this time around in season 25. This lovely young lady, along with her charismatic partner Frankie Muniz, is about to set the stage on fire!