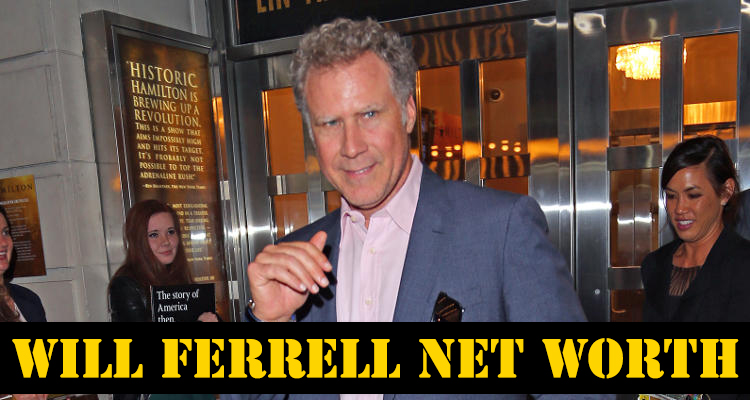 One of the funniest men in Hollywood turns 49 this month. Will Ferrell’s birthday is on July 16, and all of Hollywood is at hand to wish him. Why? That is because Will Ferrell’s movies constantly keep the audience in stitches and sets the box office counters ringing. He himself is laughing all the way to the bank and making producers line up outside his door.

The lucky woman who gets to share all this good fortune is Will Ferrell’s wife Viveca Paulin, whom he married in 2000. Just goes to show that in Hollywood comedy is serious business.

Ferrell hasn’t just been tickling the audience since he started out on Saturday Night Live. He has been a funny guy ever since he was a kid. Growing up in Irvine, California, wasn’t all fun and games for Ferrell. His parents divorced when he was eight years old, thereby unsettling the placid suburban life he was living. Ever the optimist, Ferrell escaped boredom by making fun of himself and making his school mates laugh. He would pretend to trip or smash his head into a wall while his friends laughed uncontrollably.

The Lives of Others

All this would serve him well when he auditioned for the hit TV show, Saturday Night Live, in 1995. Ferrell soon made a name for himself by creating a colorful gallery of characters on the show. He became wildly popular for making people double up with laughter with his acting. Some of the characters he portrayed were U.S. President George W. Bush, senator Ted Kennedy, U.S. Attorney General Janet Reno, fictitious private detective Shaft, Iraqi president Saddam Hussein, bomber Ted Kaczynski, and Cuban president Fidel Castro.

While getting dollars and laughs for his SNL performances, Ferrell got noticed by Hollywood. He soon started appearing in movies such as Austin Powers: International Man of Mystery, Dick, The Ladies Man, Jay and Silent Bob Strike Back, and Zoolander. His breakthrough role came in 2003 in the movie Old School, in which Ferrell was simply hilarious. The New York Times said that “the film belongs to Mr. Ferrell.” From then on, there was simply no looking back for Ferrell as he appeared in big Hollywood productions. Ferrell’s acting career is full of hits such as Anchorman: The Legend of Ron Burgundy, Stranger Than Fiction, Starsky & Hutch, and Talladega Nights: The Ballad of Ricky Bobby.

Ferrell didn’t totally abandon TV shows after he made it big in Hollywood. He has hosted SNL twice. Of late, he has appeared in movies such as Get Hard, Daddy’s Home, and the wacky Zoolander 2. Such is his popularity that the Internet is brimming with Will Ferrell memes. They are vulgar, obscene, crazy, and incredibly funny.

Ferrell endorses several brands, like Chrysler, both in ad campaigns and in his movies. So how rich is Will Ferrell? Rich enough to have two homes. One house in New York, which has been featured in Architectural Digest for its sleekness and elegant design. It was once a printing shop before Ferrell turned it into a piece of hot real estate. Ferrell lives in this 2,600 square foot home along with his art auctioneer wife and their two sons. The other house is on the West Coast in Los Angeles. Ferrell bought this huge home in 2006 for a cool $9.9 million. The house is over 4,000 square feet, set on two acres of land with a swimming pool and a yard. The house is well-designed and gives Will Ferrell’s family a lot of space, which is required given Will Ferrell’s height. Will Ferrell’s kids love their 6’3” dad, and he can’t live without them.

Ferrell has several cars and is known to be an enthusiastic driver. He is often seen zipping around in his Nissan Leaf. Despite all his wealth, Ferrell remains a humble guy. He stays away from controversies and, despite his gift of the gab, doesn’t end up blurting out the wrong thing. Ferrell is happiest when he is making audiences happy. He is now producing TV shows of his own like Eastbound & Down and The Chris Gethard Show. In the age of spectacular special effects movies, Ferrell has managed to carve out a big space for his kind of comedy. Ferrell connects with audiences because of his humane nature and the ability to always see the silver lining. Ferrell brings on the fun at the movies.