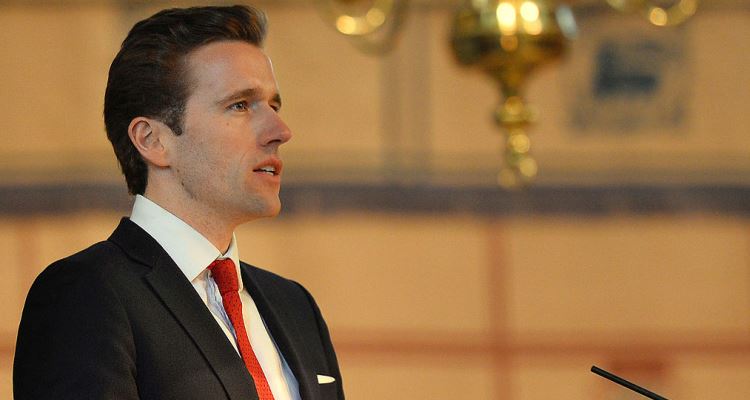 Have you heard of Wilfred Frost? Don’t feel bad if you haven’t —not many have, unless you’re a fan of his show, Worldwide Exchange. Fun fact: He’s also David Frost’s son! If you don’t know who that is either, then don’t worry, because we’ve got you covered. There was a special anniversary for Wilfred’s father a couple weeks ago and it involves a scandal! If you want to know more, read on because we’ve got all the details right here in our Wilfred Frost wiki.

Who is Wilfred Frost?

Wilfred “Wilf” Frost was born on August 7, 1985 in England and is one of three sons (Miles, Wilfred and George) born to Lady Carina Fitzalan-Howard and David Frost. Wilfred graduated from the University of Oxford in 2008 with a degree in Philosophy, Politics and Economics and later studied finance for five years.

Wilfred’s childhood dream was to be James Bond (like his favorite Bond actor, Sean Connery), but he soon realized that his hero was really his father, British journalist David Frost, who interviewed disgraced former president Nixon on May 4, 1997, after the Watergate scandal. It was one of the most watched political interviews for years, with over 45 million people watching.

“My desire to move into this world stemmed from seeing my father do it so happily for all of my life, although it took me until my mid-20s to find the confidence to explore and ultimately pursue the only real dream I ever had – to follow in the footsteps of my Dad, David Frost,” said Wilfred on his website profile.

He Survived His Father and Brother

Sadly, Wilfred’s father was not able to see his son follow in his footsteps. In August 2013, he suffered a fatal heart attack while aboard a cruise ship called the Queen Elizabeth, where he was previously booked to deliver a lecture. His grief grew as Wilfred lost his older brother, Miles, two years later, who fell after a run. Both Miles and David’s deaths were caused by an inheritable heart disease called hypertrophic cardiomyopathy.

Lovely day in central London. Highlight being going to say a prayer at Dad's memorial stone in Westminster Abbey.

He Started a Foundation with His Brother

After the deaths of his father and brother, Wilfred and his younger (and now only) brother, George, were tested for the heart condition that was responsible for David and Miles’ death. It turns out, they do not have the condition, but they co-founded the Miles Frost Fund, which raises money to test for families who might have the same condition.

While there’s no sign of Wilfred Frost’s net worth, we at least know that he’s making enough to afford to live in New York City, while his show films in New Jersey, just across the Hudson. He joined CNBC London in 2011 and started working in the U.S. last year. It’s impressive (considering Wilfred Frost’s age), that he’s spoken with some of the most famous political figures in the world, including Margaret Thatcher, David Cameron, Tony Blair and George H.W. Bush.

You can search Wilfred Frost’s Instagram all you want, but you won’t find the love of his life. Standing at 6’5″, the 31-year-old is still single but finds that New York is the perfect place to be single. Also: Like the rest of his family, he’s an Arsenal fan!