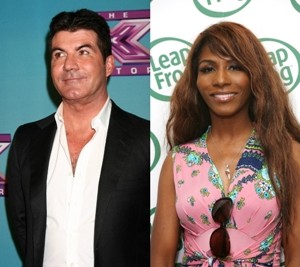 It was surprising for a lot of us to hear that, at the age of 53, Simon Cowell was expecting his first child, and with his younger mistress, Lauren Silverman, nonetheless. But there’s one woman who is said to be taking the baby news extra hard: Cowell’s ex-girlfriend, Sinitta.

Sinitta and Cowell dated on and off for years, and rumors have been swirling for the past couple weeks that she was once pregnant with his baby, but had an abortion because she knew that he didn’t want kids. In an attempt to set the record straight, Sinitta recently took to Twitter, where she posted a series of emotional and cryptic posts about the abortion rumors. Although she didn’t admit to getting rid of Cowell’s baby, she didn’t exactly deny it. “Firstly the baby termination wasn’t in 2009 @janemooresun, don’t worry about my ability to remember correctly, its something I’ll never forget [sic],” she wrote.

Sinitta also hinted that she plans on revealing the truth about terminating the pregnancy. “this isn’t the best place (practically) as SO much to say, im going to set a few things straight even though I am afraid of the consequences [sic],” she wrote, followed by, “I need to pray on this, I need to sleep on this, but I know somehow I need to do this, I’m sorry, but its important to me [sic].”

According to a few insiders, Sinitta was reportedly distraught after finding out that Cowell was expecting a baby with another woman because she always thought that if he ever settled down to have kids and start a family, it would have been with her. “This isn’t the way Sinitta saw it happening in her head. The news has knocked her completely and she hasn’t been in a good way since she found out,” claimed one source. “Simon always told her he didn’t want children.” Sinitta’s friends and family are said to be worried about her, and believe she may be on the verge of a “breakdown.”

Cowell is known for staying friends with his old flames—his ex, Mezhgan Hussainy, is still his makeup artist for The X Factor. He’s also maintained a friendly relationship with Sinitta over the years, which Silverman is now reportedly putting a stop to. A source is claiming that Silverman is demanding that Cowell keep his distance from Sinitta, and that he’s “going to back the mother of his baby.”

What do you think: Would you be OK with your boyfriend being friends with his ex?