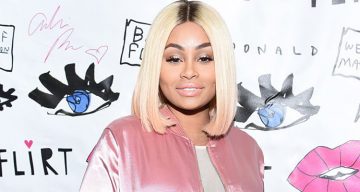 After a recent baby announcement and an engagement, entrepreneur and model Blac Chyna appears to have filed legal documents to take on the Kardashian name. What is the new name of Black Chyna? Well, if all checks out, Blac Chyna’s real name, which is currently Angela Renée White, will be Angela Renée Kardashian!

Why Is Blanc Chyna Changing Her Name?

You’re probably asking yourself, “Why is Blac Chyna Changing Her Name?” Well, according to an article by the Daily Mail, Blac Chyna wants to change her name to start making money off the Kardashian name. She plans to use her new name to increase her value and marketability as a “social media celebrity” in addition to offering entertainment services, guest appearances, and party hosting services.

Chyna and fiancé Rob Kardashain are rumored to already be getting six-figure offers for a reality TV series, so why not start cashing in now?

Blac Chyna certainly has the entrepreneurial spirit and the celebrity presence already, even without the Kardashian name. The 27-year-old launched her own makeup and lash brand, Lashed by Blac Chyna, in 2014, with her first Lashed Bar opening in California the same year. The brand specializes in false lashes and extensions.

Finally, Blac Chyna has made a name for herself in the hip hop and urban modeling worlds, appearing on the cover of several well-known magazines and being featured in a slew of music videos, including Nicki Minaj’s “Come on a Cone.”

Is Blac Chyna Soon to Be a Kardashian?

Of course, Blac Chyna and Rob Kardashian are engaged to be wed with plans to tie the knot in a warm clime sometime by the end of this summer. The announcement came in early April, just three months after the two had officially started dating.

The couple also recently announced that they’re expecting with Blac Chyna proudly showing off her baby bump on Snapchat this past Saturday. While Blac Chyna’s baby bump isn’t too big yet, her three-year-old son, King Cairo, whom she had with rapper Tyga, has been told he’ll be expecting a little brother or sister before long.

Alongside an intimate image of the happy couple, he wrote, “And last but not least happy mamas day to this beautiful Mama, I fell in Love with her immediately because of how great of a mom she is and now I’m looking forward to starting a Family with her! Thank You Chy for everything you do for me LOVE YOU [sic].”

All told, it’s no surprise Blac Chyna will be changing her legal name to Angela Renée Kardashian. After all, she will be married into the Kardashian clan within months, and she and Rob Kardashian will have a family by the end of the year. Plus, it just makes good business sense!