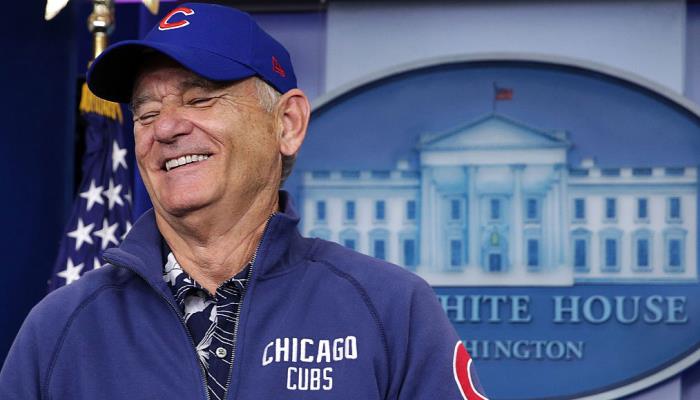 President Obama made an appearance on Jimmy Kimmel Monday night and was his usual classy yet hilarious self. He read mean Tweets and talked about the Cubs’ win and what happened when Bill Murray visited the White House. Since Obama’s words always cause a buzz, people are asking questions about the show to see highlights from what they missed. Here is why President Obama paid $5.00 to Bill Murray.

On Kimmel, Obama related his comments about supporting the Cubs to a recent visit from Bill Murray. Murray showed up at the White House wearing a Cubs shirt. “I don’t usually allow that to happen,” said the President,” Most people come in with a shirt and tie. It was Bill Murray, so I get no tie, but don’t rub it in with a Cubs jersey on.” Murray and Obama ended up playing competitive golf on the carpet of the Oval Office. Murray kept winning and was giving golfing tips to Obama, and at that point Obama gave him $5.00. Check out the video clip below:


Obama Is Rooting for the Cubs

Although Obama is a White Sox fan, he is still cheering on the Cubs because they are his home team. The Cubs made history by reaching the World Series on Saturday—this is the first time they’ve made it this far since 1945. Obama tweeted his support for the team.

He Discussed the Dangers of the Trump Campaign

In Obama’s feature on Kimmel, the President of the United States explained why he believes the Trump campaign is dangerous for America, “There is something qualitatively different about the way Trump has operated in the political sphere.” He continued, “If you are willing to say anything and do anything, even when it undermines everything that’s been built by previous generations, that’s a problem.” Obama explained that although Republicans and Democrats have some “fierce disagreements” and since we are a diverse country it can be “contentious and noisy,” Trump is the first candidate to question “the integrity of elections and the will of the people.”

The replay of Monday’s episode is available on Jimmy Kimmel’s YouTube channel, be sure to check it out to see more clips!