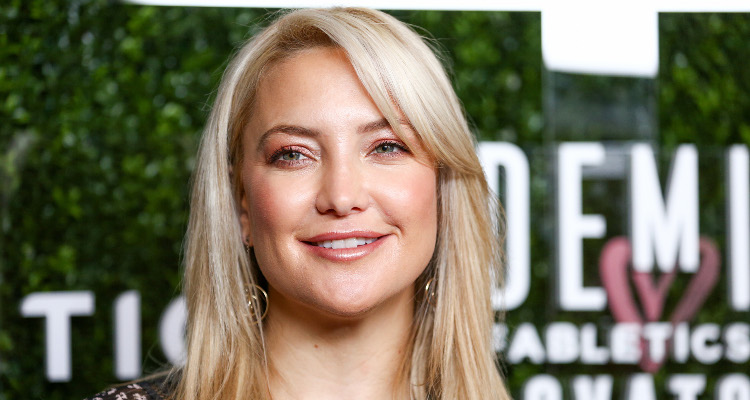 Can you imagine actress Kate Hudson without her signature golden locks? Celebrities change their looks often, but not Kate Hudson. Goldie Hawn’s star daughter has had her long, golden tresses forever! But now Kate Hudson is flaunting a buzz cut on social media that has everyone talking. Why did Kate Hudson cut her hair? Here are the deets on her latest project…and her new style.

Back in July, the Bride Wars star shared a throwback photo with an interesting caption: “To that time when I had hair and a carb loading attack whilst leaving France…” The past tense was a hint at her new hairstyle. Cara Delevingne has proven that Hollywood starlets don’t need long, wavy tresses to look good. But of course people were still curious to know about Hudson’s new look.

The speculation finally ended when pictures of a shorn-head-sporting Hudson on the set of her latest movie surfaced. Not only is her hair short, it’s also a darker, more ashy color than the sunny hairdo we’re so used to seeing her with! However, this woman can do no wrong! The 38-year-old admittedly pulls it off rather well, as we can clearly see on her Instagram.

But exactly why did she ditch her long locks?

For a movie of course! Hudson is starring in the upcoming movie Sisters, directed by Australian singer-songwriter, Sia. Yes, the Sia…and it’s not just one of those “Cheap Thrills.” The hit singer announced her first film directorial venture at the Venice Film Festival after co-directing her music videos. Sia has even shared stills from the movie that show Kate’s closely cropped hair.

#tbt To that time when I had hair and a carb loading attack whilst leaving France…. #CouldntLeaveFranceWithoutThem ??

The Sisters movie, which will be released in 2018, stars Hudson and Sia’s dancing prodigy, Maddie Ziegler, who also sports a short do. Details on the movie have been kept under wraps, but word on the street is that Kate Hudson’s going to dance in the movie. We’re not sure if she can hold a candle to Maddie Ziegler, but hey, we’re still obsessed with the idea.

And social media is pretty obsessed, too. Kate Hudson shows she’s still an effortless goddess without her signature long, blonde hair…and fans are in love. And they’re showing it on Twitter. After getting over the shock of “buzz-cut Kate,” fans are gushing over her new look.

While some stated that the beauty can pull off such a close-crop, others are lamenting the fact that she looks better than any of us mere mortals. Some are even considering the buzz cut for their own look now! Shaving off one’s hair has never looked so tempting.

There’s no substitute for the commitment Hudson has shown in ditching wigs and clip-ons and going full buzz-cut.”For me, it was a necessary thing to do for this part,” she said while promoting for her movie, Marshall. “I was so excited about it. So it was like, ‘Okay, let’s just shave it.’ So it was more excitement than overthinking it.”

The best part is that she didn’t seek a professional for her new look! Her six-year-old son, Bingham Bellamy, was the one to take the clippers to her hair. According to Hudson, Bingham and his brother Ryder don’t really care about their mom’s hair.

Frankly, we don’t care either! Even Hudson advocates the pleasure of not having high-maintenance hairdos. “Every woman at one point should just shave it all off.”

Thank you, Miss Hudson, for showing us the buzz-cut light.

Kate Hudson's new haircut is better than me on my best hair day, that woman can do no wrong pic.twitter.com/aoebrJCoLQ