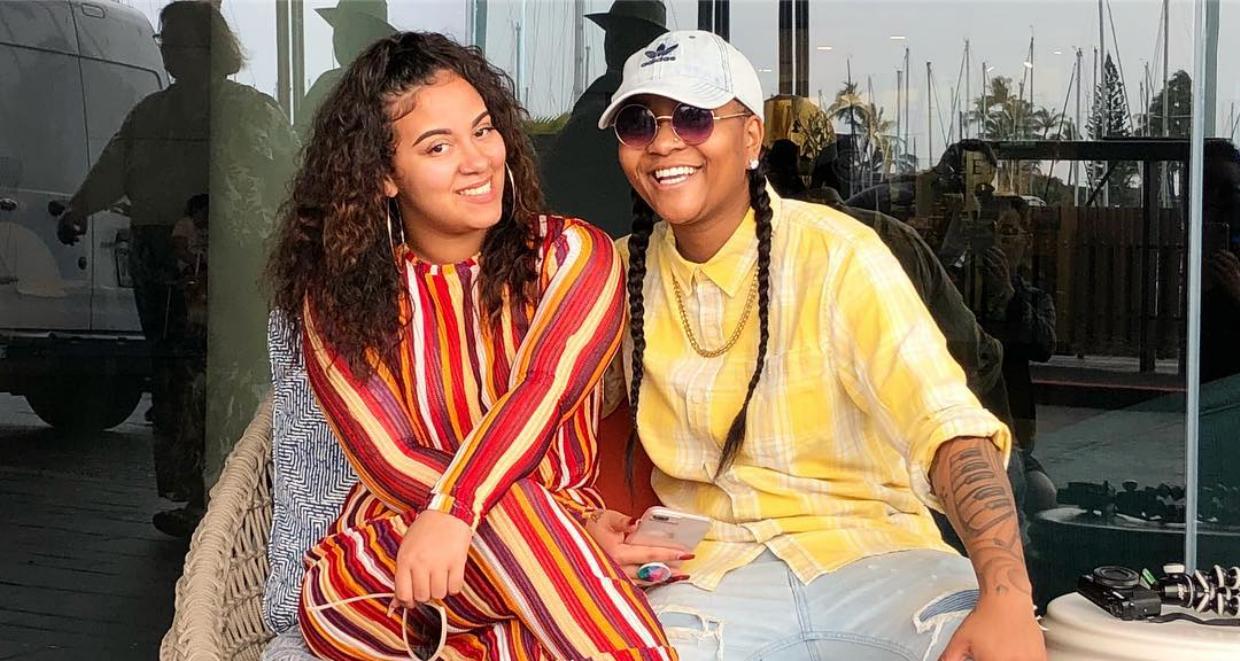 Another one of our favorite YouTube couples bites the dust. Domo and Crissy called it quits in a tearful new video posted on their channel on August 1, 2018, and our hearts weren’t prepared. They won’t be vlogging together anymore, either! But why did Domo and Crissy breakup?

Take a seat. It’s about to be an emotional ride.

Who Are Domo and Crissy?

Domo Wilson and Crissy Danielle are the stars of their prank and challenge YouTube channel, Domo and Crissy, with over 3.2 million subscribers. While Domo was famous for her musical talents, both entertained their viewers with their comedy.

They both had toxic relationships in the past before they came together. Domo and Crissy moved on from their exes to make the cutest same-sex couple on social media! They gave everybody #relationshipgoals! 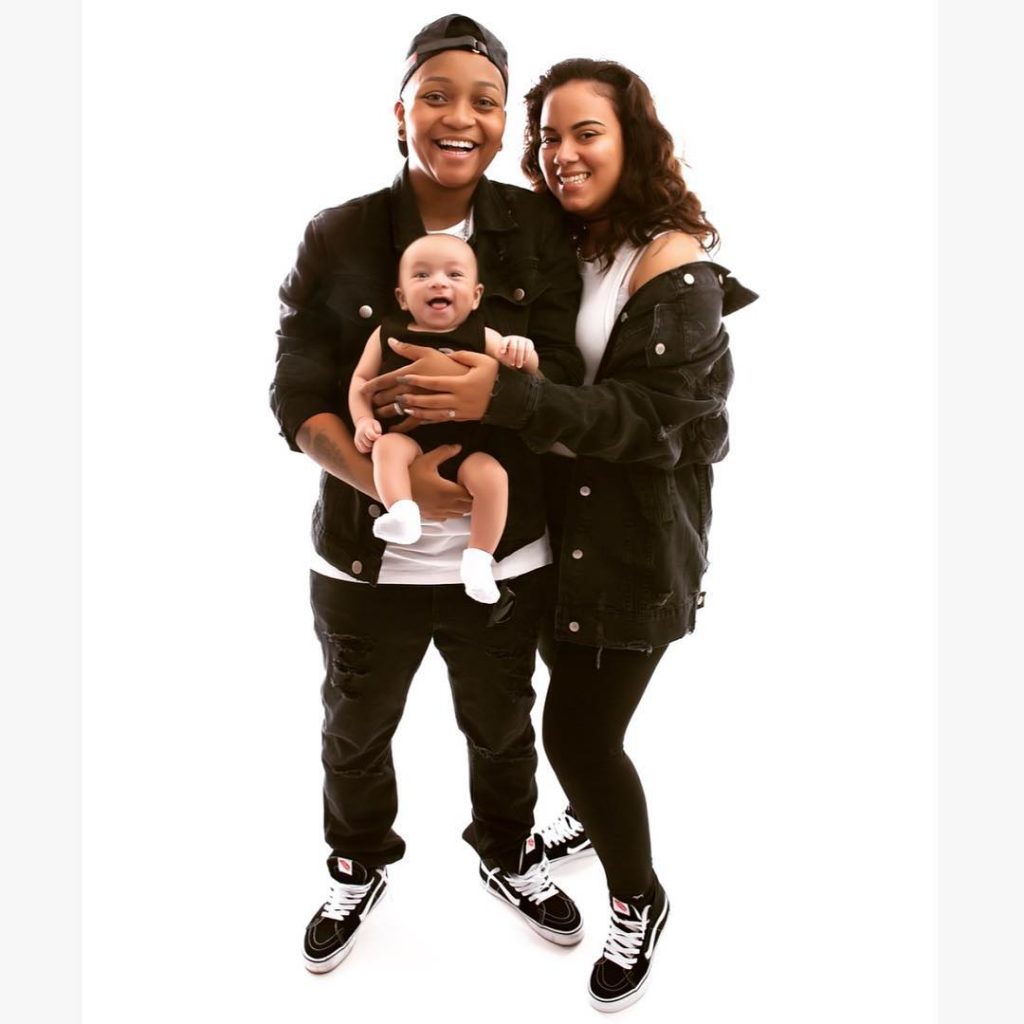 The duo are parents to a boy named Domonic Wilson, who was often featured in their videos. They were engaged in 2016 and were seemingly doing great. That is, until their sudden breakup in mid-July this year. 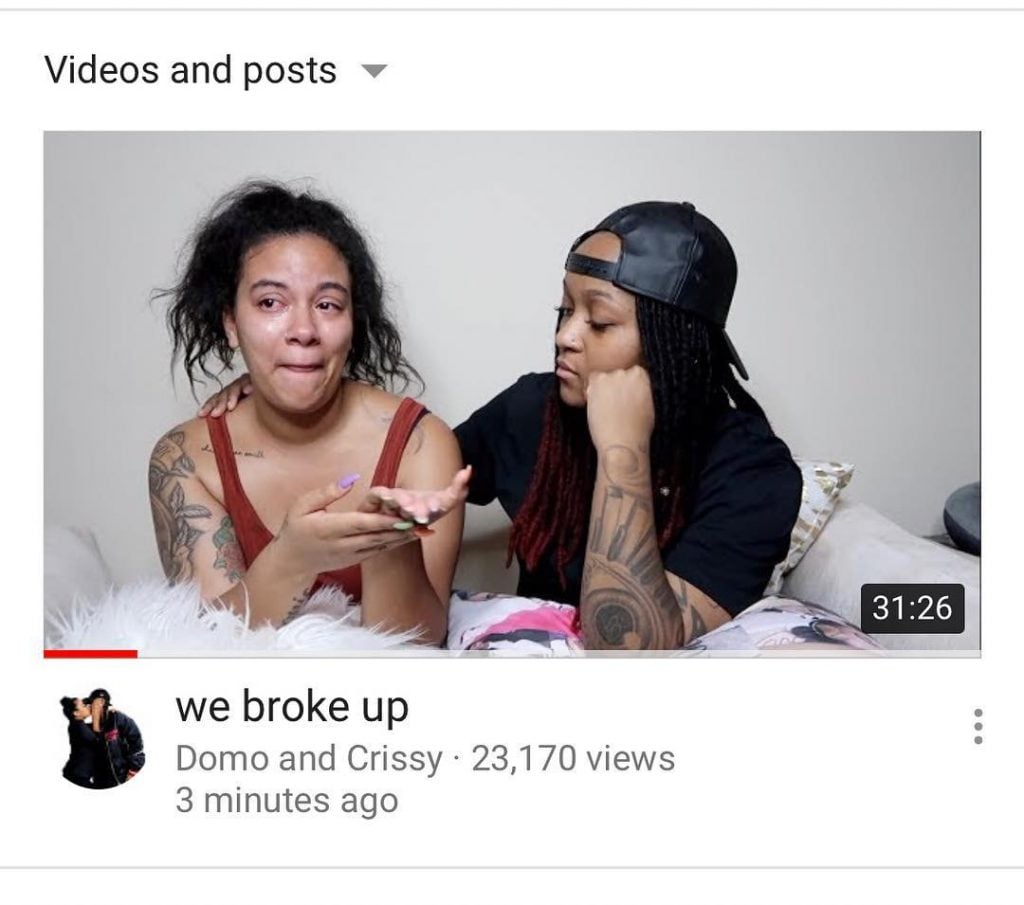 Domo and Crissy broke up. Credits:Instagram/domo.crissy.15

In a video titled “we broke up,” Domo and Crissy revealed they came to a mutual decision to end the relationship, which came as a real shock to all those who followed them. Both emphasized that they still love and respect each other, and they will continue to remain friends.

They even pinky swore that they will always be there for each other. (There are not enough tissues in the world for our tears right now!)

Crissy said that Domo treated her like “gold” and nobody did anything that led them to call it quits. Domo said they simply grew apart like a lot of couples do.

In a 2016 video, Domo supposedly cheated on Crissy, but that was all a prank. It was their first video to surpass 5.0 illion views, so there was no real cheating going on there.

In the breakup video, Domo said that Crissy is the “perfect person” for her and it’s weird for her how they didn’t work out. Fans felt that same! So, why the split?

They tried very hard to work on their relationship. However, they ultimately sat down and talked before mutually deciding to end it. Since they’ve considered this decision well between them, they requested their fans not question or berate them with messages to get back together.

Crissy has signed the lease for her new home where she’ll be living. In about a month, the lease will be up on the home they shared, at which point the couple will be moving out and going their separate ways.

And they are squashing vicious rumors before they even creep up. If Domo writes a diss track or Crissy rants about someone on social media, it would never be about each other. They have nothing but good feelings for each other, even if they are no longer together.

Their fans are obviously heartbroken and pouring out their sorrows on Twitter.

They Will Continue to Raise Their Son Together

Domo discovered in July 2016 that she was pregnant. Domonic Wilson was born on March 14, 2017, and they documented his birth in a video that has received over 4.3 million views.

Although Crissy is not his biological mother, she’s going to continue to raise him with Domo and be a part of his life. They are not going to court, and Domo has no plans of keeping Domonic away from Crissy.

They worked out a schedule between themselves so Domonic will divide his week with both his mothers. Crissy’s new apartment also has a room for Domonic. She plans to give a tour of the new place to YouTube followers in the near future.

Domo, Crissy, and Domonic will spend quality time together as a family and celebrate the holidays together. They even have a family vacation coming up. So, haters, take a hike!

Domo and Crissy respect each other as Domonic’s mothers, and they will continue to raise Domonic with these strong values and love for each other in place.

They Are Going to Vlog Separately

The breakup video is perhaps the last video Domo and Crissy will be posting on their joint YouTube channel, unless they decide to document their moving out of their home as well. They are going to continue their social media careers solo from now on.

They clarified that their relationship was not fake and everything fans saw in their vlogs was real. The former couple said they risked their joint sponsorships and businesses together with the breakup.

In the meantime, Domo wrote a song dedicated to Crissy. They made another emotional video to go with it.

The video will be out soon, so stock up on those tissues in the meantime.