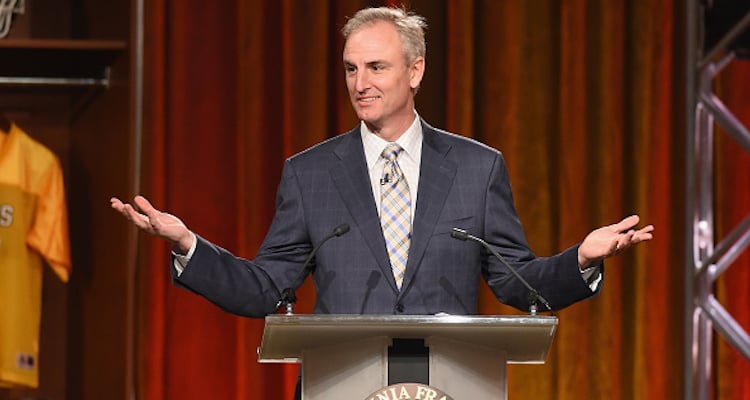 Where is Trey Wingo now? Fans have been asking about the NFL Live host and want to know when they’ll see him again. If you want to know where the sports reporter is and more about his show, then we have what you need.

Wingo, a 54-year-old native of Greenwich, Connecticut, has been with ESPN since 1997 and impressed many when he was able to recall every winner and final score of every Super Bowl, which naturally includes 2018. Whether he remembers to take out the trash for his wife is anyone’s guess, but sports is something as natural to him as breathing. In 2017, he joined Golic and Wingo (formerly Mike & Mike), when he succeeded Mike Greenberg, who used to co-host the show with Mike Golic.

When Sporting News asked about his chemistry on the show, Wingo said, “Those are fun. Look, the first ever NFL Live I did was in 2003 with Golic. It was me, Golic and Bryan Cox, of all people. Mike and I live in the same town about a mile and a half from each other.

He continued, “Our kids went through the same junior football programs together. They went on to play in college. So I’ve known Golic forever. That’s what I’m hoping will make this easy for a lot of people. It’s not like we’re dancing for the first time, we’ve been through this a bunch.”

His Views on NFL Protests

When it comes to the subject of Colin Kaepernick, nothing divides people more, because it always becomes a question of politics versus a question of skill. The free agent and GQ‘s Citizen of the Year for 2017, has ignited several angry tweets from both fans and President Trump. While there are many who don’t (or won’t) understand the reason for the protest, Wingo isn’t one of them.

“Look, it’s a hot-button topic,” he told Sporting News. “There’s no question about it. Unfortunately, social media is basically way to vent for a lot of people. I get it. I understand their concerns. But I also wish they would understand what the concerns are of the people protesting. So many people say, ‘They’re millionaires, how are they being taken advantage of?’ Again, the players have never said ‘It’s us.’ They’re protesting for other people’s rights.”

Where Is Trey Wingo Today?

For those wondering where the sports host is, we have good news! He’s not sick and he’s not quitting—he’s in Hawaii! That’s right, he’s enjoying the sun and great weather in Maui, and there’s proof, courtesy of Trey Wingo’s Instagram account. Everyone needs a break here and there, so we aren’t surprised he picked such a beautiful place to relax. At least he doesn’t have to put up with snow and wind chills!