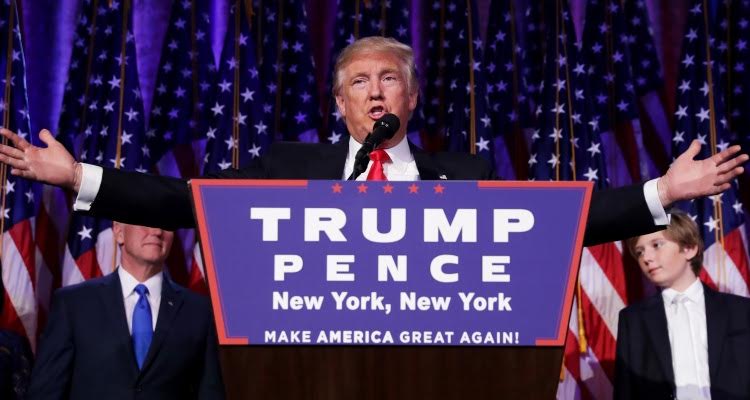 The votes are in and Donald Trump will officially be the 45th president of the United States. He championed over Hillary Clinton with 276 electoral votes and gave his victory speech on Tuesday following the results. If you’re wondering when will Donald Trump take office, the official transfer of leadership from President Barack Obama to Trump will take place Friday, January 20, 2017. The oath taking ceremony will begin at 12:00 p.m. EST on that day.

Trump’s win was such a shock, partially because the real estate developer-turned-reality TV star has no government experience. His victory speech also showed a side of Trump starkly different than the raving man we’ve seen up until this point. “Now it’s time for American to bind the wounds of division,” he said.” It is time for us to come together as one united people. It’s time. [That] is so important to me.” He also spoke kindly of Hillary Clinton, who he’s previously said should be in jail.

The decision is still shocking many across the world, as they watched the possible first female candidate for president fail to excite voters who wanted change, and instead, see a disrespectful misogynist walk to the podium for a victory speech.

I was wrong. I thought America couldn't possibly disappoint me more than it already had. But, I was wrong. RIP America.

President Obama will remain in office until January 17, 2017, leaving eight years of progress for freedom and multicultural acceptance in the hands of a man who has made numerous statements to threaten those values. Many shake their heads in fear and disappointment, thinking that Trump could undo all the work that Obama and his team have done, but that remains to be seen in the days ahead. While Trump has made promises to solve various problems in America, his drastic measures and shocking proposals did not scare away voters hungry for change.

People are hoping that Trump will not run the country like a business, but rather recognize the needs of its people, many of whom are immigrants that have shaped the nation. The president-elect has made many promises and claims of what he plans to do in office, but it remains to be seen how he would and if he could make them a reality. By the reactions on social media, most people seem to be upset that he was elected and are afraid of what he could do now that he is the new president. In the wake of all the controversy surrounding this highly publicized election, many are just happy it has finally come to an end. Many are just hoping that Trump delivers on his promise to bind the wounds of division and unify this great country in order to truly make America great again.