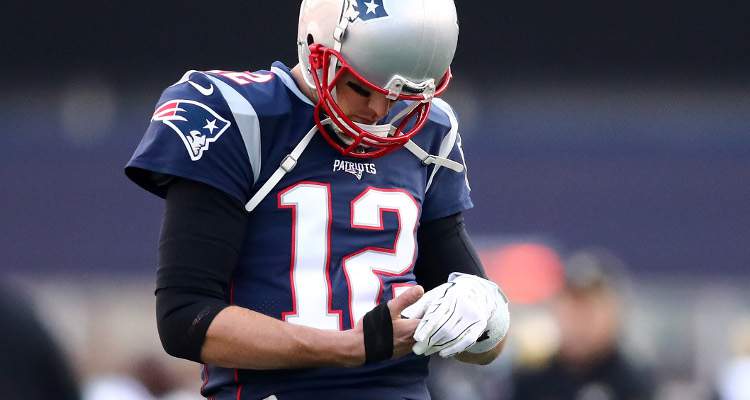 Tom Brady has led the New England Patriots to the Super Bowl yet again, but not without some trouble! The quarterback has been sporting a serious injury during his last few games, even if some haven’t even noticed. How did Tom Brady cut his hand? Here’s what you need to know.

The New England Patriots are on a familiar path to the Super Bowl once again this year, and not even Tom Brady’s injury can stop them. The celebrated quarterback played through a hand injury and won the AFC Championship against the Jacksonville Jaguars, but all everyone can talk about is Brady’s taped hand! What is wrong with Tom Brady’s hand? We’ve got an update on Tom Brady’s injury, right here.

How Did Tom Brady Injure His Hand?

Days before the AFC Championship game on Sunday (January 21), Brady was injured during practice. On Wednesday, he collided with running back, Rex Burkhead while doing a handoff. Burkhead’s helmet buckle hooked Brady’s hand and ripped the skin.

“It was just a very fluke injury,” said Brady adding, “It was something that’s happened a lot of times over the course of my career and there was a collision in practice and, you know, my hand suffered a bit of an injury, but hopefully I can go out there and still be really effective and we’ll see what I can do today.”

According to reports, there was no ligament damage, broken bones, or dislocated fingers. What was there, was a lot of blood. The injury was severe enough to warrant more than 10 stitches on the inside of his hand, near the thumb! The injury is on his right hand, which of course, is his game-winning throwing hand. He skipped practice on Wednesday and Thursday while Patriots fans waited for news on his injury.

The glove was off Tom Brady's right hand after he spoke to the media postgame. pic.twitter.com/cV7Dn8fKXV

Brady went to great lengths to conceal his injury from concerned fans. He prefers not to wear gloves, but has been wearing them to practices and even to press conferences. Before Sunday night’s game, the 40-year-old was seen hiding his hand in his pocket while entering Gillette Stadium. Fans were even frenzied when they noticed he wasn’t carrying his bag with his right hand as is his normal routine.

While the severity of Brady’s injury is kept under wraps, fans were assured that the quarterback is not sitting out any games. “I thought out of all the plays, my season can’t end on a handoff in practice,” Brady said. “We didn’t come this far to end on a handoff.”

True to his word, Brady stepped on the field sporting black tape over his cut. The gruesome, mangled picture painted by earlier reports was no more. He led the team to victory against the Jaguars and didn’t even care about his injury.

There was speculation that Brady would wear a glove to the game to protect the stitches, but he opted to step on the field with black tape instead. He took off the tape much later in the locker room when a photographer snapped a picture of his injury.

The picture of Tom Brady’s hand has created a viral frenzy on social media. But most Patriots fans would claim, “what injury?” Tom Brady is at his very best yet! In fact, there’s a comical theory that this was all a cover-up and he really had surgery to add a sixth finger for another Super Bowl ring!

Devin McCourty with the line of the year on Tom Brady's hand: I didn't notice his hand because his face is so distracting. #WBZ pic.twitter.com/YlF4G6j6sN