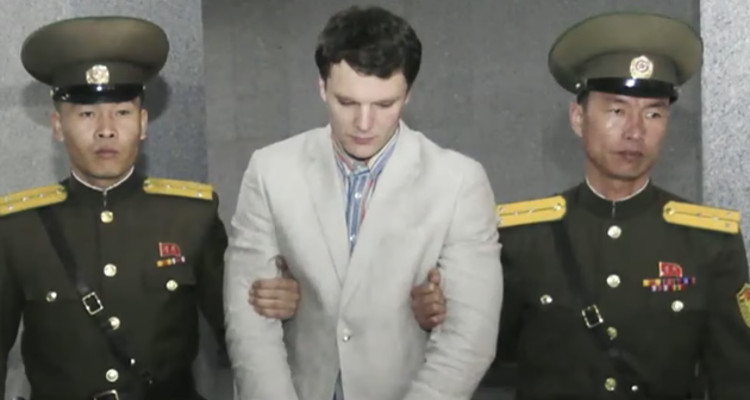 The shocking story of Otto Warmbier is back in the news after President Donald Trump spoke about the incident at Tuesday’s State of the Union address. Warmbier was arrested in North Korea in 2016 and sent back to America almost 18 months later in a comatose state. He died six days after his return. What happened to Otto Warmbier? Why did Otto Warmbier get arrested? We’re revisiting this heartbreaking story to bring you all the details.

Otto Warmbier’s death grabbed headlines in June 2017. He was arrested while on a trip to North Korea in January 2016. While being held in Korean prison, he fell into a coma and died in June 2017, six days after he was sent back to America.

On Tuesday night, President Trump addressed Otto Warmbier’s parents and siblings, who were present in a guest box in the U.S. House of Representatives. He saluted their resolve to fight for tougher actions towards North Korea.

But many are looking into the roots of this story and are wondering, why did Otto Warmbier go to North Korea in the first place? Keep reading to know everything about this tragic incident including details on how Otto Warmbier died.

Who Was Otto Warmbier?

Born on December 12, 1994, Otto Warmbier was raised by his parents, Fred and Cindy Warmbier in Cincinnati, Ohio.

He was an intelligent and popular student at his high school and graduated as his class’ Salutatorian in 2013. He went on to attend the University of Virginia, where he was pursuing a degree in commerce and economics.

Hoping to start a career in investment banking, he loved to travel and even did an exchange program at the London School of Economics.

According to his father, Warmbier was all set for a study abroad program in Hong Kong in January 2016, and decided to visit North Korea on the way.

What Happened to Otto Warmbier?

Warmbier traveled to North Korea with a China-based travel company called Young Pioneer Tours. They catered to young people looking for adventure with slogans like, “This is the trip your parents don’t want you to take!”

Along with Warmbier, 10 other Americans were a part of the group. After spending New Year’s Eve in the North Korean capital, Pyongyang, Warmbier and the group proceeded to their hotel rooms.

But Warmbier was accused of stealing a propaganda poster on January 1, 2016, and was arrested at the airport the next day.

Danny Gratton, a member of the Young Pioneer Tours group, witnessed two North Korean guards taking Warmbier away, and said that there was no explanation.

Otto Warmbier’s was next seen at a press conference in February 2016, where he read out a statement and confessed that he attempted to steal a poster. He was sentenced to 15 years of hard labor in North Korea.

As his parents, friends, and U.S. diplomats fought for Warmbier’s release, he remained in a North Korean prison. He was released only in June 2017, in a comatose state.

Warmbier was rushed to the University of Cincinnati Medical Center, but died six days later, on June 19, 2017. He was only 22 years old.

Our thoughts go out to the loved ones of Otto Warmbier, who passed away today following his return to the United States. // ?➡️ AP // #RIPOttoWarmbier #OttoWarmbier

Otto Warmbier’s death intensified the politically tense relationship between America and North Korea. The situation was further highlighted by President Trump’s State of the Union address on Tuesday.

The President drew attention to the circumstances leading to Otto Warmbier’s coma and death saying, “After a shameful trial, the dictatorship sentenced Otto to 15 years of hard labor, before returning him to America last June —horribly injured and on the verge of death. He passed away just days after his return.”

We will never forget you, #ottowarmbier. Never. Your memory will live on forever. Your life meant something. We will make sure of it.

President Trump then addressed Warmbier’s parents saying, “You are powerful witnesses to a menace that threatens our world, and your strength inspires truly us all. Tonight, we pledge to honor Otto’s memory with total American resolve.”

Social media was buzzing with renewed interest in this heartbreaking story as many people on Twitter paid tribute to Otto Warmbier.

My heart breaks ? for #Warmbier & the other families who lost children in the senseless MURDERS of their children. Praying for all. ?