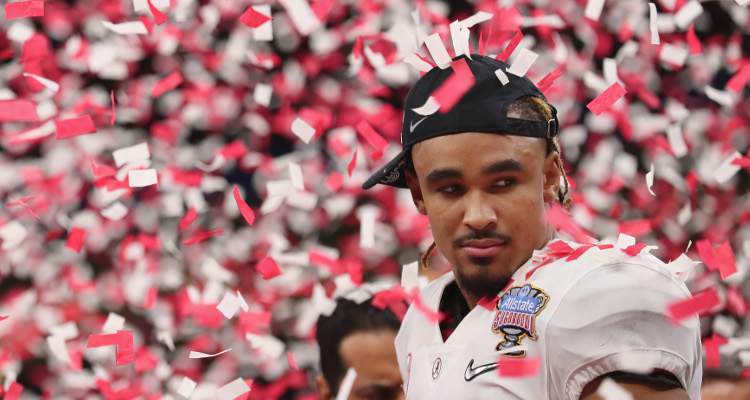 The Alabama Crimson Tide defeated the Georgia Bulldogs to win the 2018 College Football Playoff National Championship! This miraculous victory (which was nail-biting to say the least) occurred after Alabama quarterback, Jalen Hurts was benched. What happened to Jalen Hurts that got him benched? We’ve got the story!

The Alabama Crimson Tide upturned the final game of the 2018 College Football Playoff National Championship in the second half. As the team was on its way to victory against Georgia, their starting quarterback, Jalen Hurts watched from the sidelines. He was benched at the start of the second half and replaced by freshman Tua Tagovailoa, who was the one to turn the game around and win them the championship. But why was Jalen Hurts benched? Here’s what you need to know about Alabama’s victory.

The Crimson Tide is Turning

University of Alabama’s Crimson Tide had a miserable first half against the University of Georgia Bulldogs. Jalen Hurts, Alabama sophomore and quarterback, completed just 3-of-8 passes for 21 yards. The Tide were trailing the Bulldogs 13-0 at the end of the first half.

Alabama coach, Nick Saban noticed the weakness in his team’s offensive line and decided a change-up was necessary. He pulled up true freshman, Tua Tagovailoa to take over for Jalen Hurts in the second half.

Tagovailoa was the force Alabama needed against Georgia. After a scoreless first half, Alabama won the game thanks to a gorgeous 41-yard strike to DeVonta Smith in overtime. Tagovailoa finished 14-of-24 passing for 166 yards and three touchdowns, giving Alabama its 12th championship with a 26-23 win.

What a game. What a finish.

19-year-old Hurts started all 14 games this season, recording 2,868 total yards and 25 touchdowns. Being benched on perhaps the most important game of his collegiate career might have hurt, but he didn’t show it.

Contrary to speculation, Hurts being benched was not due to an injury! It was simply a strategic decision on the part of Nick Saban. “Well, I just thought we had to throw the ball in the game and I thought he could do it better and he did,” the coach explained.

During the game, Hurts cheered for Tagovailoa and the rest of the team from the sidelines. In fact, he was the picture of gracious sportsmanship after being replaced. “He was gonna step in and do his thing,” Hurts said after Tagovailoa replaced him. “We have a lot of guys in the QB room that play really well, and he stepped in and did his thing. Did his thing for the team.”

Ever since Tagovailoa entered the Crimson Tide, analysts believed Hurts’ days as starting quarterback were numbered. It was not to say that he is a bad quarterback. In reality, he’s a brilliant player who was named SEC Offensive Player and Freshman of the Year!

Nevertheless, he’s often criticized for his skills. As Tide running back, Damien Harris said, “I don’t really understand what people … what more people want from him. He’s led us to a national championship [game] two years in a row, in his first two years here. He’s broken almost every school record we have; he’s broken national records. I don’t really know what people want him to do.”

Analysts claim Alabama’s offensive weakened since Lane Kiffin was fired as offensive coordinator. It was only when Tagovailoa stepped up on the field did Alabama’s lackluster offense get invigorated.