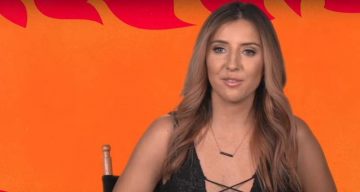 Nearly the entire cast of season 30 joined the nailbiting reunion special, but Camila Nakagawa was noticeably missing. In the second half of the show, we finally got to see who among Derrick, Jordan, Cara Maria, and Camila won the biggest share of the $1.0 million prize. Each of the contestants had to pull a single or a double cross from a box to find out who won. Since Camila was not at the reunion, host T.J. Lavin filled in for her.

In the end, the winners were actually Jordan and Camila! They each got $450,000, while Derrick and Cara Maria got $35,000 each. Camila was not only absent to accept her winnings, but she also didn’t get much of a mention throughout the special until the final result.

It seemed surprising that someone who competed in the franchise nine times before, dominated this season, and won The Challenge for the second time, didn’t even get a passing mention! Twitter was flooded with questions about her absence and some noted that a certain incident on the show may have been the reason she didn’t show up for the reunion.

"Nevertheless, she persisted." You may see me struggle, you may see me cry, you may see me fail… but you will NEVER see me quit. ?✨Thank you all for your support. Cannot wait for this new phase in my life, where the old is behind me and the new is all I can see. ?

The ‘Camilnator’ has had a few meltdowns this season, but none as bad as her fight with a fellow challenger. A few episodes ago, she got into a screaming match with Leroy Garrett, and in a fit of rage, she crossed a line.

Camila got drunk one night and clearly went looking for drama. When she overheard talk between Leroy and Johnny “Bananas” Devenanzio about sending her packing, she lost it! She began yelling at Leroy while he calmly stared back at her. Failing to get a rise out of him, she furiously hurled racial slurs.

In the confessional, Leroy expressed what he felt at that moment saying, “I have no idea why my skin color is being brought into this. At this point I’m starting to lose a lot of respect for the things that are coming out of her mouth.” Other cast members later confirmed that MTV didn’t even air the full extent of Camila’s racism-heavy tirade that night. Yikes!

Not long after the episode aired, Camila was flooded with criticism online. Though she was a frontrunner, audiences didn’t want her to win.

Camila took to social media to apologize to Leroy and to viewers for her behavior. She wrote: “I am deeply sorry for how I treated Leroy and take full responsibility for my actions. He handled himself with grace – I wish I could say the same of myself,” she said in the statement, “From the bottom of my heart, I meant no disrespect and I wish I could take back every word I said. But I can’t and I have to live knowing that I disrespected a human being whom I care for very much. The last thing I would EVER want to do is put anyone in a box based on skin color. I have a deep love for humanity and sincerely regret my reckless words and abhorrent behavior. Moving forward, I am 100% committed to never letting anything like this happen again.”

She’s still getting hate for her rant even after her apology and Leroy himself sent out a tweet indicating he hadn’t buried the hatchet, yet. Her castmates also revealed it wasn’t her first instance of using racial slurs.

With the cast and viewers turned against her, the Twitterverse concluded that it was the reason she sat out from the reunion special. However, she slammed down those rumors by explaining her absence in a tweet, citing “personal reasons” and “a death in my family” for missing out on the episode.

Funny how @CamilaMTV is so quick to jump on social media and apologize to strangers but is yet to reach out me directly ? #thechallenge

However, viewers aren’t buying her excuses, particularly the “personal reasons” bit. Some believe that she was not invited back to the show by MTV because of another drama she allegedly caused. Camila was reportedly cast for her 11th Challenge. However, she reportedly stirred up some major trouble in the upcoming season of The Challenge, which forced producers to cut her from the show.

For those wondering, I could not attend #TheChallengeXXXReunion b/c of personal issues including a death in my family. Tks for the support.

Camila also revealed that she’s taking a break from The Challenge to refocus. It’s not known if she plans to return to the franchise or whether she’ll be asked to return. The ‘Camilnator’ has been called to the franchise several times because of her knack for creating drama. But this time, it appears she went too far.