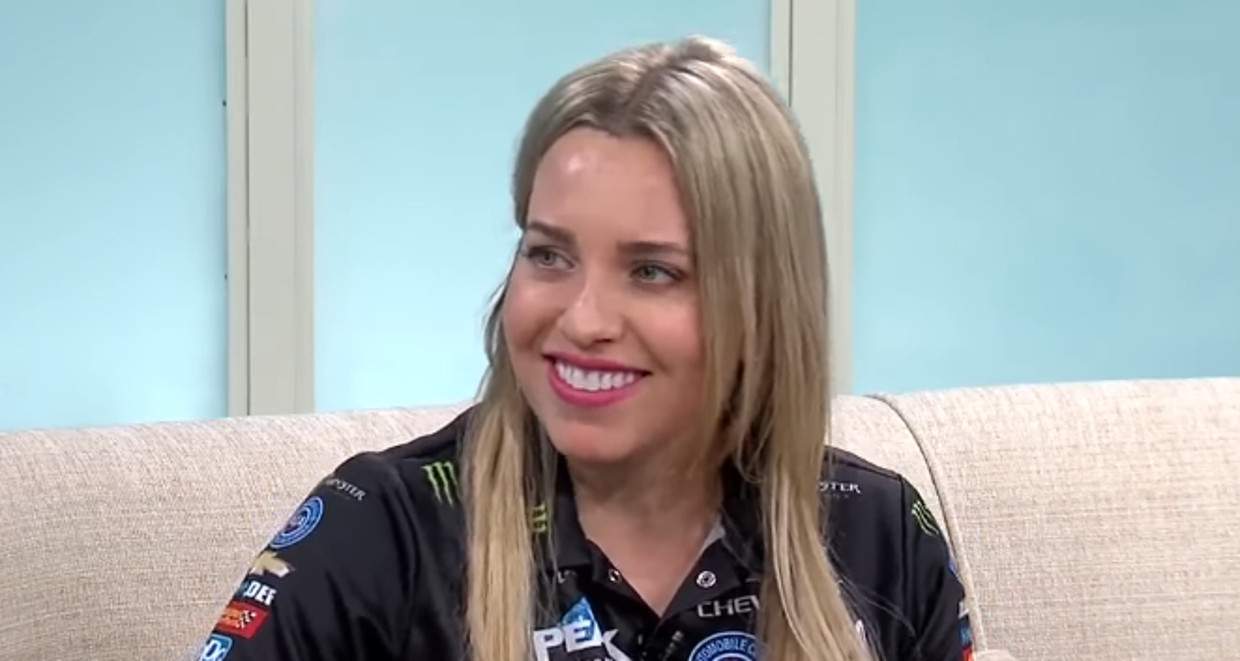 Brittany Force is in the news after she was recently involved in a wall-hitting crash! She escaped a serious injury on Sunday at the opening of the Lucas Oil NHRA Winternationals, but it was a close call! With news of the drag-racing vixen’s crash, fans are wondering what happened to Brittany Force and they want all the details. We’ve done the digging and gathered all the details here. So, keep reading for the scoop on Brittany Force’s injury update and details from the crash.

On Sunday, 31-year-old Brittany Force was drag racing against Terry Haddock in the first round of eliminations, when (just off the start) her dragster veered right and then shot to the left—crossing in front of Haddock—and slammed into the left wall! It then went backward into the right wall, flipped on its side, and spun with the tangled parachute catching the nose.

Force’s dragster skidded to a halt past the finish line. It ended up back on what was left of the four wheels. Force was immediately rushed to the hospital.

As a precautionary measure, Brittany Force was hospitalized overnight on Sunday.

Later, John Force Racing announced in a statement, “Force suffered no major internal injuries but does have some bruising of the lungs. A CT scan was negative, and the MRI showed subtle findings, likely from previous injuries. She was admitted overnight for observation simply as a precaution.”

Brittany Force is certainly lucky to be alive and has been on the mend since. She has only complained about her left shoulder being sore.

Born July 8, 1986, Brittany Force is an NHRA drag racer and 2017’s NHRA Drag Racing Series Top Fuel dragster champion. She is the daughter of famous drag racer, John Force. Her fellow racers are actually her sisters, Courtney Force and Ashley Force Hood! The three were featured on the hit A&E show Driving Force, which was centered around John Force and his drag-racing daughters.

Brittany Force’s drag racing career started in 2013 when she became an NHRA drag racer and started driving Monster Energy’s Top Fuel dragsters. Success soon followed and she went on to become the first woman to win the NHRA Four-Wide Nationals in 2016.

With a run of 3.676 seconds over 1,000 feet, Force set a new NHRA Top Fuel drag racing record at Heartland Park Topeka, Kansas, on May 20, 2016. She set another record in 2017 when she became the second woman in history to win a Top Fuel Championship. (Shirley Muldowney was the first, in 1982.)

John Force said that Brittany Force’s Simpson safety gear, including her Steilo helmet, fire suit, R3 head-and-neck restraint, neck collar, and seat belts kept her safe. In spite of the crash, she was securely strapped into her seat under the canopy.

John Force said, “You look at how these cars evolved over 40-50 years. We made a lot of changes after the loss of Eric (Medlen, the late JFR driver who lost his life after a 2007 testing accident). A lot came out of that: building a better chassis, safer. The car giving way when it hit the wall head-on allowed it to take the impact and fold up (as it was designed to do). I want to thank Schumacher Racing for creating the canopy. When the car was upside down, you know that protects the driver’s head. Want to personally thank Don Schumacher for his investment. Very important. Thanks, Don.”

“Safety Safari was right on top of it, as always. That’s why they’re the best in the business. Finally, John Medlen was one of the first to come to me and wanted to know if she was OK. I didn’t have an answer at the time. But he’s lived it. He knows what all of us go through: owners, friends, parents and sponsors. End of the day, we keep addressing it to get it better,” Force added.

Well, we’re glad that the new safety features are keeping drag racers safe! We wish Brittany Force a speedy recovery and hope to see her back on the track soon enough.