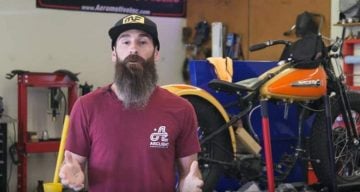 Fast N’ Loud season 13 will air tonight, and fans are wondering what happened to Aaron Kaufman from Gas Monkey Garage. The last we heard, Kaufman was leaving Gas Monkey, but the reason was unknown. Keep reading if you want to know what Aaron Kaufman is doing now.

Gas Monkey Garage will see a lonely Richard Rawlings taking Fast N’ Loud forward to its season 13. Fans who are amazed at Aaron Kaufman’s inside knowledge and watched the show only for him, are going to be disappointed with tonight’s episode.

Why did Aaron leave Gas Monkey? Scroll down for all the answers behind Aaron Kaufman’s whereabouts.

Aaron Kaufman was a master mechanic on the show that focuses on tweaking and tightening car parts—making them bigger, faster, and of course, louder. Kaufman and Rawlings were the genius duo who could turn any piece of metal into revving art!

The show began back in 2012. After five years of being a vital part of the mechanic duo and a front-runner of the TV show, Kaufman decided he wanted something more.

Discovery’s Fast N’ Loud is renewing the show for a 13th season, but this time around, there will be no Aaron Kaufman. So naturally, fans are confused as to why he will be missing from the show, and the reason will make Ford fans go crazy!

Where Is Aaron Kaufman Now?

On the show, there were times when Kaufman couldn’t do what he thought was creative and fun. But, there were some obvious requirements and limitations.

In an interview, he said, “That was the rub, the crossroads there, I wanted to build cars that were that big or bigger, and then TV needed cars that were much smaller than that.”

All his caged up ideas needed expression. So, Kaufman felt the best things for him to do was leave the show and go his own way.

“On top of that there were some growing personal issues and professional differences of opinions and so I decided the time had come and I could see the fork in front of me,” said Kaufman.

Get caught up with season one of Fast N Loud. Get it here!

So, Kaufman went ahead and ventured off on his own. He launched arclightfab.com, which is a website where you can buy rigged out car parts, and check out the latest trends to pimp up your ride.

He made up his mind when he saw a fork in the road. And by mid-2017, he already had his website up and running.

According to Kaufman’s website, he is passionate about Ford. He wants to do something about the F-100 model, as people have done for many Chevy trucks.

Kaufman says on his website, “Well, being a truck sorta fellow and a blue blood at that (FORD). I decided to see if I could start to patch the hole in the aftermarket for Ford’s F-100 line of trucks.”

You can check out the rad site and even buy some parts for your F-100, or you can just window shop for the latest trends in cars and parts. Arclight even has some awesome merchandise like t-shirts, caps, and decals for sale.

Had the folks from the Dallas Morning News out to see what’s been going on here at the shop. There’s some cool info in this story you may not want to miss. Check it out! (Link in bio) #arclightfab #aaronkaufman #f100 #ford #guidelive #dallasnews #shiftinggears

Kaufman’s fans shouldn’t be disappointed because the mechanical genius is about to do a lot more with his new concept. And who knows? He might even return to TV with his own show!

The reps at Discovery said, “We hope to keep Aaron Kaufman in the Discovery family and are working on the future.”

So, there you have it! Aaron Kaufman is very much active in the world of engines and motor oil, and we’re pretty sure that this is not the last we see of him!