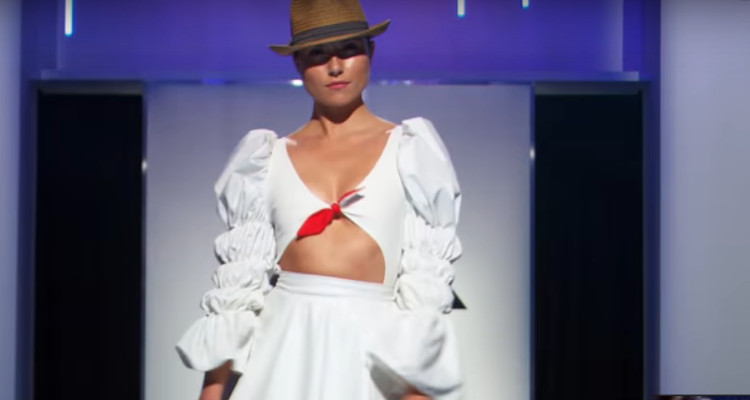 On Project Runway season 16, Claire Buitendorp was accused of copying the designs of fellow designer Margarita Alvarez, who told everyone that would listen. The judges ultimately chose Claire as the winner and Margarita tears moved no one.

The Project Runway season 16 cheating scandal is all anyone can talk about today! Two of the contestants were involved in a scandal when designer Claire Buitendorp allegedly stole a design from Margarita Alvarez. What happened on Project Runway? Did Claire cheat on Project Runway? According to Margarita, she did, and Margarita is mighty upset with Claire for playing it unfairly, telling everyone around her that Claire copied the look she presented last week. Most people didn’t care what Margarita said, even though she kept repeating herself. Claire was missing her twin, Shawn, which she kept telling her client about, and pretty loudly to no one in particular.

Margarita was watching Claire like a hawk as she went about her work. It was at this point that Margarita started getting upset, saying that Claire was copying her design from last week. When Margarita complained to others, Amy said that the situation was “subjective.” The drama was enough to throw Margarita off her game as she did not put out her best design, which she later apologized for and even cried in front of the judges. Nobody would have guessed that Claire, who had narrowly escaped the episode’s first elimination, was named the winner of this week’s challenge.

Fashion designer and judge Zac Posen said that Claire’s garment didn’t have the most unique look, but it was “chic!” Most importantly, it was what her client wanted. To make matters dramatic, Michael Brambila stormed off stage in anger because Claire won. He later said, “I came to play fair, and there is no fairness in this game,” and it was revealed that he was upset because Claire’s “original pants were too similar to a pair she already had in her room.” Coming after Margarita’s paranoia about her design being stolen, it looked like Michael was making a big deal over nothing. Whatever Margarita and Michael think, Claire survived another week and we will just have to see how the drama plays out!