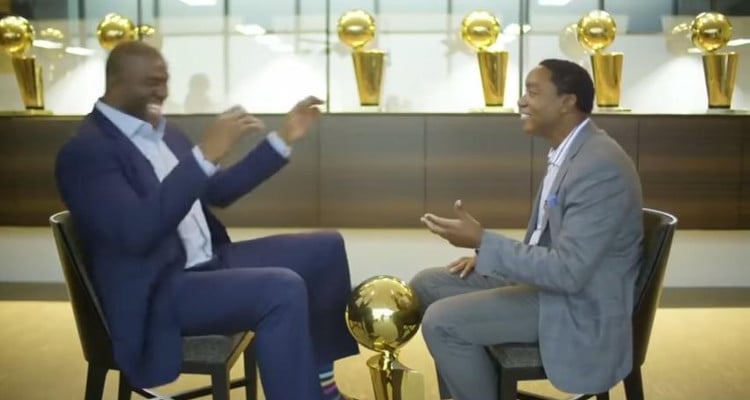 For those of you who had a little hope and believed that Magic Johnson and Isiah Thomas would reconcile, then you were right! The NBA Hall of Famers have patched things up in a rather emotional conversation. Keep reading to know more about Magic and Isiah’s friendship right here.

Magic Johnson and Isiah Thomas were names that were synonymous with each other for years. However, their friendship began to fall apart after Thomas opted out of an Olympic match. Then, Johnson came out with his AIDS announcement, to which Thomas’ reaction was not expected.

Here’s what happened between Magic and Isiah.

Basketball was a way of life for Magic Johnson and Isiah Thomas. The two were best friends all throughout the ‘80s, but with the end of the era came the end of their friendship, too.

Join me in welcoming my childhood idol and friend @JuliusErving aka "Dr. J" to @Instagram! #TheDocIsIn

Thomas began questioning Johnson’s sexuality after the latter announced he had AIDS. Thomas reportedly made this matter locker room banter, which did not sit well with Johnson.

It was also alleged that Thomas began spreading rumors about Johnson’s sexuality. According to reports, he was going around telling people that Johnson had AIDS because he was gay or bisexual.

The two were more like brothers than best friends. And although they played for rival teams (Magic Johnson for the Los Angeles Lakers and Isiah Thomas for the Detroit Pistons), they kissed and hugged during their matches. Thomas even fought for Johnson’s inclusion into games even after his AIDS condition was diagnosed.

However, Johnson’s agent, Lou Rosen, had reportedly told him that Thomas was spreading rumors, and Johnson was deeply hurt.

“Isiah kept questioning people about it…The one guy I thought I could count on had all these doubts. It was like he kicked me in the stomach,” Johnson had said.

But, when Johnson questioned Thomas, he denied spreading any such rumors.

In 2009, when he was promoting his book, When the Game Was Ours, Johnson said, “We had an incredible relationship. We used to do everything together back in the day, and then that kind of faded. It was a tough period. Probably when we played those two championships made that happen. Then it just really went in opposite directions from then.”

Johnson himself has seen a fair share of controversies in the past with sexual harassment lawsuits. And, when Johnson led the Olympic dream team, he made sure that Thomas was not on the team and confessed to it, too.

“Nobody on that team wanted to play with him. … I’m sad for Isiah. He has alienated so many people in his life, and he still doesn’t get it. He doesn’t understand why he wasn’t chosen for that Olympic team and that’s really too bad. You should be aware when you’ve ticked off more than half of the NBA,” Johnson wrote in his book.

So, the core of their beef is pretty simple—betrayal.

But during the NBA Players Only Monday interview, the two sat face-to-face and confronted each other like they should’ve done long ago.

You can check out a very emotional Isiah Thomas hugging it out with Magic Johnson below.

“Let me apologize to you. If I hurt you. That we haven’t been together.”#PlayersOnlyMonthly pic.twitter.com/nDpfDfZek8