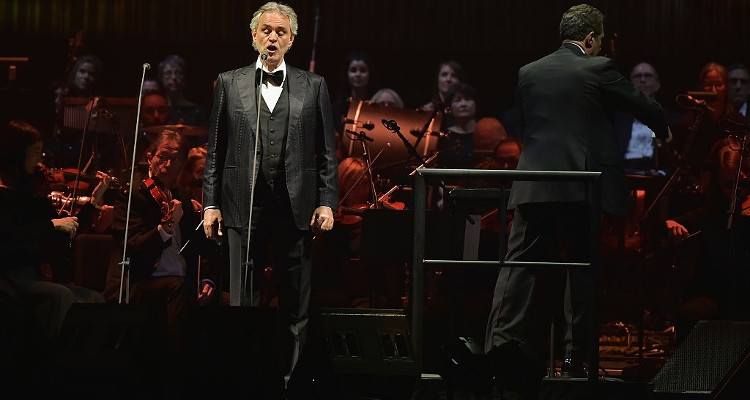 Classical operatic tenor Andrea Bocelli is famous for his music as well as his friends like Pope Francis, Celine Dion, Ariana Grande, and Jennifer Lopez, to name a few. With numerous beautiful duets alongside some of pop music’s talented singers, it’s no wonder that Bocelli has had so much success across over multiple genres.

In his illustrious career spanning more than three decades, the famously blind Bocelli has always managed to remain relevant and gain countless fans around the world. But many are curious about the eye condition that led to his blindness. Keep reading for more on his childhood and rise to stardom, as well as the latest updates on his newest album and 2019 tour.

Andrea Bocelli wasn’t born blind. However, he did have vision problems since birth. While pregnant with him, his parents, mother Edi Bocelli and father Alessandro Bocelli, were advised by doctors to abort their child as their studies predicted the baby would be born with a disability. Andrea stated that his mother’s decision to give birth to him is the inspiration behind his pro-life advocacy to this day.

Andrea was born on September 22, 1958 in a small town in Tuscany, Italy, approximately 25 miles south of Pisa.

As predicted, he had numerous problems with his sight throughout his childhood. After several visits to different doctors, Andrea was diagnosed with congenital glaucoma, which left him partially blind.

In 1970, when Andrea was 12 years old, an accident caused him to lose his vision completely. Andrea was the goalkeeper in a soccer game when he was hit in the eye, resulting in a brain hemorrhage. Doctors tried their best to save Andrea’s sight, even attempting to use leeches, but were unsuccessful.

Visual impairment did nothing to stop Andrea from living life on his terms, however.

Bocelli Was Musically Gifted as a Child

In spite of his physical limitations, Andrea Bocelli learned the piano, flute, saxophone, trumpet, trombone, guitar, and drums. Through his nanny, he was introduced to the music of Frank Corelli, and from then on, Bocelli wanted to pursue a career as a tenor.

As a child, it was clear that Bocelli was an extremely talented singer. At the age of 14, Bocelli won his first singing competition singing the Italian song “O Sole Mio.” Eventually, he went on to study law at the University of Pisa and worked as a court-appointed lawyer for one year after graduating law school.

During that time, he performed at local bars and restaurants to earn some extra money. That’s how he met his first wife, Enrica Cenzatti, in 1987. They were married in 1992 and had two children together, Matteo and Amos Bocelli.

Bocelli’s Rise to the Top

Andrea Bocelli’s music career took off in the mid-1990s after spending a number of years performing as a pianist in bars and restaurants across Italy. In 1994, he was the recipient of the Newcomers award at the Sanremo Music Festival and this introduced him to a worldwide audience.

In 1999, he was also nominated for the Best New Artist award at the Grammys, but the honor ultimately went to pop and R&B icon, Lauryn Hill.

Throughout his shining career, Andrea has released 15 studio albums, three greatest hits records, collaborated with countless artists, and sold over 90 million records around the globe.

His good friend and one-time duet partner Celine Dion famously said, “If God had a singing voice, he would sound like Andrea Bocelli.”

High-profile record producer David Foster has also sung Andrea’s praises and collaborated with the singer numerous times, often saying he has one of the most beautiful singing voices in the world.

Out of all the artists Andrea has had the pleasure of singing with, perhaps the most captivating to audiences was his son, Matteo.

The duo recorded and released their haunting hit single, “Fall On Me,” in October 2018. The song appears on Andrea’s latest studio album entitled Sì and is a celebration of the joys of being a parent.

In addition to sons Matteo and Amos, Andrea has a daughter, Virginia Bocelli, with his second wife, Veronica Berti.

After a 14-year-long hiatus from touring, and not releasing an album for about nine years prior to that, Bocelli announced new tour dates in October 2018. The tour started in the latter half of 2018 and will continue through 2020, spanning every continent.

In North America, so far, there’s only one Canadian date scheduled in Vancouver, British Columbia, on June 13.

On the other hand, there are numerous U.S. dates.

From there, he’ll hit up: