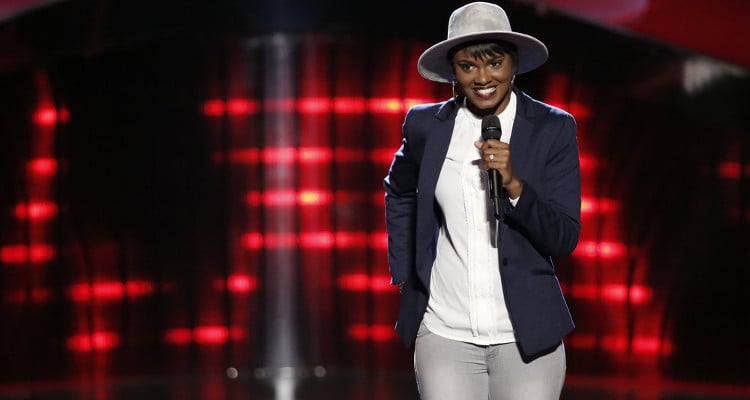 It’s the final week of The Voice Battle Rounds and the competition to make it to the Knockouts just got tougher. Vanessa Ferguson and Autumn Turner will take the stage, hoping Coach Alicia Keys picks them to move on to the Knockouts.

The stakes just got higher on The Voice with the final week of Battle Rounds. It’s the third Battle tonight (March 27), and Alicia Keys is sending in Vanessa Ferguson and Autumn Turner. The two spectacular artists will be dueling with a duet for Coach Alicia to pick one artist for the Knockout Rounds. Here’s what to expect from the Vanessa Ferguson vs. Autumn Turner’s battle tonight on The Voice.

Vanessa Ferguson’s Journey to The Voice

Vanessa Ferguson traveled the world before finding her way to The Voice stage. She comes from New York and now lives in Greensboro, North Carolina but is a worldwide performer. You could see that the moment she belted out “Don’t Let Me Down” by The Chainsmokers. Gwen Stefani, Alicia Keys, and Blake Shelton turned their chairs and fought over this dynamic artist.

Though the coaches were witness to her talent for the first time, she has fans both locally and abroad. Her bio on the NBC web site says, “After being diagnosed with endometriosis, she was hospitalized monthly and poured her heart into music. In 2011, she lived in Beijing, performing six nights a week at the LAN Club, and later toured the world on the Holland America cruise line for five months with the B.B. King’s Blues Club All-Star Band.”

Trained in piano from the age of five, the 32-year-old performed with a local Greensboro band by producer, Gavin Williams before touring with the Larry Draughn Music Group. She has performed in Italy, France, Turkey, Spain, and China with her own band now. It was Gavin Williams who recommended she audition for The Voice.

She has been performing for 11 years, but has yet to make a break into the industry. “It’s good to now be on a platform where it’s almost like a step up in the industry now. I have people in the industry seeing what I am able to bring to the table,” she told a local Greensboro publication.

Autumn Turner sang Donna Summers’ “Last Dance,” but that was far from being her last song on The Voice. She got all four coaches to turn their chairs, but her previous attempts to break into the industry were not as fruitful. According to her bio, the 25-year-old was part of a girl group, Bloom, that failed to make it.

Turner started training as an ice-skater from the age of three and competed in the sport until she was 13. By 16, she was an established ice-skating coach. But this New Jersey native, who has been singing in her church choir since she was young, dreamed of a music career.

Initial failures made her give up on her dream, and she worked as an English teacher in a local private school. But she decided to pursue her music dream again with The Voice. She eventually picked Team Alicia because the multi-Grammy-winning artist preached the same advice Turner gave to her ice-skating students.

Day by day I feel more and more blessed for this wonderful opportunity. I could not be more grateful for this! Thank you to all my new fans and fans I've had for many years. 😘😍 @nbcthevoice

Tonight, Ferguson and Turner will face-off to advance to the next round. Their song choice is still under wraps, but it’s going to be an intense duel, especially when the other three coaches are ready to steal Alicia’s star artists the first chance they get! Watch The Voice Battle Round 3 tonight, at 8:00 p.m. EST only on NBC.