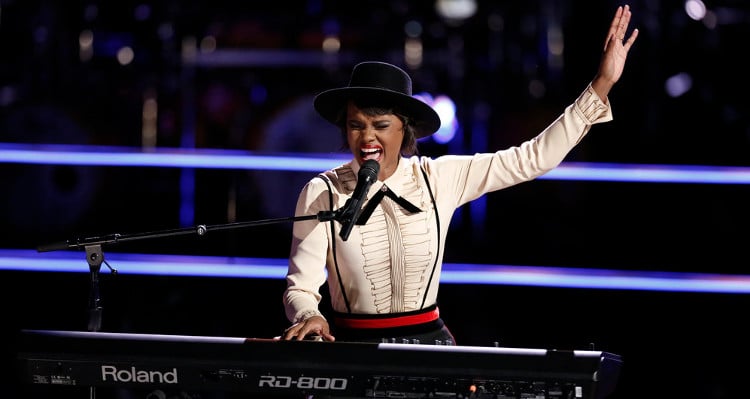 Vanessa Ferguson has been making some serious waves on The Voice. After breezing through the Blind Auditions, the Battle Rounds, and the Knockouts, she’s now ready for the Live Playoffs!

After two spectacular performances, Vanessa Ferguson advanced to the Knockout Rounds. Coach Alicia Keys had pit Ferguson against Jack Cassidy in a piano duel, and Ferguson won. The Live Playoffs stand between her and the Top 12 and given her mind blowing performances, she could win the entire competition. Adorably, she performed the song, “If I Were Your Woman” by Gladys Knight and dedicated it to her fiancé. She’s engaged to a hip-hop artist named Ken, but they have put the wedding plans on hold so she can compete on The Voice.

The 32-year-old battled against all odds to become a singer. She was in and out of the hospital due to endometriosis, and poured her heart into music. Now, the singer-songwriter performs with her own band, who have toured around the world, performing gigs on cruise ships and in countries like China, Italy, France, Turkey, and Spain. So, you could say we have an international artist on The Voice! You can get more insight into her journey on The Voice straight from the source via all of Vanessa Ferguson’s social media accounts. Her Snapchat username isn’t known yet, but she’s active on Instagram, Twitter, and Facebook. Take a look at her social media usernames below!

She only has 21 posts on Instagram so far, but Vanessa Ferguson already has 1200 followers! That’s the power of The Voice! It appears that she wasn’t active on social media prior to the Blind Auditions, but she posts about the show a lot lately, along with a few posts featuring her own gigs. If you’re eager to follow Ferguson, check out her Instagram username, “vanfergofficial.”

Team Alicia’s artist started her Twitter account with tweets about her shows and where she and her band would be performing. She then revealed that she made it to The Voice Blind Auditions, and since then, it appears that she has become more active on Twitter, tweeting about her performances before going on stage and sharing backstage updates. She still seems to post a lot less activity than her other competitors, but maybe her focus right now is on winning the competition, rather than posting about it!  She currently has over 800 Twitter followers, so follow her on “@VanFergOfficial.” Come on people, we need to get that follower count in the thousands! It’ll go a long way when it comes to the “Live Twitter Save” later in the competition!