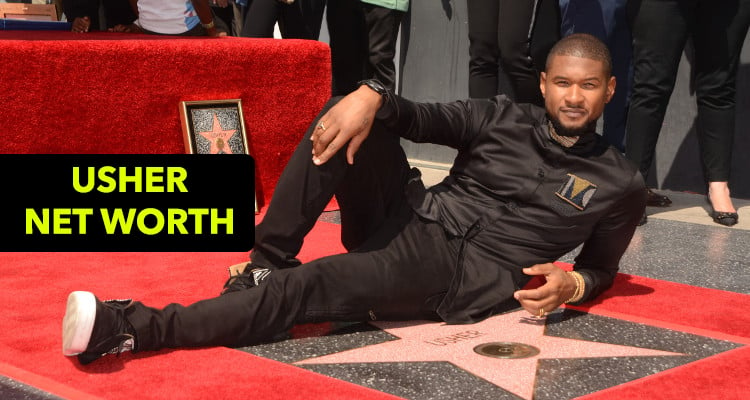 Usher has come a long way from his days singing in a gospel choir. He’s now a successful R&B singer, songwriter and also a suave dancer. Most recently, he’s received praise for his acting prowess in the biographical sports film, Hands of Stone.

Is there anything he can’t do! With so many jobs, business ventures and endorsements, it’s no surprise that the Usher’s estimated net worth is a whopping $180 million! With his new movie and upcoming album, Hard II Love, his worth is slated to increase even more.

The 37-year-old star, who’s known for his artistic tastes, revealed the cover art for his new album – an imperfect bust of himself created by artist, Daniel Arsham. Many producers, such as Brandon “B.A.M.” Hodge, Rock City, Carlos St. John, R!O and K-Major are involved in the production of this album, which is set to release on September 16. Artists such as Nicki Minaj, Ed Sheeran and Chris Brown are featured in the new album, as well.

“The portrait sculpture of Usher is made in ash and Crystal, as if we are in the year 2800 looking at an eroded statue made of you in 2016. The cracks and erosions in the sculpture represent “Flaws” and that things and people are not always as perfect or beautiful as they appear on the outside – relating to some of the themes in the album.” – Daniel Arsham #HardIILove #8days Pre-order now ????????http://smarturl.it/iHardIILove

Usher Raymond IV spent most of his life in Chattanooga, where he sang in the local church choir group. He then moved with his family to Atlanta, which had a more conducive environment for aspiring singers. At the age of 14, he competed on Star Search, where he was scouted by a representative of LaFace records. After auditioning in L.A., Usher signed up with LaFace records, but while Usher was preparing to make his debut, his voice started changing due to puberty. The artist was on the verge of being dropped by the label, but he pleaded with them to keep him on. The owner of LaFace arranged for Usher to be sent to Sean ‘Puffy’ Combs for a “Flavor Camp,” which Usher, years later, dubbed as “the hardest time in his life.” His 1994 self-tiled debut album (on which Sean ‘Puffy’ Combs was an executive producer) has sold over 500,000 copies to date. While the album itself was a success, Usher was given some flak for being a 14-year-old singing about sex. Usher’s fourth studio album, Confession was a chart-topper. It won numerous awards and raised Usher’s position as an artist. The album sold over 10 million copies in the U.S. alone.

The R&B poster child has expanded beyond music and has succeeded in a variety of ventures. Usher is tthe co-founder of the Raymond Braun Media Group, along with Scooter Braun. The most successful artist from this company is Justin Bieber. Usher is credited with the discovery of the teen heartthrob.

Aside from the record label, Usher also owns the restaurant, The Grape. He’s also part owner of the Cleveland Cavaliers Basketball team! He even launched his own fragrance line in 2007. He’s also had various stints on reality competitions and is one of the many owners of popular music streaming service, Tidal. Usher has signed numerous endorsement deals with MasterCard, Mercedes Benz, Samsung, Pepsi and Belvedere Vodka.

Usher is a staunch feminist and avid art collector. He’s good friends with graffiti artist, RETNA who did the album art for Justin Bieber’s Purpose. His friend, Daniel Arsham contributed to the cover art for his latest album, Hard II Love.

The soulful musician diversified into acting early on with the 1997 sitcom Moesha, opposite singer and former America’s Got Talent judge, Brandy. Following that, he did a number of roles in feature films. His first leading movie role was in the 1999 film, Light it up. He plays legendary boxer Sugar Ray Leonard in the biopic, Hands of stone, which was released on August 26 and is based on the life of Argentinian boxer, Roberto Duran.

Usher founded the non-profit organization, New Look to give youths a better life through education. His efforts through New Look earned him the Freedom Award by the National Civil Rights Museum in Memphis. In 2005, Usher was one of the performers in the Hurricane Katrina relief concert. Usher also did his own bit in helping the victims of Hurricane Katrina by launching Project Restart. The initiative helped over 700 families in New Orleans. Usher also donated to a scholarship program for a student to attend Tuskegee University. He’s also done a lot for his hometown of Chattanooga.

Usher launched a campaign in 2007 to support then presidential hopeful, Barack Obama. He partnered with Sankofa, an organization fighting against social injustice and during its 2015 panel, Usher introduced his music video, “Chains” with a heavy police violence theme. He also attended a fundraiser for Hillary Clinton in 2015.