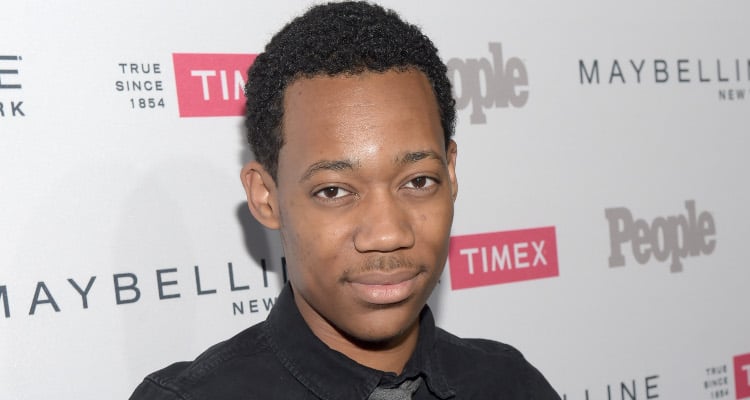 Tyler James Williams’ big break was playing a young Chris Rock in Everybody Hates Chris. He’s all grown up now and his acting has definitely matured. He’s now a critically acclaimed rising star.

When he was a kid, Tyler James Williams brought us laughter in the Chris Rock show, Everybody Hates Chris. These days, he’s making us fall in love with him more and more with his movies. There are girls who’d love to get a piece of the multi-talented artist, but who is Tyler James Williams dating? Recently, interest in his dating life has increased and many are asking if Tyler James Williams is gay or married. Take a look at the Criminal Minds: Beyond Borders star’s relationship history right here.

As far as we know, the 24-year-old is not gay. Though the interest in his romantic life is high, he’s rarely seen on dates. But the rumors about his sexuality were fueled by his appearance in Netflix’s hit series, Dear White People.

The comedy-drama satirized racial tensions in a fictional Ivy League college. Williams played Lionel Higgins, a black gay student aspiring to be a journalist. This is prior to the Oscar-winning movie, Moonlight raising the issues of gay people in the black community. Williams actually felt he was shunned by his community for portraying a gay character on screen.

Taking a cue from a statement made by Chris Rock (who gave him his big break), African-American artists are pressured by the community to represent them in a positive way, and Williams received backlash for portraying a gay African-American.

Sadly, his acting was clouded by the negative perception of African-American gay people. The Walking Dead actor is straight in real life, but he’s keen on representing the LGBTQ community, just as he was when he read the script for Dear White People. “When am I going to see an accurate portrayal of an everyday, regular gay guy? When I read it, it was like, ‘This is the right place to do that,’” he explained.

Check out Williams’ interview on his role below:

Now that we’ve got Williams’ sexuality out of the way, everyone is probably dying to know which celebrities he’s dated. Unfortunately, there’s no record of his dating timeline made public. Either he’s very dedicated to his craft to make time for romance, or he’s a ninja at dating off the radar!

But years ago, a teenage Williams was romantically linked to another teenage star, Keke Palmer. But it was just their chemistry and friendship that sparked dating rumors, when he guest-starred on Palmer’s Nickelodeon show, True Jackson, VP.
While the hip-hop artist keeps his personal life on the down-low, he still treats us to tidbits on his Instagram. And from the looks of it, he could be in a relationship with Anastasia Baranova, a 28-year-old actress best known for Z-Nation. They haven’t officially confirmed it yet. But, hey, if they’re posting about red carpet dates, holding hands, and general “couple things,” we guess Williams and Baranova are official!