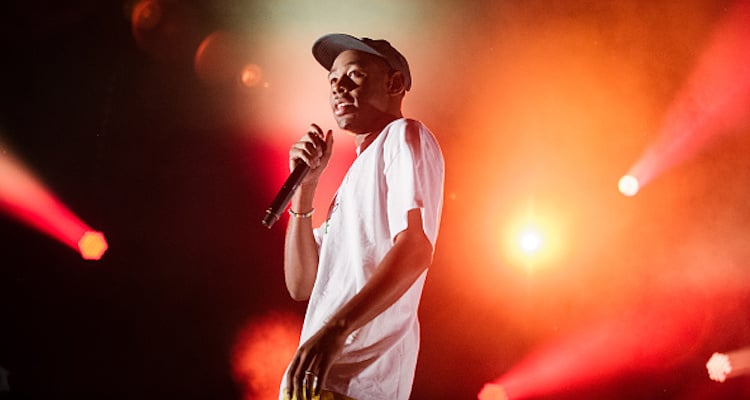 Is Tyler the Creator gay? Rumors have been surfacing online that the rap artist has come out as either gay or bisexual on his new album. The album, which leaked over the weekend, has sent fans rushing to social media to point out the suggestive lyrics from his song “I Ain’t Got Time!” Does Tyler the Creator have a boyfriend? Here’s what you need to know about the lyrics that have fueled the rumors.

The lyrics in question are the following: “Next line will have them like ‘woah’ / I been kissing white boys since 2004.” If those lines aren’t based on truth, he is really playing a mind game with the media. In the past, the 26-year-old rapper has been rumored to be linked to numerous women such as model Milan Bertone in 2011, and Kendall Jenner in 2016. But in an unusual post from 2016 about the rumors of the two being an item, he wrote, “NOT POSSIBLE, WE’RE BOTH GAY.” A year earlier, he also tweeted a message that people are going back to:

He has a complicated history with sexuality in the media. He was chastised for promoting homophobia by using a derogatory word 213 times on his debut album, but he also outright supported the LGBTQ community by wearing supportive merchandise at concerts and standing by Frank Ocean when he announced his bisexuality in 2012. But lyrics on his latest album are making fans dig in to find out who is the guy he is talking about. Some have suspected someone named Wyatt, building theories around various tweets the rapper made earlier this year.

Until Tyler makes an official statement about the lyrics and posts over the years that suggest he is gay or bisexual, no confirmations can be made. But is he single? That is another question fans are going crazy trying to find out. He’s been posting random pictures on Instagram (@feliciathegoat) with a ring on his finger, but again, no official statements have been made about an engagement or a wedding that occurred. It looks like he might be enjoying the turmoil he’s putting his curious fans through about his sexuality–or maybe he’s simply doing what he’s always done: Produce shock value content. Until a statement is made, the rumors will remain unconfirmed!