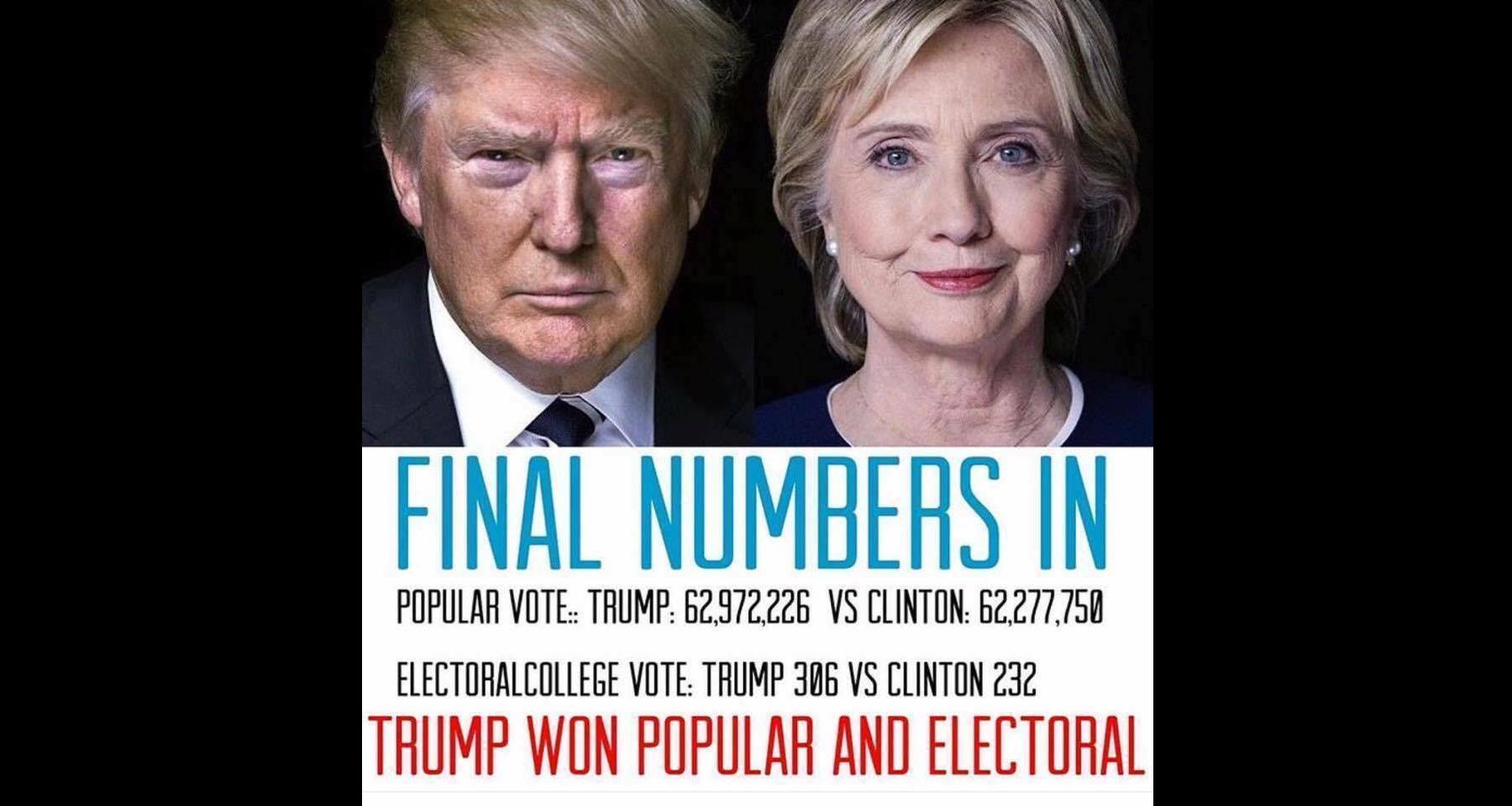 Donald Trump won the popular vote in the 2016 presidential elections.

A Facebook post claims that Donald Trump is the real winner of the popular vote in the 2016 elections, a point that has been argued since the election occurred. While Trump won the electoral votes and was sworn in as president, his opponent, Hillary Clinton, won the popular vote. Since winning, Trump and his supporters have alleged that Clinton won because of illegal votes by non-citizens. And this Facebook post appears to support that claim. However, there’s a lack of evidence to support that Trump won the popular vote after subtracting the alleged illegal votes.

A Facebook post by Uncle Sam’s Misguided Children claims that Trump won the popular and electoral college votes in 2016. It cites sources stating that millions of non-citizens cast illegal ballots in the American elections, a claim Trump and his supporters have made a few times before.

A little refresher, President Trump won 304 electoral votes to clinch the presidency. However, Hillary Clinton won the 2016 election popular vote by almost 2.9 million votes, the largest popular vote margin of any losing presidential candidate in U.S. elections history. President Trump is the fifth person in U.S. history to win the electoral college votes even though he lost the popular vote.

In his most recent press address with Russian President Vladimir Putin, President Trump claims he managed the feat of winning the election despite the fact that “the Electoral College is much more advantageous for Democrats, as you know, than it is to Republicans.”

However, if one were to eliminate the illegal ballots, would Trump win the popular elections?

That can hardly be claimed.

An analysis by The Washington Post even estimated that Trump’s claims of non-citizen voting are in the millions and that the near three-million margin in the popular vote is not adding up. So, it casts doubt on Trump’s Electoral College votes, too. 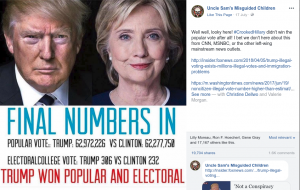 Was There Illegal Voting in the Elections?

Trump, in his routine Twitter storms, has alleged he was robbed of a victory in the popular vote because of illegal ballots. The POTUS and his supporters have cited studies to allege that there was voter fraud in the elections.

One source alleges that there were 25 million illegal votes cast. However, the claim was propagated by Infowars, a notorious conspiracy-peddling site.

It can’t be proven that non-citizens cast illegal votes in favor of Clinton. There’s not enough research and data to confirm the exact number of ballots cast by non-American citizens.

Voting data is not easily accessible to the public, either. Trump even set up the Voter Fraud Commission under Kris Kobach to investigate non-citizen voting that cost him the popular vote.

But U.S. states refused Kobach’s request to send in personal voter information, including party IDs and last digits of their Social Security numbers. After it received backlash for federal overreach from Democrats and Republicans alike, Trump disbanded the commission.

Members of the Trump cabinet, like former White House Press Secretary Sean Spicer, have instead relied on older studies of past elections.

A 2012 report by NPR found 24 million invalid or inaccurate votes, of which 1.8 million registered voters were deceased. There is, however, no credible report on the 2016 elections yet. The news outlet also said that inaccurate votes imply the system isn’t up-to-date and should not be relied on as evidence of voter fraud.

Political analysts acknowledge that non-citizen voting does happen. But the size is not enough to have an impact.

“The problem of noncitizen voting is quite small—like we’re talking claims in the dozens, we’re not talking voting in the millions, or the thousands, or even the hundreds.,” said Rick Hasen, a University of California, Irvine professor specializing in election law.

A report by The Washington Times which was also cited by the Facebook post, mentions a study that claims that over five million non-citizens voted for Obama in 2008. While Trump alleges that Clinton also received five million illegal votes, his estimate is a far cry from the research by Old Dominion University in Norfolk, Virginia, which states that Clinton received approximately 834,381 non-citizen votes.

The Facebook post also attached links to reports alleging illegal ballots in the presidential elections. They are, however, not easily verifiable reports.

One of the sources is a statement made on the website, True the Vote, which reads, “True the Vote absolutely supports President-elect Trump’s recent comment about the impact of illegal voting, as reflected in the national popular vote.”