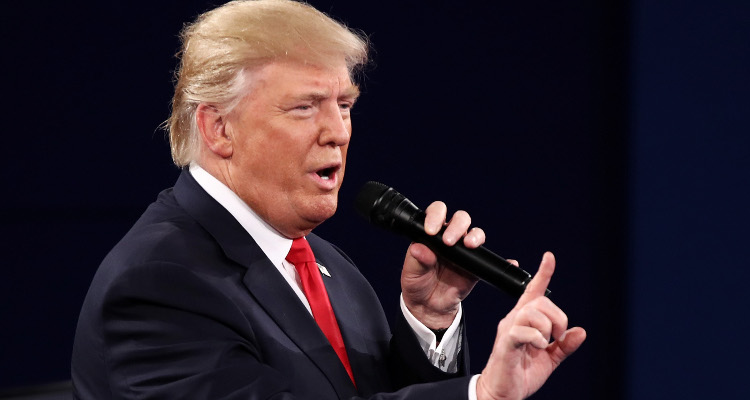 Donald Trump is at it again! The 70-year-old presidential candidate can’t seem to control himself, especially when it comes to making disparaging comments about women. The real-estate mogul came under fire recently, after a video was leaked on the Internet in which he was clearly heard bragging about his sexual conquests. The video, which dates back to 2005, recorded Trump on a live microphone passing lewd comments about groping and kissing women. Since then, shocked voters have been searching the Internet to learn what Trump said about women, after the leaked audio surfaced online, barely two days before the second presidential debate!

We’ve compiled a list of the five most outrageous comments Donald Trump has made regarding women, including his remarks on well-known TV personalities and celebrities:

In the leaked footage that came to light on Friday (October 7) courtesy The Washington Post, Trump was overheard telling Access Hollywood host, Billy Bush, “I moved on her, and I failed. I’ll admit it. I did try and f**k her. She was married.” The duo was arriving by bus to the set of Days of Our Lives, in which Trump had a short cameo. The conversation took place many months after Trump’s third marriage to Slovenian-born model, Melania Knauss, who is 24 years younger than him.

The horrifying exchange continued in a similar vein, with Trump commenting on actress, Arianne Zucker as they reached the set of the soap opera. He called her “hot as s**t,” and admitted, “I’ve got to use some Tic Tacs, just in case I start kissing her. You know I’m automatically attracted to beautiful—I just start kissing them. It’s like a magnet. Just kiss. I don’t even wait.”

Naturally, the video created an uproar with many voters withdrawing their support of the billionaire Republican presidential nominee Donald Trump and his Vice-Presidential running mate Mike Pence. Millions of women across America drew offense at the overtly sexual remarks from the grandfather of eight, especially when he proudly bragged, “And when you’re a star, they let you do it. You can do anything. Grab them by the p***y.”

Trump and comedian, Rosie O’Donnell have a long history of mutual hatred, and keep going at each others throats. The most well-documented feud between the two was in 2006, when Trump gave an interview on Entertainment Tonight and stated, “Rosie O’Donnell is disgusting, both inside and out. If you take a look at her, she’s a slob. How does she even get on television?” He went so far as to say that she had a “fat, ugly face,” and was an “unattractive person.” The entrepreneur also passed offensive remarks on her sexuality and love life, drawing criticism from the LGBTQ community.

#3 On Megyn Kelly: “There was blood coming out of her…wherever.”

After the first Republican presidential debate in 2015, hosted by journalist Megyn Kelly, Trump denounced the respected reporter on Twitter. He called her a “bimbo,” for asking him hard-hitting questions regarding his treatment of women. In an interview with CNN, Trump also insinuated that Kelly was menstruating by stating that, “You could see there was blood coming out of her eyes, lood coming out of her wherever.”

#4 On Ivanka Trump: “If Ivanka weren’t my daughter, perhaps I’d be dating her.”

In an interview he gave on The View in 2006, Trump appeared with his daughter from his first wife, Ivanka and casually remarked that he would have no qualms dating her, if she wasn’t his daughter.

[email protected] is unattractive both inside and out. I fully understand why her former husband left her for a man—he made a good decision.

In the past, Trump has gone after the Huffington Post editor and co-founder, Arianna Huffington. He blasted her on Twitter, making jabs at her looks and her divorce, and cruelly joking about her ex-husband leaving her for a man. Ouch!

How much money is the  extremely unattractive (both inside and out) Arianna Huffington paying her poor ex-hubby for the use of his name?