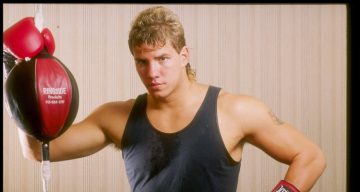 ESPN compiled a profile of the late Tommy Morrison for their 30 for 30 documentary. Dubbed  Tommy, the documentary will focus on the heavyweight boxing champion most famous for his role in Rocky V.

Heavyweight boxing champion, Tommy Morrison had a compelling rise to stardom pushed by his starring role in opposite Sylvester Stallone in Rocky V. But then came the tragic fall which ended with his death. The last years of Tommy Morrison’s life was a battle with his AIDS diagnosis. Find out about the late boxer’s rise and tragic fall in Tommy Morrison’s wiki.

The Arkansas-born Morrison was raised by his parents in Oklahoma where he was called “The Duke” because of his family relations to John Wayne. His older brother, Tim Jr. was a boxer and their father urged 10-year-old Tommy to pick up the sport.

His family was one of a kind. His mother got him his first tattoo, and his father took him to a strip club when he was 14. They urged him to enter toughman contests when he was in eighth grade, for which Tommy made a fake ID. He once said in an interview that he lost a toughman contest only once.

In 1988, he won the Regional Heavyweight title and advanced to the National Golden Gloves where he lost in a split decision. Not one to get down, he won the Western Olympic trials two weeks later but lost the Olympic trials to Ray Mercer, who went on to win the gold medal.

Nevertheless his amateur failures led to professional success. He scored first-round knockout wins at the start of professional boxing career. By 1989, he had 19 wins and zero losses, 15 by knockout. After going undefeated, he suffered the first loss of his career in 1991 against Ray Mercer. But he redeemed himself and won the WBO title two years later in a close bout against the legendary George Foreman. In his professional career, he lost only three bouts out of 52.

Sylvester Stallone is best known for his Rocky franchise which has become a classic. It was after the success of the first four films, when Stallone was at one of Morrison’s bouts. The young undefeated boxer caught Stallone’s eye, and the actor called him for a script reading. Soon, he was cast as Tommy “The Machine” Gunn, Rocky Balboa’s young and talented protégé.

It was actually Stallone’s brother, Frank, who discovered the young boxer. “Sly was doing a big casting call for Rocky V, and he had guys who maybe could fight, but can’t act. He needed someone who was age appropriate. Tommy fit that bill,” said Frank. He shares his story about Morrison in the 30 for 30 documentary.

Trouble Outside the Ropes

Morrison’s career started declining until it was cut short after he tested positive for HIV in 1996. He was forced to retire and from then on it was a tragic story outside of the ropes. His net worth is estimated at $10,000. It was probably impacted by his failed attempts to make a comeback in the ring and his multiple arrests.

In 1996, a 27-year-old Morrison was in Las Vegas, reveling in his new $38.5 million contract. An hour later, he was informed by his family that he tested positive for HIV in a pre-fight medical. His manager was trying to get him a bout against Mike Tyson which would have been the match of a lifetime. But after the diagnosis, Morrison’s boxing career ended.

For a long time, he was in denial over his diagnosis which became his hamartia, or tragic flaw. The stereotype about AIDS being a “gay disease” was rampant and very few heterosexual males were known to have it. One of the most famous HIV-positive men back then was retired NBA player-turned-AIDS activist, Magic Johnson.

Morrison’s moments of delusion became a hot topic. In his opinion, the medical test wrongly diagnosed him. He believed he had hepatitis, tried to make a comeback after claiming he was cured, and briefly thought HIV didn’t exist and that his failed test was a government conspiracy. He was nothing without boxing and made all sorts of claims so he could return to the sport. In his delusions, he became nonsensical, even claiming the world would end in 2000.

“I’ll trust an attorney before I’ll trust a doctor,” he once said. “I will lay down and die before I take any drugs,” he said another time. He ceased taking his HIV medication and his family staged an intervention to get him back on it. They tried to persuade him a contaminated needle from the days he used steroids gave him HIV. Even Magic Johnson, who today still lives a long and healthy life thanks to the meds, personally tried to convince Morrison to take his medication to no avail.

His downfall came rather fast when he fell to drugs and alcohol. He was arrested for multiple DUIs, as well as drug and weapons possessions charges. Morrison and Stallone had a falling out by then, and his plans to pursue acting were derailed.

Morrison had an infamously promiscuous lifestyle which he admitted after contracting HIV. He had so many relationships, the media stopped keeping count of his women. At one point, he was married to two women, Dawn Freeman and Dawn Gilbert, at the same time. By 19, Morrison already had two sons. He did not have children with his last wife, Trisha Harding.

His third career loss to Lennox Lewis cost him $7.5 million. The loss was attributed to Morrison spending more time with women instead of training camp. Since his HIV diagnosis, several women claimed they had unprotected sex with him. His wife, Trisha denied that he was ever HIV positive, believing his death was caused by respiratory problems. She said he contacted Miller Fisher syndrome after a botched surgery to remove pectoral implants.

In his last years, his mother said that his AIDS was in its final stages and he was completely bedridden. He passed away in September 2013, at the age of 44. His cause of death was reported to be cardiac arrest as a result of multi-organ failure. He reportedly went into septic shock caused by Pseudomonas aeruginosa infection.