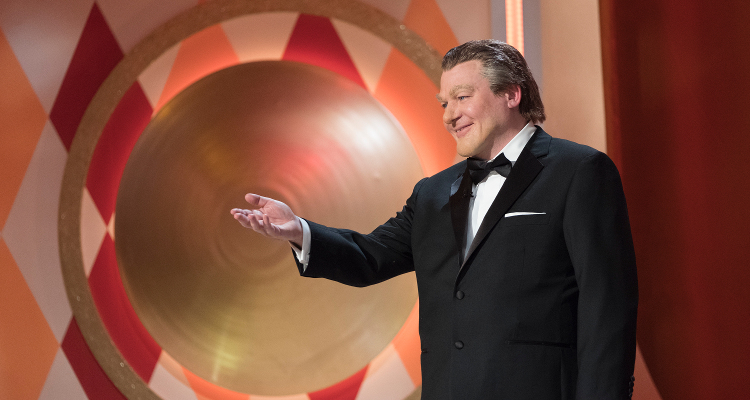 The Gong Show is back thanks to Will Arnett, who also brought in British comedian, Tommy Maitland. But why does Maitland look so familiar? Like a certain Mike Myers who is known for chameleon-like transformations?

The irreverent and entertaining hit talent show of the ‘70s, The Gong Show is back in 2017. Who is the host of the new Gong Show? The show has changed hosts over the years during its first run and in 2017, actor-turned-producer Will Arnett brought in a British comedian, Tommy Maitland. The new host hasn’t been seen in the U.S. before but he’s pretty entertaining. Yet, we can’t get past his strong likeness to Mike Myers. Did Mike Myers resurface in the weirdest way, or is Tommy Maitland real? Find out in Tommy Maitland’s wiki.

Who is Tommy Maitland?

The majority of viewers are convinced that the man hosting the 2017 revival of The Gong Show is a Mike Myers character. The man has a long history of transforming himself during his career and has often played British characters, who sound a little like Tommy Maitland. Austin Powers is British, General Ed Fenech (Inglourious Basterds) and Myers embodied a British finishing instructor for a short Oscars movie.

ABC has gone to great lengths to make Tommy Maitland seem like a real character. They made him a bio that states he was born in July 1944. So he is way older than Myers’ 54.

“Thomas Winston Maitland (his middle name is a tribute to Winston Churchill) grew up in Neasden, GLC, Borough of Brent, where his father was an actuary and in the Merchant Marine and his mother was in the RAF,” the bio reads. He failed as a pipe fitter’s apprentice and joined the British Army at the age of 15.

After his stint in the army, Maitland joined the Entertainment National Service Association (ENSA), where he got to know some of the U.K.’s biggest comedians. He told jokes, played the ukulele and drummed badly until he landed a hosting gig. He was voted ENSA Entertainer of the Year through which he appeared on the radio show The Whosey Whats.

He got small roles in films and wrote a book about his time in the British Army called The Mau Maus are Revolting. Maitland is very popular in Italy where he made 11 films —two of which were James Bond knockoffs (sounds like Austin Powers).

Serendipity? We Think Not

Will Arnett knew of the British comedian through a Canadian TV show in the ’80s. It was at that time that Maitland bought a property in Kent called Serendipity. As luck would have it, he found it by accident! “Serendipity was a mega-celebrity hangout where people could escape, party, do or be anything they wanted to be, free from judgment and the prying eyes of the paparazzi.”

After more hosting game shows, he retired at the age of 55, but continued to perform with ENSA. When he was in Edinburgh for a standup show, Will Arnett contacted him. He was a fan of Maitland’s and wanted him to host The Gong Show.

Now on to the Best Part

There are very convincing parallels between the British comedian and Mike Myers. Maitland’s Twitter page is only just picking up many followers, but the cat is out of the bag ABC. It’s clear that underneath the accent and prosthetics is Mike Myers.

Many who watched The Gong Show last night may not know that it was as big as America’s Got Talent back in the day. And they might not know that Mike Myers was the biggest comedian in the ‘90s. Whether it is for SNL or So I Married an Ax Murderer, Myers goes deep into character.

Though Canadian, Myers tends to play British and Scottish characters. His parents are English-born and he has a Scottish lineage too. Thanks to his father, he grew up watching British comedy.

Laden with new phrases like “You’ve got no proof,” it’s not hard to decode why Myers is so into a creating a fictional persona for a new game show. It’s great fun, and people love it. He’s even going to interviews as Maitland! But we’re not complaining.