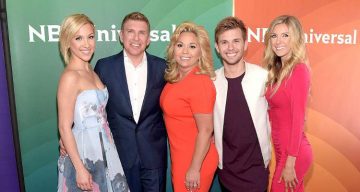 Season 6 of Chrisley Knows Best is set to premiere this spring! Todd Chrisley and his family welcomed America into their home back in 2014, and the reality show went on to become a hit. As a new season comes calling soon, let’s take a closer look at Todd Chrisley’s children. So, how many kids does Todd Chrisley have? Keep reading to find out!

When it comes to drama, the Chrisleys never disappoint! The past five seasons had family drama as a running theme. And fans can expect the same to continue in the new season of the show.

Todd Chrisley has a contentious relationship with some of his kids. And one of Todd Chrisley’s children, his son Kyle Chrisley, had even accused his father of being a “snake.”

We have everything you need to know about Todd Chrisley’s kids right here.

Kyle Chrisley is Todd Chrisley and ex-wife Teresa Terry’s son. Chrisley has a troubled relationship with his son, who accused his dad of being toxic and a “snake” in an interview with the Daily Mail in 2014. Kyle Chrisley stopped appearing on the show after the first season.

Currently estranged from his family, Kyle Chrisley has battled drug addiction in the past. But now, Chrisley claims that he is sober and trying to rebuild his life.

Chrisley has a young daughter named Chloe Chrisley. Todd Chrisley and his wife, Julie Chrisley, have taken custody of their son’s daughter because they claim that he is not fit to be a parent.

After missing in the previous two seasons, Chloe Chrisley was back in the 2017 Christmas special. And she will be a regular in season 6 of Chrisley Knows Best, according to reports.

In an interview with Us Weekly, Todd Chrisley said, “Chloe is our family, and we are glad that the world gets to see such a beautiful child grow, explore and come into herself so brilliantly through love and respect.”

Todd Chrisley’s daughter from his previous marriage, Lindsie Chrisley, wasn’t seen much on the show. She eloped and got married when she was 19 against her parents’ wishes. Unfortunately, the couple separated in August 2016.

• secret safe with me • ?:@hayleypethelphotography

Lindsie Chrisley has a young son named Jackson Campbell with her former husband, Will Campbell. Rumors are floating around that the couple has reunited.

Fans have watched Chase Chrisley’s teenage drama on the show. And they especially enjoy his get-rich-quick schemes with his friend, Parker!

We love watching the sweet relationship Chrisley shares with his sister, Savannah Chrisley. This season will also focus on the insecurities he faces in his relationships.

The family’s beauty pageant competitor, Savannah Chrisley, is in a relationship with hockey star Nic Kerdiles.

And you sir @nickerdiles …you’re very attractive. Therefore, I will stare at you ? until you do something that makes me laugh uncontrollably haha #lovinglife #sundayfunday

Chrisley was previously in a relationship with NBA player Luke Kennard. But they split in August 2017 after dating for four months.

Savannah Chrisley went on to say that it was “best to part as friends rather than deal with the pressures of wondering if you are the only one.”

“I’m 20 now and so excited to live my life as beautifully as God intended,” Chrisley added.

The 20-year-old reality star was in a motor vehicle accident in January 2017 and broke her vertebrae. But that hasn’t kept her away from the limelight!

Grayson Chrisley is Todd Chrisley’s youngest kid. As the youngest sibling, he uses his charm to get his way most of the time!

This kid and his basketball all day everyday , I’m blessed God allows me to be present in everything @graysonchrisley does..

The 10-year-old received his first phone when he was only four-years-old. And, he is apparently the worst liar!

With over 90,000 followers, this kid is very popular on Instagram! His last post may have been uploaded over a year ago, but Grayson Chrisley already has a huge fan following!