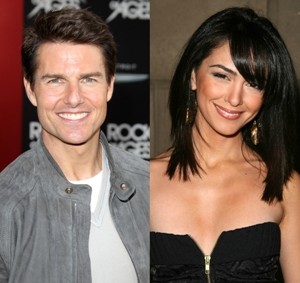 The Church of Scientology has continued to maintain their statement that there was never a secret project put into place to find Tom Cruise a young, suitable wife. However, various reports are telling a very different story.

Actress Nazanin Boniadi recently made her debut on the award-winning series Homeland, but a lot of people are still remembering her as the young woman who briefly dated Cruise before he married Holmes—Boniadi was reportedly aggressively vetted by the church to marry Cruise, who is an avid follower of the controversial faith.

In Vanity Fair, sources claimed that Boniadi dated Cruise for about two months. At first, the celebrity couple’s May-December relationship was going well, even with the 20-year age difference between them. In the second month of their relationship, things started going downhill, and fast. Boniadi, who was a practicing Scientologist at the time, was allegedly put through an extremely vigorous screening process in order for the church to determine whether or not she was suitable enough to be Cruise’s wife. According to the in-depth article, the young woman was interviewed in detail about her sex life, forced to change her hair color, and asked to have her teeth filed down.

The article goes on to explain how Boniadi was sent to a Scientology center after the celebrity couple broke up. After revealing to a friend about what happened while she was dating Cruise, her “friend” reported her to the elder members of the church, who punished her by making her scrub floors and toilets.

A few months after Cruise and Boniadi broke up, he started dating Katie Holmes, who must have been deemed worthy by the church of Scientology because she became his wife shortly after. Meanwhile, Boniadi never admitted or denied the reports, but she did end up leaving the church a few years later and even participated in an anti-Scientology video.

What do you think: Would you let religion stand in the way of your relationship?