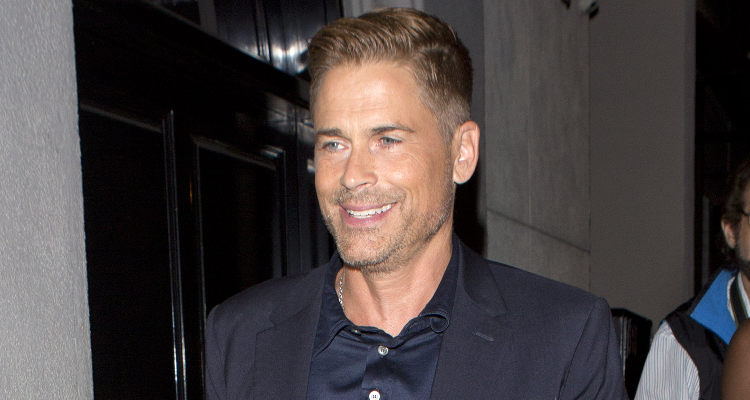 Rob Lowe has had a storied career, to say the least, and it shows in his $30 million net worth. The actor  as appeared throughout TV and film in a variety of series and genres, so much so that his current stint as the star of The Grinder almost seems like a layover rather than any sort of destination.

Robert Hepler Lowe was born in Charlottesville, Virginia on March 17, 1964. Lowe lived a rather normal life, outside of being deaf in one ear due to a virus he contracted as an infant—oh, and he went to high school with Robert Downey Jr., Sean Peen, Charlie Sheen, Holly Robinson, and Emilio Estevez. But otherwise, completely uneventful.

Entering the acting profession in the ’80s, Lowe received his first Golden Globe nomination in 1983 for Best Supporting Actor in a Series, Miniseries, or Television Film for the direct-to-TV film Thursday’s Child, which was his first “real” role. Appearing in other, similar films over the decade, Lowe would be seen as part of the “Brat Pack,” a group of young actors who regularly appeared together in teenage-centric films, most notably 1985’s St. Elmo’s Fire and The Breakfast Club (though Lowe was only in the former). Such roles meant his increasing net worth was coming from a fan base that, at the time, was primarily made up of lovesick young girls.

In 1987, Rob Lowe received a second Golden Globe nomination, this time for Best Supporting Actor, for his role as a mentally disabled man in the movie Square Dance. This year also saw his first time performing on stage, appearing in a rendition of Chekov’s The Three Sisters. However, following this, a scandal erupted regarding Lowe and an underage female, forcing the actor out of the spotlight for several years, as he wanted for the scandal (which involved a sex tape) to die down. While this hurt his net worth significantly, his continued presence in the media today clearly shows that he has since recovered.

A Return to Television

Lowe spent the 1990s slowly reintegrating himself back into the public eye with minor film appearances. But his true return in 1999 came not from film, but television, as Lowe would play one of the lead characters, White House Deputy Communications Director Sam Seaborn, in The West Wing for the first four seasons. He left the show in 2002 due to contract disputes, later returning for some appearances at the end of the show’s seventh and final season. Regardless, the show boosted Rob Lowe’s net worth considerably and won him a Primetime Emmy, along with two more Golden Globe nominations.

Following his departure from The West Wing, Lowe attempted to star in and executive produce two new shows, The Lyon’s Den and Dr. Vegas, but both were quickly cancelled. This combined with several other bombs and a successful-but-still-a-step-down return to a TV miniseries hurt Lowe’s star power and value. He briefly returned to TV to prosper again with 2006’s Brothers & Sisters, but he again felt dissatisfaction following the fourth season and left the show.

In recent years, Lowe has seemed to have begun a sort of resurgence. In 2010, he became a regular cast member on the hit show Parks and Recreation, leaving midway through season six and returning for the series finale. He’s also begun to take on more voice acting roles, including the main character of Comedy Central’s Moonbeam City and The Lion King’s titular Simba in Disney’s new animated series The Lion Guard. But his most notable recent role is that of Dean Sanderson, Jr. on Fox’s new hit comedy The Grinder, which has even earned him two more Golden Globe nominations (which, also again, he unfortunately didn’t win).

Besides his storied career, Rob Lowe has a few minor additional sources of income, including two books, a memoir he wrote in 2001 titled Stories I Only Tell My Friends, and a general collection of stories called Love Life that was published in 2014. Last year, Lowe launched Profile 4 Men, a line of skin care products designed for men; this year, he plans to extend the line to include a collection of fragrances. Lowe has also made additional funds from selling two previous properties, getting $7.6 million in 2009 for his home in Montecito, California and $5.9 million for his Santa Barbara residence in 2012.

Rob Lowe is currently enjoying his life and career and has many roles ahead of him. So while he’s probably too busy harassing Democratic Presidential candidate Bernie Sanders to really care about his finances, fans can rest easy: Rob Lowe’s net worth, like everything else in his life, is currently on the upswing.