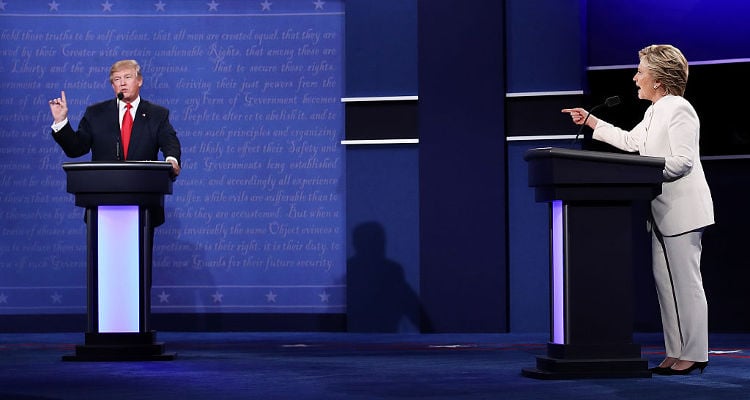 The final presidential debate took place last night. Did Hillary Clinton keep her lead, or did Donald Trump make a leap in the polls? Here’s what the post debate results say.

The third presidential debate took place tonight at the University of Nevada, Las Vegas. Moderator Chris Wallace posed questions about foreign policy, immigration, the Supreme Court, and other issues to the Democratic nominee, Hillary Clinton, and Republican nominee, Donald Trump. The live poll results are in! Who is winning the post-debate polls? Read the following analysis of the poll results to find out.


Who is Winning the Post-Debate Polls?

According to recent polling, Clinton is holding on to her lead. The Secretary of State had a nine-point lead over Trump just before the third debate. According to CNN, Clinton was leading 47% over Trump’s 38%. She was able to maintain her lead in the immediate post-debate polls, and already has a lead in the three battleground states.

The CNN/ORC poll says Clinton won the final debate with 52% of voters supporting her, and 39% supporting Trump, with a four percent margin of error. The sample of debate-watchers was 36% Democratic and 29% Republican. Debate watchers claimed that both candidates’ performances improved but Trump outperformed expectations.

Several polls have shown that Donald Trump has significantly improved in figures. In the time between the second and third debates, the gap in the polls between the two candidates has gone from double digits to single digits. However, his poll figures are directly proportional to the percentage of his supporters. As such, his chances of catching up to Clinton, who has been able to get support from undecided voters, is extremely narrow.

Tonight was Trump’s best presidential debate yet. Economy, emails, and Benghazi are things that could put Clinton on the defence, and are issues that Trump has often brought up in the previous debates. However, his arguments faltered, as Clinton was able to defend her views. Trump did, however, manage to slightly tone down his typical unrestrained style, in order to emphasize his points.

Nevertheless, his arguments were phrased as personal attacks against Clinton, as she discussed her policies. He even closed the debate by calling Clinton a “nasty woman.” This just adds to the growing list of comments by Trump intended to demean women.

There’s also a sagging support base for the Trump campaign, mostly from the backlash of his “locker room” video, but also because of the Republican candidate claiming that the U.S. presidential elections are being rigged in Clinton’s favor. His party, running mate Mike Pence, and even President Obama, have commented on Trump’s allegations. Clinton also took a jab at Trump for tweeting that Emmy Awards were rigged, because his show, The Apprentice, didn’t win, despite being nominated.

Clinton fumbled when Trump brought up the Clinton Foundation, and immigration, but managed to drive Trump in a corner over his close ties with Russia. Together, moderator Chris Wallace and Clinton were able to make Trump answer whether or not he would condemn Russia, if they are found guilty of hacking into government servers. Trump admitted that he would.

Despite the 6-9 point difference, and Trump’s slight improvement, we have to remember it’s a four-way race. Libertarian candidate Gary Johnson is at seven percent while the polls gave Green Party’s Jill Stein a measly two percent. These two candidates nevertheless occupy an unwavering vote-share, that Trump can’t secure to catch up to Clinton. Voters could can go any way before the November 8 election.