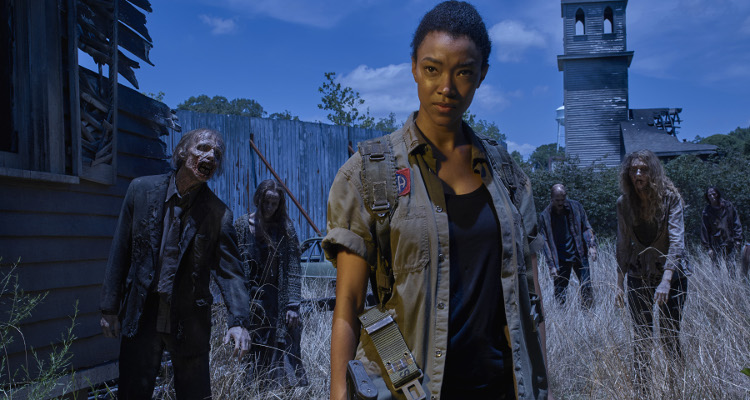 The Walking Dead season 7, episode 4 was a 90-minute special of Negan’s rule of Alexandria. For those who haven’t watched the latest episode yet, consider this an heads up because this piece contains some spoilers!

Negan is back in Alexandria with the Saviors in The Walking Dead s07e04. At the very end of the episode, Michonne sees something that upsets her and leaves viewers worried and curious. What was burning at the end of The Walking Dead season 7 episode 4? Here’s a little insight into last night’s 90-minute special, but be warned, it contains a few spoilers.

What Happened in TWD Season 7, Episode 4?

TWD season 7, episode 4 titled “Service,” shows Negan (Jeffrey Dean Morgan) and the Saviors arriving at Alexandria earlier than expected to rattle the grieving survivors. He bangs Lucille against the gate shouting “Little pig, little pig, let me in.” From that moment it’s clear that Negan is looking to terrorize some people.

We see Daryl (Norman Reedus) broken from the physical and mental torture he was subjected to in the Sanctuary. He’s now reduced to a mindless obedient servant, who Negan equates to a dog.

While Negan is bringing terror to the people in Alexandria, Rick (Andrew Lincoln) is having his own problems. He has just been declared the leader of Alexandria, but, much like Daryl, has been broken by Negan, resulting in him rolling over with one sentence from the leader of the Saviors. A helpless Rick tells the people that Alexandria will now work under Negan’s terms.

Rick doesn’t want anyone to be hurt, and he’s also scared for his son Carl’s (Chandler Riggs) life. When Negan finds a couple of guns missing in the inventory, Rick gets frantic and begins searching for them. He chastises Spencer (Austin Nichols) for taking them, and for hoarding more items underneath the floorboards.

While Negan and the Saviors are facing off with the few rebellious survivors in Alexandria (including Rick’s son), Rosita (Christian Serratos) finds a bullet from Negan’s stray shell casing. She keeps it close, waiting for the opportune moment.

What was Burning at the End of The Walking Dead?

At the end of the episode, Michonne (Christian Serratos) comes across something burning, which makes her upset. What are those things burning that Michonne sees? It’s a stack of burning mattresses.

Negan took people’s furniture, medicine, and weapons for himself. Michonne tries to talk to Rick so he could see the tragedy that is their new lives and get him to do something about it. The morning after their talk, Michonne returns to the straw field and discovers that Negan didn’t take anything. Instead, he set them ablaze. Negan and gang never needed anything from Alexandria in the first place. It was Negan’s ploy to psychologically torture the residents, and break them.

The Walking Dead airs every Sunday at 9:00 p.m. EST on AMC. Tune in, or watch TWD online on the network’s website.