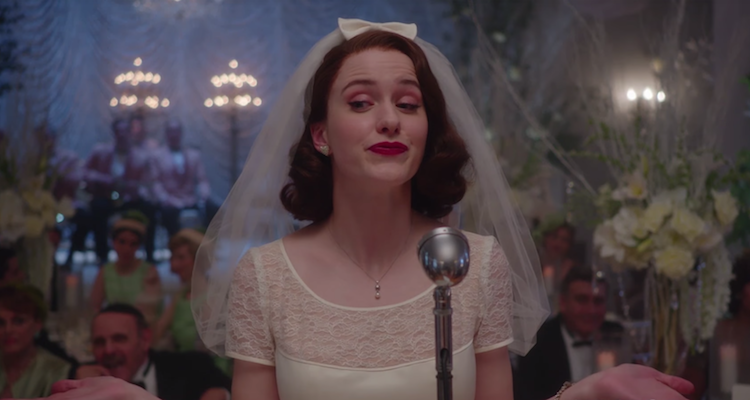 The Basics of Mrs. Maisel

The Marvelous Mrs. Maisel follows the story of Miriam “Midge” Maisel (played by Rachel Brosnahan) in 1958. She’s had a perfect life. Her husband, Joel (Michael Zegen) is a successful businessman who started doing comedy on the side. Midge was helping Joel with his set until the night he bombs by ripping off an old Bob Newhart bit, and tells Midge that he’s been having an affair with his secretary and is leaving her. Midge proceeds to get drunk, goes up on stage, turns her story into an impromptu set, and ends it by bearing her breasts and getting arrested. While this is happening, she meets legendary comic Lenny Bruce, who is also being arrested, and ends up accidentally encouraging Midge’s new career aspirations as a stand up comic.

The Marvelous Mrs. Maisel comes to us from the mind of Amy Sherman-Palladino, who served as a story editor and writer Rosanne but is best known for a little show called Gilmore Girls, one of the first shows to return after being off the air for years. When watching Mrs. Maisel, you can’t help but notice the dialogue style that has become one of Sherman-Palladino’s trademarks. She brings with her her producer husband, Daniel Palladino, who also worked on Gilmore Girls, as well as a very different television hit, Family Guy. The pilot for The Marvelous Mrs. Maisel actually aired last year to huge success with viewers and critics alike. Amazon was impressed enough to pick the show up for two seasons.

I Know That Actor!

One of the masterstrokes of Mrs. Maisel is its casting. The show is filled with actors that you recognize almost instantly. Midge’s dad is played by veteran actor Tony Shalhoub, best known for his starring role on Monk for eight seasons. Her mother is played by Marin Hinkle, who you probably recognize from Two and a Half Men. Rounding out the cast is Midge’s new friend, Susie Myerson, played by Alex Borstein, who you may recognize from HBO’s Getting On, but more than likely it will be her voice that rings a bell, as she voiced Lois Griffin for 16 seasons on Fox’s Family Guy. These actors are not only great at their craft but bring a small sense of familiarity to The Marvelous Mrs. Maisel.

When Can I See The Marvelous Mrs. Maisel?