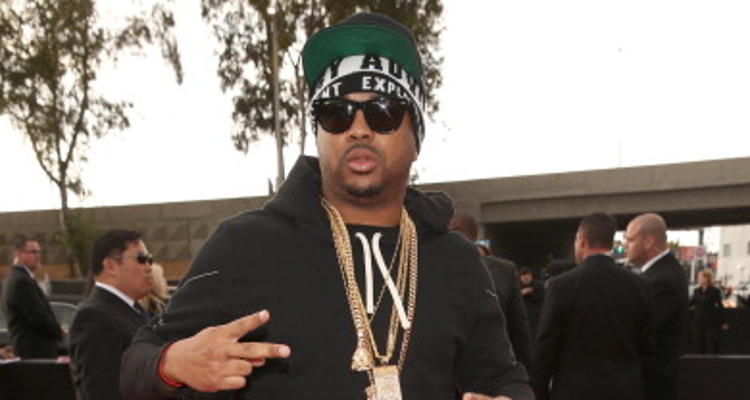 The-Dream is no ordinary fella, and he’s raking in a lot of moolah thanks to his talent. The singer and producer makes music that undoubtedly tops charts. He is a visionary whose connection to music is like no other. He is associated with so many big names that The-Dream’s net worth might be surprising. If you are wondering exactly how rich The-Dream is, you should know he’s worth a skyrocketing $10.0 million. Read on to know all about The-Dream’s life and music.

The-Dream is a singer-songwriter and boy does he know music! He wrote for so many stars, and gave the world so many hit songs that no matter how much you praise him, it would never suffice! The-Dream’s net worth in 2017 is $10.0 million and counting. The musician has recently worked with TY Dolla Sign and Lil Wayne on their new song “Love You Better,” and it’s already picking up steam. Well, you can’t expect anything less from The-Dream. If you’re a fan, then keep reading to know about the amazing musician.

Before “The Dream” Came True

The-Dream was born Terius Youngdell Nash on September 20, 1977, in Rockingham, North Carolina. The now 40-year-old musician moved to Atlanta, Georgia with his mother when he was two. His love for music did not take much time to surface, as it started in elementary school when he began learning how to play the trumpet. There was no stopping Nash after this, as he went on to play the drums and guitar as well.

He went to West Fulton High School in Atlanta, and his mother passed away when he was 15 years old.

The tragedy gave Nash a new look on life, and he expressed them through his music. His mother’s passing made Nash have a certain ardor for women, and he gives it credit for being able to majorly focus on women empowerment in his songs. Nash was then taken in by his grandfather, who worked as a mason, and raised the boy with the discipline and morals that a young man needs. The strong roots during childhood are what made Nash the success he is today.

The-Dream against the Odds

The musical journey of Nash is simply impressive, and began with none other than B2K. In 2001, he wrote the song “Everything” for their album Pandemonium after which he met with producer Laney Stewart. Nash gave himself a pen name, The-Dream, and began writing songs like Britney Spears’ “Me against the Music” and Rihanna’s 2007 hit “Umbrella.” Def Jam records saw The-Dream in its halls in 2007, when they signed a record contract for his studio album Love Hate, which featured Fabolous and Rihanna. In 2009, The-Dream released his second album, Love vs. Money, which he produced along with Trickey Stewart. The album featured the likes of Mariah Carey, Kanye West, and Lil Jon, and went on to become a commercially successful hit.

The-Dream made hits over the years like “Love King” and “Make Up Bag” in 2010. In 2013, he released IV Play featuring Big Sean, Jay-Z, Beyoncé, Pusha T, 2 Chainz, Gary Clark Jr., Kelly Rowland, and Fabolous. Now you’re talking! After the successes The-Dream saw, he was sought after by many artists. He produced for Usher, Jesse McCartney, Ciara, Diddy, and Brandy to name a few.

Navy Nash, my only princess, 8 yrs of life celebrated today! 5-10-05 Wise beyond her yrs & full of love, Thank You God for the gift of Her

The-Dream is a magnate, and it’s not uncommon for people like him to have women surrounding them. The-Dream’s wives and ex-wives are many, and he joked, “I got child support bills, I got old wives’ bills, I got new wives’ bills. I’m working on my third wife, so I gotta pay those bills.” Well, now we know where all the money goes!

He met his first wife, Nivea, in 2004 and they got married six months later. They have three children: Navy Talia, and twins London and Christian. Nivea worked with The-Dream before, and the couple fell in love and got married, but it did not last. Nivea filed for legal separation in 2007, and it was finalized in 2008.

Happy 7th Birthday My loves! Thank you for teaching me so much about life, love, and what it takes to be a Great mom! Forever I will live for you, Christian & London 🙂

In 2009, not long after his divorce, The-Dream started dating Christina Milan, and the news that she was pregnant broke out. According to Us Weekly, “the pregnancy was a surprise, but they were getting married regardless.” They got married in Las Vegas’ famous White Chapel, but it was very abrupt when The-Dream filed for a separation even before Milan could give birth to their daughter, Violet, on February 26, 2010. The divorce was finalized in October the next year after photos were leaked of The-Dream cheating on Milan with his assistant, Melissa Santiago.

He dated Lydia Nam in 2012 for a short while, and before we knew it, they were welcoming The-Dream’s fifth child. The-Dream’s baby mama spoke out that he would beat her when she was pregnant. He was arrested, and surrendered to the police. He cheated on his wife and broke up with his girlfriend to be with Nam, and those close to him say that Nam was lying about the abuse.

The-Dream is currently married to Lalonne Martinez; the couple tied the knot in 2014. They have two sons, Lord and Heir, and are now expecting their third child together, and The-Dream’s eighth child.

#TheDream & his wife #LalonneNash are expecting their third child together. ????

After so many relationships and children, it’s a good thing that The-Dream is still wealthy! He has been the source of many of the hits for years now, and regardless of his personal life, his talent gave him everything he wanted. The-Dream’s house is a lavish mansion in Atlanta, where he lives with his wife, Lalonne Nash. Here’s a breakup of The-Dream’s $10.0 million net worth: