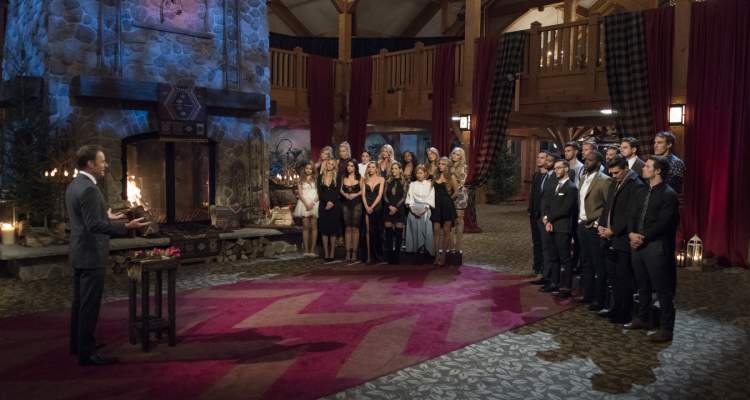 Now, we’ve got roses combined with the Olympics and The Hunger Games in The Bachelor Winter Games. And yes, we can all do with one more excuse for a viewing party.

If you’re wondering why everyone is talking about Ashley Iaconetti crying (again) and that damn fine Canadian firefighter, then you came to the right place. We’ve got you spoilers from The Bachelor Winter Games season 1, episode 1!

The BWG whisked our cast of American and international Bachelor regulars to the snowy town of Manchester in Vermont. We start off meeting the familiar faces from the U.S. version.

Ben Higgins is seen moping after his breakup with Lauren Bushnell. But he’s here, so he’s ready to move on, right?

After we just saw her ride the depression limo back home on Arie Luyendyk Jr.’s season of The Bachelor, Bibiana Julian arrived in Vermont.

Next up is Dean Unglert, who we all loved on Rachel Lindsay’s season of The Bachelorette. But he gave us mixed feelings on Bachelor in Paradise. And, he proved that he’s matured by making the toughest decision he has on TV—deciding between spaghetti and ramen.

Clare Crawley was on Juan Pablo Galavis’ The Bachelor and in Bachelor in Paradise. She didn’t have a great time in Paradise and swore not to come on the franchise again. But it looks like a drunken declaration on TV doesn’t count.

Josiah Graham, who is also from Rachel Lindsay’s season barely got any screen-time. But no one is complaining, as fans were happy to see Lindsay give him the boot last season!

Then we move on to Lesley Murphy. She was vying for Sean Lowe on The Bachelor but now has everyone’s attention since revealing she had a double mastectomy.

The pièce de résistance of all things Bachelor, Ashley Iaconetti is next. Why is she everywhere? Does she have a contract to appear in every Bachelor spin-off ever?

Maybe the producers literally keep Iaconetti around for the drama. After all, we all know the tears this woman can produce!

After we are introduced to Chris Harrison’s co-hosts (no more one-man-show, huh?), Hannah Storm and Ashley Brewer, we meet the international contestants. And how do we do that?

With an Olympic style parade, of course! However, we wish that the producers spent less on extras and more on a better marching band!

First up is Team Japan, which was led by a ninja for a mascot. Yuki was in the top 5 of The Bachelor Japan.

Yuki’s vocabulary consists of,  “Thank you,” “Okay,” “Hello,” “Goodbye,” “I love you, and “Will you marry me?” She’s adorable to boot, and we demand she has her own reality show.

Once you’re done looking up Yuki on the Internet, turn the focus on Team Canada. Kevin Wednt got engaged six months ago on The Bachelorette Canada, and he’s giving us some serious James Marsden feels. His teammate is Benoit Beauséjour-Savard, whose accent has a fanbase of its own!

Team China’s sole fighter is Zoe Tang, while the U.K. has only Laura Blair. She was the British babe who famously flipped out on The Bachelor for rejecting her! We need more of that here.

Tiffany Scanlon and Courtney Dober represent Australia, but we’re more interested in the former. She hooked up with another female contestant on her season of The Bachelor! We’re expecting she brings more than the regular drama to the franchise.

New Zealand has Ally Thompson. And she has admitted to having a sloth tattoo on her butt!

Representing Switzerland and Germany at the same is Christian Rauch. Is that even legal?

What are The Bachelor Winter Games?

The winners of the games get a date card to ask anyone in the house out. People will be sent home in Rose Ceremonies, and there’ll be two champions at the end of this.

There are some skiing and shooting events to start up the games. But before the games commence, the contestants are sizing each other up and making connections. Bibiana and Ashley zero in on Kevin, who is dubbed the “Canadian Ben Higgins.”

Finally! After 42 Seasons of The Bachelor franchise, we finally have a theme song! ? Don't miss #TheBachelorWinterGames TONIGHT at 8|7c on ABC! pic.twitter.com/RvUXc3l7vJ

Ashley I., the resident drama queen, is already emotional after Bibiana makes a connection with Kevin before her. And Josiah swooped Ally off her feet after some casual flirting. So, there’s that.

Rebecca wins in the girl’s division by a landslide no less. The guy’s finals are a little more interesting, thanks to Kevin.

Canadian Kevin gloats that he saw Nickelback in concert 27 times (as if that’s impressing all the non-Canadians). He has the advantage though because he’s worked as a ski instructor! But the real question is, why is the Nickelback fact mentioned in his stats but not the ski instructor thing?

Anyway, Kevin wins and takes Bibiana on a date. Poor Ashley cries for the first time (and definitely not the last) this season. At this point, a few sparks are flying between couples.

But who needs date cards? Back at the house, Lesley and Dean hit it off. Benoit and Clare seemed to have clicked. And, if his accent isn’t the best thing since ice cream, the guy also wears glasses. Thank you, Clare, for suggesting that he wears them more often!

Up to this point, couples are pairing up. And so far, it looks like it’s Lesley and Dean, Rebecca and Luke, Ally and Josiah, and Courtney and Lily.

Ashley is mopey, and Christian is left alone.

Cooking in the kitchen with Benoit and @Clare_Crawley! #TheBachelorWinterGames pic.twitter.com/vBTnGAOgJX

Let’s cut to the chase and get on with the Rose Ceremony. Everyone gets to plead their case at the cocktail party first.

Josiah and Ashley feel they are in danger of being voted off. And Clare confronts Christian because she heard through the grapevine that he wanted to vote her off.

Suave Christian denies that and compliments her. And boom! We have a love triangle with Clare, Christian, and Benoit!

Time to hand out some roses, y’all! Rebecca and Kevin are safe and have the duty to help Chris hand out roses. We have to admit, we don’t remember seeing some of the people getting roses in the introduction earlier.

At the end of the night, the ones leaving BWG are Zoe, Jamey, Eric, Lauren, and Laura. But, if Yuki goes, there will be bloodshed!