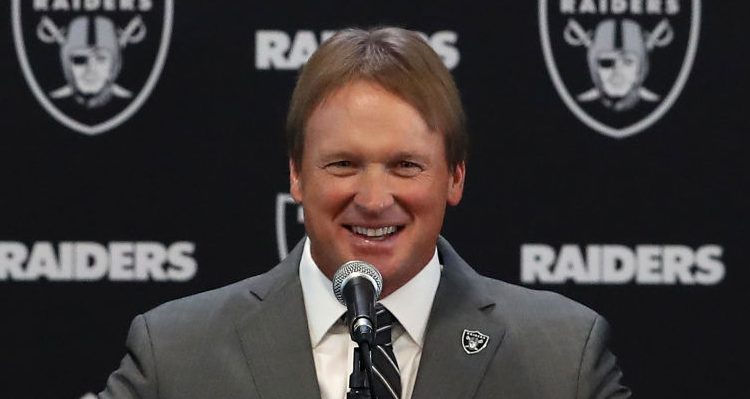 Jon Gruden is going into to the Oakland Raiders as their new coach with high expectations. He’s coached there before, but he’s been away from the game for a while. And, if the Raiders don’t do well, Gruden is most likely going to get reamed. Meanwhile, Jon Gruden’s wife can only sit back and watch and help support her husband from the slings and arrows coming his way. So, let’s take a look at the life of the woman behind the coach in our Cindy Gruden wiki below.

Cindy Gruden was born Cindy Brooks in Knoxville, Tennessee, where she was also raised. We’re not completely sure of Cindy Gruden’s age, but given that she and Jon Gruden attended university around the same time, it’s a safe bet to say that she is in her early 50s.

Jon Gruden met his future wife when she was a graduate student at the University of Tennessee. At the time, Gruden was trying to get his foot in the door of coaching by being a “gofer” for the coaches.

Cindy Gruden later told the San Fransico Chronicle, “I know I was amazed at all the parking tickets he had at Tennessee. The coaches would send him down to The Strip (Knoxville’s main drag) to get something to eat for everybody, and of course, parking was just terrible, so he’d just get a place and get a ticket. I don’t know if he ever paid all those tickets.”

But from those humble beginnings, Gruden started to get coaching jobs. But, he told his future wife that he wouldn’t marry her until he had a full-time coaching job to be able to support her and a family.

“There is unfinished business. … I’ve been traded, fired; I’ve missed coaching dearly. But I really missed the Raiders.”

That time came while Gruden worked as an offensive assistant coach for the San Francisco 49ers. He took $1,900 in cash and his wife-to-be to a jewelry store and bought a ring.

The couple got married in 1991 and now have three kids.

Gruden is fairly old school when it comes to her support for her husband’s team. So, she doesn’t take tons of pics for social media.

Cindy Gruden’s Instagram and social media are for family and friends, not the public. So, you’re not going to find many Cindy Gruden’s pics. But, she does try to rally the troops.

During her husband’s first stint with Oakland, Cindy Gruden organized the player’s wives and their families to take over the player’s training facility. This way, everyone could watch the games together with their families when the team was playing out of town.

"They ain't seen nothing yet, man."