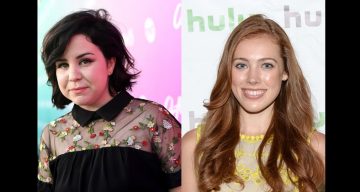 People are waiting for the new web series Overthinking with Kat & June to premiere on December 19, 2018, and nobody is more eager than the talented actresses who play Kat, Tenea Intriago, and June, Alexia Dox. Between the two of them, they’ve handled many roles in film, TV, and theater, and bring depth and weight to all the characters they play. Triago lives in Los Angeles, California, and is busy with work most of the time. And when she isn’t, she likes to spend time with her family and friends.

OH HI CUTIE POSTER. Loving all of the comments and shares that Kat & June is getting. I am so humbled and excited and giddy and I truly hope you pee your pants from laughter after binging the show. I’m just a little woman with a baby and a dog and a hubs living in New Orleans… I can’t believe this is happening. And, for the record, her hair smelled delicious. @awesomenesstv @youtube #youtubepremium #awesomenesstv #overthinkingwithkatandjune #alexiadox #teneaintriago #friendship #fun #funny #humor #women makeup by the beautiful and talented @diana_ivanov_ & @moresweettea

According to the makers of this upcoming web series, Overthinking with Kat & June is about “the birth of a strange but beautiful female friendship, the hopes, dreams, and fears—but mostly fears—of the duo are heard out loud.” Naturally, people’s curiosity has grown, and they’re asking, “Who is Kat in Overthinking with Kat & June?” We have the answer for you, right here. Here are a few facts from Tenea Intriago’s bio.

The role of Kat is played by talented character actress Tenea Intriago, who is known to play quirky roles in different mediums. Intriago has done roles in film, TV, and theater and does a fantastic job in every part, especially when she’s playing the underdog.

Intriago likes to play roles that resonate with everybody and touch their lives in some way. She has acted in TV series like Good Behavior, NCIS: New Orleans, Claws, Preacher, and Law & Order: Special Victims Unit.

She’s also appeared in several short films, like We, the Wicked,  My Hero, Fingernails, Paperfinger, and Hello My Friend, as well as a few full-length films like The Starving Games, Happy Death Day, When We First Met, and Out of Blue. Right now, Intriago is busy working on two of her upcoming movies, namely Happy Death Day 2U and Ivy, which will hit theaters in 2019.

Intriago stays in Los Angeles, California, as she is working in the city most of the time. Apart from acting, Intriago has tried her hand at direction as well and has been an assistant director for a few productions.

She Is a Serious Theater Actress

Intriago has devoted some of her time to acting in theater, and her performances have been highly praised. Some of the productions include Grace & Igor, Never Swim Alone, The Cat in the Hat, A Midsummer Night’s Dream, and You’re a Good Man Charlie Brown.

Intriago likes to keep her friends and fans abreast of what she is doing, and her Instagram account is full of pictures of her with her family, her son, her friends, her costars, and herself. There are also pictures of her costar in Overthinking with Kat & June, Alexia Dox, and the two of them can be seen having quite the good time.

Born on July 17, 1989, in Santa Clara, California, Alexia Dox’s age is 29. She plays June in the new web series Overthinking with Kat & June, and from the photos, it sure looks like the girls have great chemistry between them.

Dox is a French-American actress and writer from the small town of Saratoga, California. She graduated from the University of California, Santa Barbara’s BFA acting program and began her career in showbiz.

Both Intriago and Dox are looking forward to the premiere of their new web series Overthinking with Kat & June, which will premiere on December 19, 2018, on YouTube Premium. So, don’t forget to check out what these two girls are up to on the day of the release.