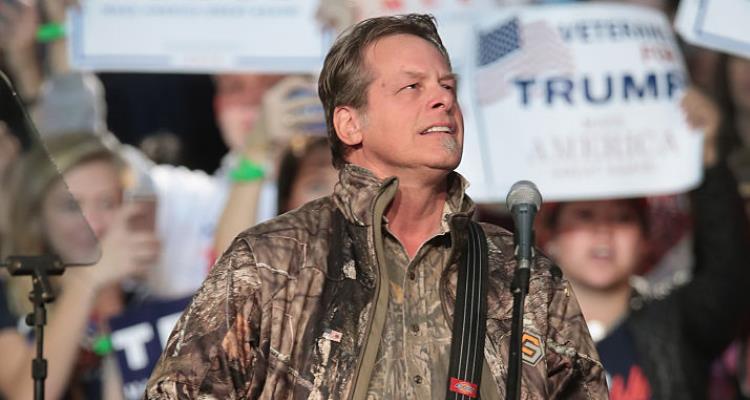 It looks like Wednesday is the best time to be at the White House this week! Most of the New England Patriots were there and apparently so was guitarist and singer, Ted Nugent. Who is Ted Nugent? For those who aren’t familiar with the controversial singer, this Ted Nugent wiki is for you!

Who is Ted Nugent?

Conservative rocker, Theodore Anthony “Ted” Nugent was born on December 13, 1948 in Detroit, Michigan and he started playing music when he was just six years old. In the 1970s, Nugent fronted the band, Amboy Dukes, before he went embarked on his solo music career.

Ted Nugent’s rapist reputation followed by Ted Nugent’s racist allegations stem from his song “Jailbait,” in which he sings about having sex with an underage girl. “Well, I don’t care if you’re just 13 / You look too good to be true” were just some of their strange lyrics. Much like Trump, Nugent is considered a controversial individual and also like the president, he’s been at the center of sexual harassment stories.

In a Crooks & Liars article, the website published many of Ted Nugent’s quotes, which denied that he was a statutory rapist or a racist.
“Before we kicked her [Democratic Texas state Sen. Wendy Davis] ass royal,” said Nugent. “Her entire campaign was attacking and lying about me, calling me a draft dodger. I’m not. Calling me a racist. I’m not. Calling me a pedophile, Ed. I’m not.”

In 1998, during a VH1 documentary, Nugent said that he had a history with young girls and from them on, he has maintained the stigma of being seen as a sexual predator.

“I was addicted to girls. It was hopeless. It was beautiful,” Nugent said at the time. “I got the stamp of approval of their parents… I guess they figured better Ted Nugent than some drug-infested punk in high school.” It was statements like this that had many labeling Nugent in a negative light and voicing their opinions on his “disgusting” lyrics about sex with underage girls.

“Pick a fantasy, pick a lie and cling to it,” he declared. “The government lies through their teeth, and I couldn’t be more proud they hate me like they do.”

In a segment of CNN’s Out Front, Ted’s brother Jeff spoke openly about how much he doesn’t agree with his brother’s views and comments. Around that time, Ted made hateful comments about then-President, Barack Obama and then-Secretary of State, Hillary Clinton. Jeff told his brother to “tone it down,” after which Jeff explained that his brother apologized and is aware that what he says offends his brother. That could explain why Ted and Trump get along so well! Trump is known to be the face of controversy and is often caught saying and doing questionable things that people don’t care for. Not just because of his job, but as a person in general.

There was a Republican party at the White House yesterday (Wednesday, April 19), but the guests weren’t all politicians. Former Alaska Governor Sarah Palin was present, along with Kid Rock and his fiancée Audrey Berry, and Ted Nugent, who also brought his wife, Shermane Nugent.

“A great night at the White House,” Palin posted on Facebook and Twitter. “Thank you to President Trump for the invite!”

In a post on Palin’s website, she joked that she invited musicians “because Jesus was booked” and said they discussed “commonsense solutions.” The group of them also posed for photos in front of a painting of Hillary Clinton, though they seem to be trolling her in the photo.

It was a busy day at the White House and who knows, maybe Ted will get a job offer from Trump himself.