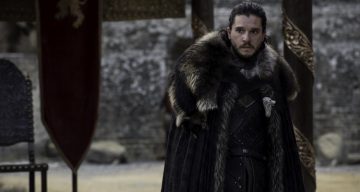 By now, pretty much everyone has seen the Game of Thrones season 7 finale, which confirmed a shocking Jon Snow theory. We know he has an interesting family lineage, and we now know just how complicated it really is! If you haven’t caught up, be warned: this piece contains spoilers!

Fans are likely still reeling from the Game of Thrones season 7 finale, but there are bigger things to discuss; one of the biggest GoT theroies just came true! Jon Snow is not Jon Snow, but still, knows nothing. Talk about frustrating! Jon and Daenerys finally made the dreams of every Throner come true, and we can all we hear Bran’s voice saying he is the rightful heir to the Iron Throne (over Jon and Dany’s sex scene no less!) How does that add up? Take a look at the very complicated family tree of House Targaryen.

House Targaryen was the ruling House of the Seven Kingdoms of Westeros for three centuries before Robert’s Rebellion. The sigil of a three-headed dragon and the words, “Fire and Blood” describe the Targaryens best. Originally Valyrians, Aegon conquered Westeros with his dragons and united the seven quarrelsome kingdoms into one, which his family ruled over. Dragonstone became the seat of House Targaryen where Daenerys Targaryen was born. Stannis Baratheon governed Dragonstone when his brother, Robert, became King.

Generations of inbreeding preserved the Valyrian blood in the Targaryens, which make them sole dragonriders. Daenerys’ parents, Aerys and Rhaella, were actually siblings. The characteristic silver hair of the family and the pale skin are said to be Valyrian features. The compound inbreeding has preserved some of their capability to resist extreme heat and fire, like Daenerys, while some don’t have that ability, like Viserys proved. The incest in the family is also said to have resulted in the family’s bizarre and erratic tendencies known as the Targaryen Madness.

Centuries after Aegon’s Landing, King Aerys II (a.k.a. the Mad King) was the last Targaryen that sat on the Iron Throne. His eldest son, Crown Prince Rhaegar, supposedly kidnapped Ned Stark’s sister, Lyanna. The Mad King killed Ned’s father and brother, which later sparked Robert Baratheon to rally the other houses against the Targaryens. Robert killed Rhaegar while Jaime Lannister killed Aerys and earned the moniker, “Kingslayer.” Rhaegar’s only known children were killed along with his wife, Elia Martell.

The Baratheon rule replaced the Targaryen dynasty while the only surviving Targaryens (Viserys and Daenerys) were rescued by loyalists. Aemon Targaryen, Aerys’ uncle, had renounced his titles and claims to serve in the Nights Watch until his death. His Watch ended when he was about 100 years old. Viserys and Dany spent their lives in exile in Essos, where Viserys sold his sister to the Dothraki lord, Khal Drogo.

Drogo was meant to lead military support to Viserys to reclaim the Iron Throne, which he then promised to Dany after he killed Viserys. But Drogo dies when Dany gives birth to their stillborn child. Dany’s dragons are born from fossilized dragon eggs when she walks into Drogo’s funeral pyre.

From then on began Dany’s campaign to win back her birthright. With a savior-like stance, she raises an army of Unsullied and unites the Dothrakis under her banner. Tyrion Lannister, with Varys and Jorah Mormont, now make her team of advisers. With Yara and Theon’s Greyjoy faction, House Martell and House Tyrell, she sailed to Westeros. Though Cersei took out her allies rather deftly, the newly crowned King in the North, Jon Snow politically pledged his allegiance to her while she promised to help him defeat the White Walkers.

A New Targaryen in the Mix

The season 6 finale revealed that Jon Snow isn’t Ned Stark’s illegitimate son, but his nephew through Lyanna Stark. Lyanna died during childbirth leaving her son in Ned’s care. It was implied that Rhaegar Targaryen is Jon’s father, though it wasn’t confirmed. Nevertheless, Ned names his nephew Jon Snow, as is customary for illegitimate children in the North. Jon was raised better than most illegitimate kids in the Seven Kingdoms, though the stigma was always there.

As we’ve come to know, Ned, the moral compass of the corrupt-to-the-bone Seven Kingdoms, sullied his honor by claiming Jon as his bastard son to protect him from Robert. Cersei’s deceased husband hated Targaryens to the point that he wanted to wipe them off from the face of the earth. If he could send assassins after a baby Daenerys, he could very well murder Lyanna’s son with Rhaegar.

Season 7 dropped hints that Jon is not only a Stark-Targaryen but a trueborn son of Rhaegar! The Crown Prince annulled his marriage to Elia Martell to have a secret wedding with Lyanna, which makes Jon’s birth legitimate. As it turns out, Robert lied about Rhaegar kidnapping Lyanna and actually rebelled because he was humiliated. As Bran put it, Robert’s Rebellion was “built on a lie.”

Lyanna named her son Jon Aegon Targaryen, which Ned decided to not use in order to cover up his Targaryen connections. Rhaegar’s eldest son, Aegon, was killed by The Mountain during the Sack of Kings Landing. In the books, Varys had switched baby Aegon with a peasant child and the real Prince Aegon grew up in exile. But the show leaves out this character.

Rhaegar was obsessed with the prophecy of the “Prince Who Was Promised” and even thought he was the hero of legend. However, he reconsidered and decided one of his children is the prophesied Prince. But a dragon has three heads, he said in a vision Dany saw. Elia Martell was too weak to give birth to a third child and he legitimized his son with Lyanna.

Dany is now in Westeros to re-establish the Targaryen dynasty. But only Bran, Sam, and the viewers know that Jon is actually Aegon, the son of her brother, the former Crown Prince. This makes her nephew’s claim over the Iron Throne bigger than hers. Rhaegar and Dany have a large age gap and he died before she was born. So, that’s why Jon and Dany are close in age, even though she’s his aunt.

And they also appear to be following the Targaryen inbreeding tradition in the season finale. Throners are already predicting a new Targaryen will be born out Jon and Dany’s romance in season 8, which is speculated to be more than a year away.